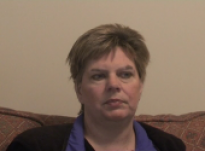 Age at interview: 50
Brief Outline: Following a total hysterectomy at age 37, Jackie was prescribed HRT. Severe symptoms in the past year led to increased dose of HRT and testosterone patches for energy. Feels depressed but draws strength from an online menopause support group.
Background: Jackie is not working at present. She is married with an adult stepdaughter. A premature menopause followed a total hysterectomy at age 37. Ethnic background/nationality' White British.

Jackie’s experience of the menopause dates back to the age of 37 when she underwent a total hysterectomy following years of pain from severe endometriosis. This led to a premature menopause and treatment with HRT patches (Evorel 50). Although experiencing some problems with depression, the relief from pain and the oestrogen replacement through HRT enabled her to have a relatively trouble free period until a year ago when she began to suffer from anxiety and heart palpitations. She describes feeling so bad that she thought she was dying.

Jackie saw her GP and asked to be referred to a consultant at the menopause clinic. As her body appeared to be no longer absorbing HRT effectively, she was prescribed an increased dose of HRT (Estradot 75mg) and, at her suggestion, testosterone patches to increase her energy levels. The new treatment regime has helped her function in her day-to-day life and she plans to stay on HRT indefinitely despite suffering from high blood pressure. However, she still has trouble with depression particularly in the morning. She has experienced depression in the past and tried antidepressants (citalopram) briefly but did not feel well on these so discontinued.

Jackie finds the online support group Menopause Matters helps her get through – in fact, she checks the forum everyday and posts her own messages from time to time. She has used this when feeling low as a way of getting support from other women, and a sense of not being alone. She acknowledges, however, that the website can throw up a range of symptoms and lead to further worry.

Her experience with the medical profession has been mixed. She feels GPs just do not have the time or sufficient knowledge to treat menopausal women. Much of her learning about the menopause has come from accessing websites and it is this knowledge which she has used in consulting professionals. She feels that there should be groups for menopausal women set up in GP practices so that women have a chance to discuss their experiences with each other.

Jackie was interviewed for Healthtalkonline in December 2008.

And I think he was scared and worried with me. Definitely. He came to the doctors with me a few times, he even came into the surgery when I was at my worst where I, because I was so overly emotional as well. I mean that’s the bit that the hormones level out, they stop you from feeling like you want to burst into tears all the time. I certainly was feeling that. The least bit thing and I would fill up and I always assumed that I would start going to pieces once I went into the doctor’s surgery and talked about it. I managed still to get my point across really. But [husband] came in with me a few times and he’s tried to understand but I think it’s very difficult to get it, how can they? They don’t feel things in the same way that they don’t feel the sensations that you’re feeling, like that they’re putting you into panic mode. But he’s probably more aware and more supportive than a lot of partners would be. But there’s times when he’ll maybe switch off a bit and I find it hard going getting him to. It’s all like because I’m a bit better, as though I’ve got to be like right, that’s it get on with it kind of thing. But he wouldn’t say that but I could tell by his attitude that he would perhaps think I should just be able to act as though nothing’s happening. But it’s not like that.

Do you think it’s affected your relationship?

Well it has but I’ve learnt to live with that because I’ve been living with it since I had my hysterectomy really. I would say the way we are together we’ve got a challenging relationship anyway, but because we’ve been together such a long time we’ll always work on finding ways to get over those challenges and so far we’ve managed that.

I had contact with them from when I was surgically menopausal sort of thing. And I knew that the sorts of symptoms that you can encounter could be a bit like a drug withdrawal because your oestrogen if it goes deficient has that sort of bodily effect sort of thing. And so I was thinking right it’s looking as though maybe I need my oestrogen upped but I had to tell my doctor that’s what I thought it was looking like. But she was helpful. And I also felt as though I really wanted to chat with a gynaecologist again, or like a menopause clinic, something like that where a bit more specialist because GPs are sort of cover all for lots of conditions but aren’t always equipped to go into depth with one in particular. Well certainly the menopause is one of the overlooked ones I would say.

Well, I’d have to be honest and say that you feel pretty much on your own even though you’re going, you’re still just a number and you’re being steered in directions that they’re familiar with and they don’t tend to look round the subject too much or treat you as an individual I would say. Definitely.

Are you talking about GPs?

Both, GPs and the people that you come upon in hospitals. I think essentially that’s something you might have to accept because hospitals see an awful lot of people and they can’t tune in to you personally just like that. I think it would be wrong to expect that but I think there’s a lack of care in the way that they approach how they deal with you. They do tend, you do feel a bit as though it's a cattle market and just you know right, next sort of thing.

Jackie had a hysterectomy for endometriosis when she was 37 and was glad to be rid of those...

Jackie had a hysterectomy for endometriosis when she was 37 and was glad to be rid of those...

Some women talk about the menopause as marking entry into old age. Now for you the menopause happened in your thirties, how did you feel about that?

I didn’t give a damn. I just was pleased to get rid of those ovaries and get rid of the periods. That was the only thing. All this about I’m not a woman, I’ve never ever felt anything like that. I’m not interested in that but I know that a lot of women think it’s the end of you as a young woman but I’m not like that in my head. I can honestly say I’m not. But because I suffered so badly for so long before I had my operation and I wanted the operation to be able to move on to a better quality of life. I didn’t care that I was in the menopause. I knew that I was there and there were challenges ahead. And it hasn’t been easy and it still isn’t and, you’ve got to be strong to deal with it.

Jackie posted comments on an internet forum and found that the replies were a massive support.

Jackie posted comments on an internet forum and found that the replies were a massive support.

Tell me about the forum, how that works for you and the Menopause Matters website?

I can’t quite remember how I stumbled on it really but it must have, it was earlier in the year when I think I must have been looking, when I was feeling at my worst. And I must have Googled menopause or something on the internet and Menopause Matters must have come up and so I must have gone into that. And I’ve never been off it ever since really. It’s just one of those that has the information that you need. I mean that was where I found out about the Estradot different dose patches that you could try. That was where I found out what I believed already about the testosterone, the role that that plays on mood, well-being what have you. I found out about that on there, extra about that and then just really going into the forum. I mean I did post a few times myself when you’re feeling really desperate and you can put on that you’re having a desperate day, any advice, and women would come back and sort of say that they had felt like that at times and it’s a massive support definitely. And I just still check it most days just to see what subjects people are coming up with and I think that’s the way of keeping on top of what you’re likely to come up against really.

Only if you read something, you can sometimes panic a bit more. Like you might read something oh crumbs, oh yeah, and so sometimes if you’re in panic mode, which takes nothing to set when you’re going round with anxiety and being on edge, it takes nothing to make you feel more panicky and that’s what I’ve been like a lot this year. It does hit some women more than others I think.

So I wouldn’t blame the menopause but it can certainly make it really difficult when they [partners] can’t empathise properly with what you’re feeling. And I think a lot of women just, their husbands just shut off from them completely. I can see from what I’m reading on there [website forum]. But we’ve always had where [husband] wouldn’t get the chance to switch off from me. And that advice for husbands bit that is set up on the Menopause Matters forum, well on the website, it’s a great long print out of all the symptoms that you’re likely to feel and I print that. I tried to get [husband] to read through it oh a good lot of months ago and he didn’t take enough notice and I was having a really rough few weeks, probably after moving here and after my dad died and stuff and I felt as though he was, he’d lapsed a bit and wasn’t really accepting that I was still going through this sort of thing. And I said, look, I feel as though you’re not trying hard enough to understand why I’m still pretty up and down and find it difficult to be normal really and I made him sit and read it. I said look, I want you to print that off and read it properly and take in what it says. But I had to push him to do it. But he did, he read it and I said, because it’s a good description of how the symptoms can make you feel and how dreadful it can be, I said “it doesn’t sound very nice does it?” And he said “No, it doesn’t” and so I think he’s more aware than a lot of people and he tries, he tries sort of thing.