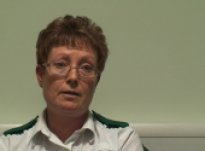 Age at interview: 47
Brief Outline: Like her mother, Jill started the menopause early. A Mirena coil, fitted to regulate heavy and painful periods, has had limited success. Mood swings, hot and cold sweats, thrush, cystitis, and loss of libido have also affected Jill's well-being.
Background: Jill is a public enquiry officer. She is married with two teenage sons. She started the menopause at age 40. Ethnic background/nationality' White British.

Like her mother, Jill started the menopause at age 40 when her periods became very heavy and ‘totally irregular’. Feeling drained, she consulted her GP and was fitted with a Mirena coil. Reassured that this would solve her bleeding problems and avoid the need for a hysterectomy, Jill enjoyed a period-free six months before her periods returned. Though intermittent, they have been extremely heavy with big clots and accompanied by severe pain which Jill describes as ‘like giving birth’. At times she has had to take time off work, and the pain has interfered with her enjoyment of leisure activities.

Jill’s menopausal symptoms have also included hot flushes and sweats which she has managed at night by opening the window or putting her leg out of the bed. She also reports feeling shivery at times even when in a hot room. Despite her symptoms, Jill prefers not to take medication and is therefore reluctant to go on HRT.

For Jill, possibly the worst symptom of the menopause has been her ‘Jekyll and Hyde’ mood swings. At first she thought she was ‘going crazy’ but has since come to understand her moods as part of the menopause transition. Although her husband and sons have been very supportive, she feels it has been wrong to subject them to her moods.

Although gaining considerable weight in recent years, Jill has successfully controlled this through healthy eating and exercise. She has also suffered from thrush and cystitis which she has treated with over-the-counter medication. The menopause has also had an impact on her relationship with her husband. Despite loving him ‘to bits’, she has ‘lost interest totally in sex’ and puts this partly down to vaginal dryness. She has not considered using lubricants or discussing this with her GP, however.

Alongside her symptoms, Jill has had to deal with her brother’s death from cancer and caring for her father who has had a stroke. These events have added to the difficulties of the menopause transition. She describes the female reproductive life as ‘like a curse’ and wishes women could ‘just switch it off if we don’t want it anymore’. For her, ‘a decade of symptoms’ is ‘more than enough’. She hopes there’s a ‘light at the end of the tunnel’ when she can put the menopause and its symptoms behind her.

Jill was interviewed for Healthtalkonline in March 2009.

Jill had a Mirena coil fitted to help regulate her heavy and painful periods. The bleeding...

Jill had a Mirena coil fitted to help regulate her heavy and painful periods. The bleeding...

And it just started initially with I suppose physical things, totally irregular periods. Sometimes I’d miss a few months and then it would come back, it was just all over the shop. I went to the doctors because of this problem and she decided to fit me with a Mirena coil. That was four years ago. How that was sold to me as “You’ll never have any period problems ever again. It’s 99.9% sure you don’t have periods again.” And it usually starts to become effective within three months and a year later I was still having periods. So I went back and obviously kept just delaying it I think because the doctor was thinking, well if this didn’t work I’d have to have a hysterectomy. And I know that’s a big operation and I wanted to give it a bit longer. What happened after about a year of having the Mirena coil fitted was I did stop for quite a few months, probably about 6 months and I thought great. Felt better in myself, thought this is it. But it came back again. And that’s how it’s been really for the last four years. I can go several months without a period but then it comes back and when it does come back oh it’s awful. I have the pain and I can describe it to you because I have given birth, it’s like giving birth.

Well sometimes perhaps I’d only go two weeks and then it’d come again, then I could go eight weeks and then it would come. Sometimes it would be extremely heavy and big clots and other times it was very light browny treacly-fied. She [doctor] did explain initially that some of this bleeding was perhaps old blood that was already inside the womb. But obviously when the blood was coming out like beetroot coloured, that’s to me fresh [blood]. And I did ask the question “Well if it’s 99% effective why hasn’t it been with me?” And she just said “Well Jill you’re that 1%. We can’t guarantee anything.”

I think well it is telling you isn’t it that you can’t have babies any more and you do still get that maternal feeling when you see a baby, well I do anyway and it’s marking isn’t it that really you’re getting old and shrivelled up aren’t you? But yeah it is a sign of ageing isn’t it?

Well you mentioned ‘the change’, ‘the change’ of life. To me it’s a women’s body clock telling her that the game’s over. No more baby making. Yeah.

Are you sad about that?

Now women talk about other effects of the menopause, other symptoms like loss of libido, vaginal dryness those sorts of things. Have you noticed any changes with that?

Yes. I’ve lost interest totally in sex. I love my husband to bits I adore him, I love a kiss and a cuddle. That means more to me at the moment but I’m just not interested but that’s not to say that I don’t love my husband because I do very much. And he knows that.

And it’s not important to me at all because I show my husband I love him in other ways and I don’t mind a kiss and a cuddle.

And he’s very understanding and he knows it’ll pass.

Jills mood swings left her feeling like Jekyll and Hyde

Jills mood swings left her feeling like Jekyll and Hyde

And those are the physical sides of it and the other side is the mood swings. I can be up and down, up like that. I don’t know where it comes from. It’s almost like you’re a Jekyll and Hyde and I know it’s me and I know sometimes what I say or what I do but I just I can’t control it. And some things my family, we laugh about, I mean I have been known to fill my bath water up with cold water. And wondering what happened when I try and get in the bath and it’s freezing cold and they just say to me “Mum you’ve put the cold water on instead of the hot.” “Oh.” You see. I’ve mislaid things and nine times out of ten my family find it in the bin, I’ve thrown it away. Lots of silly things but as I say my family are used to it. But the worst thing is if I do go up like a bottle of pop as my family say, I think it’s wrong sometimes how they have to have the brunt of it and my husband stays really supportive and he’s explained to the boys what I’m going through and it’ll pass. And they’re fine yeah.