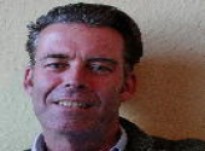 Age at interview: 52
Brief Outline: Kenneth was in New Zealand when he was attacked by a gang who beat him up. He sustained a traumatic brain injury.
Background: Kenneth is a volunteer gardener. Before his traumatic brain injury he ran his own business. He is single and lives alone. Ethnic background' White/Gaelic/Scottish.

Kenneth was born in New Zealand. He moved to London in the 1980’s and later developed and ran his own clothing business, starting online and then opening a shop.
In 2007, he returned to New Zealand to visit his mum who had a heart attack. While he was there he was seriously assaulted by a gang and sustained a traumatic brain injury. He spent several days in a coma.
When he came round from the coma, he went into rehabilitation to help him overcome the difficulties he had following his injury. He had problems walking, balancing, talking and remembering, and experienced severe fatigue.
Kenneth was unable to return to work following his injury because he would be “falling apart” if he had to do a 40 – 60 hour week. He manages a three day week now as a volunteer gardener.
He thinks that being unable to go back to work is one of the factors that lead to social isolation problems for survivors of brain injury, because when you lose a job “people don’t have the same reason to keep in contact with you”. He feels people have “a natural fear” of things they don’t know much about, like brain injury, and that survivors are stereotyped as “mad” or that they’ve “got anger management issues”.
Kenneth does not like socialising because it involves “being in a room full of loads of people” who are “drinking and bumping into you”. He also finds being on the tube difficult because there’s “too much movement, too much noise”.
A psychologist once told Kenneth that living with brain injury is like a game of snakes and ladders. He thinks this is a good analogy and wants other survivors to know that “there’s a lot of ladders there to climb up slowly, but be careful because if you push too hard, you’re going to come flying down one of the snakes.” He also said, “You get used to it (brain injury) and things do improve ever so slowly”.

Kenneth said others thought he was responsible for his injury; ‘if you’re the victim of crime,...

Kenneth said others thought he was responsible for his injury; ‘if you’re the victim of crime,...

View topic summary
SHOW TEXT VERSION
PRINT TRANSCRIPT
You got to wonder whether it’s all been changed for some reason or not, you got to wonder about that, whether it’s God’s will or something. I don’t know. Highly unpleasant to say the least. But yeah, you’ve got to wonder why it happened to you anyway. I mean most people are going to think that, why me? You know, what have you done? I don’t know. Apparently I overdress. There we are. So, yeah, I guess I have been dressing down for a while. I certainly have, you know, actually for a long time I really wouldn’t get dressed at all, you know, in my regard to dressing. Dress down I suppose.
You would have dressed down since your injury?
Oh totally. Yeah, you feel much more vulnerable well you’re well dressed. You know, nice three piece, Harris Tweed. Saville Row tailored suit, well you know... I mean I suppose that’s part of the reason they say, you know, you’ve drawn attention to yourself. But, you know, when that’s what you sell, that’s what you’re going to wear so. That is the downside to that one.
And who suggested that you overdressed or that you dressed too well?
Well, you know, somehow it’s, I think people like to think it’s your fault somehow, that you encouraged it. You know, I think that’s the idea. I think generally most, somehow if you’re the victim of crime, somehow you asked for it. That’s what people are trying to infer. Well… that’s what, yes a lot of, someone’s got to be guilty and if they can’t find the person then obviously it’s you. And I suppose dressing in a certain way will draw attention to yourself, much in the same way if a women is raped, you know, the idea that she might have dressed in an inappropriate way has drawn attention to her, and therefore that’s the reason. Well it’s that kind of logic.
But you know, if you work in the world of fashion you just sort of, that’s just the way it is, you know. It would not be possible for me to function badly dressed really. It just wouldn’t work. Casual’s fine. But I’m perhaps a little bit too sharp for some people.

For Kenneth nothing is secure anymore and focusing on the problems you have in order to claim...

For Kenneth nothing is secure anymore and focusing on the problems you have in order to claim...

View topic summary
SHOW TEXT VERSION
PRINT TRANSCRIPT
I don’t think anything’s secure any more. I think, you know, we’re in unchartered waters so to speak. Anything could happen.
And do you just get DLA or are there any other types of benefits, like employment support or housing benefit? Any of those apply to you?
No it’s just the DLA really. Disability Living Allowance. I’ll check for you.
Okay.
Yes, DLA. I’m never quite sure. They keep changing the names of things as well. I must admit, you know, it’s all a bit dreary having to focus on all that stuff all the time.
Well you know, and having to sort of prove to people that you’re not that well, or you’ve had problems or you’ve got issues or whatever. You sort of could do without that – hardly cheerful stuff. You just know that every time you go to one of those things it’s going to bleak-ish. It’s not going to be pleasant. No, you know, things are changing so fast, that well you just have to accept that. You know, we’re all in this together. So well, I suppose we are.

Kenneth thinks that the media contribute to people with brain injury being stereotyped as “mad”...

Kenneth thinks that the media contribute to people with brain injury being stereotyped as “mad”...

View topic summary
SHOW TEXT VERSION
PRINT TRANSCRIPT
As soon as you hear of brain injury it’s natural that you’re going to feel slightly concerned for your own sake. Well actually I’ve found that most people are more likely to do harm to themselves than anyone else. I would say. It’s more likely to be an issue of self-harm rather than harming anybody else, which is what people worry about I think. I think people are concerned that you might have an anger management issue of some sort. But not really no. I haven’t really seen people turning on each other. It’s more turning on themselves, which is natural. Well I mean your whole as you know is completely destroyed and then you’ve got to try and patch it all back together if you can, which is not really possible.
Well you know, when you’re watching television or you’re reading newspapers, they always talk about something that’s happened in the media somewhere. It’s always commented on in a certain way. So you’re sort of stereotyped as a sort of a mad person. You know, then somehow you’re dangerous or something or that, you know, you’ve got anger management issues and so on. And I’m sure in the beginning that some people are in that situation. So yeah, you will get socially isolated. I mean that’s guaranteed.

After he was unable to go back to work, Kenneth could not afford to go out and see his friends....

After he was unable to go back to work, Kenneth could not afford to go out and see his friends....

View topic summary
SHOW TEXT VERSION
PRINT TRANSCRIPT
Because all the people that you used to deal with day in and day out, well that’s all gone. It’s like the same if you lose a job, that’s going to be socialisation or isolation’s going to start kicking in slowly. Because people don’t have the same reason or the same motivation to keep in contact with you, do they? But I mean also financially you’re going to be isolated. I mean you haven’t got any money to go anywhere really, have you? And you don’t want to be turning up broke all the time. People soon get weary of that one. That doesn’t, that’s not going to last is it? So you are going to be isolated.
And I think there is a natural fear that people have after you’ve had anything, oh you know, that’s a brain injury, ooh that sounds nasty, but – which it is – but people would wonder, there’s slightly, you know, there’s a always a question mark and you never get rid of that one.

Because of the effects of his injury and his paranoia about his safety, Kenneth does not like...

Because of the effects of his injury and his paranoia about his safety, Kenneth does not like...

View topic summary
SHOW TEXT VERSION
PRINT TRANSCRIPT
It’s probably partly paranoia, you know, that you’re in fear of something happening. I mean certainly after the bombing of London, you know, when I had the shop. I mean I wouldn’t get the tube to work. I was slightly at that stage paranoid about the tubes. I just walked to work, an hour there, an hour back, makes it a bit harder, but I just couldn’t for a while. So I mean whether that’s paranoia or not I don’t know. But I don’t like being in situations where there’s hundreds of people around moving in different directions and bumping and just doesn’t appeal to me at all. Well in terms of change in the past, I would have been more than happy. In fact it would have been part of my life really. Socialising. But now I can do without it, quite happily.
Why is that?
I suppose it’s a bit of an unnatural fear I suppose. Too many people, too much movement, too much noise. I can’t sort of filter it out. It’s just too much. It can send people into a bit of a spin almost. Or, you know, even with the fatigue thing, you know, sometimes I’d be on the tube coming back from Rehab from UK, coming back to [local tube station], and I’d wake up in Uxbridge, because I’d fallen asleep on the, on the tube. So you really don’t want to be heading out to London, knowing full well that it’s possible that you might just be having a bit of a nap and end up in Uxbridge, which is a nice place, but there again I wasn’t planning that.
Okay.
You’re just going to cut back on a lot of things. I mean, social isolation’s partly your own fault in a way, you just don’t want to socialise to the same degree. No.
Previous Page
Next Page