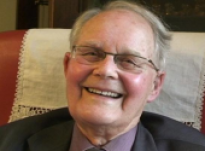 Age at interview: 88
Age at diagnosis: 80
Brief Outline: John was diagnosed with prostate cancer 8 years ago. He receives regular hormone implants, which has lead to some side effects including an impact on his sex life. He has accepted that prostate cancer is unlikely to end his life, and doesn't think about it much nowadays.
Background: John is a retired director of technical services (chartered civil engineer), but still works as a Methodist preacher. He is married with four children aged 55, 53, 51 and 49. Ethnic Background: White British.

John had an instance of blood passing and decided to ask for a PSA test. The blood had nothing to do with the cancer, but led to his diagnosis of prostate cancer. He was aware that it was a common cancer, and that most people don’t die from prostate cancer but from something else in the end. He didn’t feel that surprised or shocked when he was diagnosed. During the war, John worked in bomb disposal, and accepted the possibility of instant death. He thinks this and his Christian faith helped him take his diagnosis in his stride and recognise that death is a part of life.
John feels that he got very helpful information that helped him understand how hormone therapy works to keep the cancer under control. His treatment involves a hormone implant every three months. There are some side effects of the treatment, including weight gain around the stomach, hot flushes and weakened bones. Having the hormone treatment also means that his sex life has been affected. However, he and his wife felt that they haven’t had much support in that area. He knows other people who have had depression and major fatigue from the hormone treatment. John now gets an annual checkup for his PSA to see what his level is.
John also has a heart problem, which he thinks is more serious than having had cancer. He tries to offer help to other people, and to encourage them that there is life after the diagnosis. He doesn’t think about cancer every day, usually just when he is due for his hormone implant. His advice to other people with cancer is to take a positive view of life, take the treatment, and forget about it.

Hormone therapy for prostate cancer has ended John’s sex life but at age 80 he has not sought...

Hormone therapy for prostate cancer has ended John’s sex life but at age 80 he has not sought...

View topic summary
SHOW TEXT VERSION
PRINT TRANSCRIPT
I don’t know whether you wanted me to say anything about my wife. There’s one thing I haven’t mentioned, of course, this particular treatment does effectively make you cease your sex life altogether. Now, whether if you’d expect to enjoy such things in your eighties is a moot point but if anybody prizes highly a continuing sex life then I can see this being a great disappointment.
And is that something that was mentioned in the information that you got at the beginning when you…?
I can’t remember whether it was mentioned or not. Logically, I realised it would do so because you’re told that it is to cease the production of semen, and if so then the effects of that are pretty obvious. I can imagine an eighty-year-old who’s just married a nubile twenty-five-year-old with great, very, disappointed.
And is that something that you’ve been able to talk about to your GP about or have they given you any advice or not?
No, no advice about it. I’ve grumbled occasionally but then that’s just a grumble.
You mean you’ve grumbled about it with your GP or to your…?
And probably I’ve grumbled about it to my wife but not otherwise.
And is that something that you think you would have liked to have had some support for?
Frankly, at my age I couldn’t have expected it.
You never know. I mean I think if you were to mention it they would probably be able to provide some advice or help.

Oh, yes, I mean the last time I mentioned it there was some sort of murmur about help, but frankly, I think mutually we’ve settled down to a relationship that doesn’t have to include active sex.

As well as having had prostate cancer, John has developed a heart condition and problems with his...

As well as having had prostate cancer, John has developed a heart condition and problems with his...

View topic summary
SHOW TEXT VERSION
PRINT TRANSCRIPT
So as well as having had prostate cancer, do you have other issues, you mentioned a heart problem and…?
Yes, I have a heart condition, not excessively bad, but I have to be careful about, I don’t climb hills anymore and I avoid staircases as much as I can. I already had to give up tennis and badminton because I got problems with my joints, so I play a game of bowls regularly and walk a little.
This may be difficult, but in terms of other conditions, say, for instance, having a heart condition, where or how difficult has it been to live through having been diagnosed with cancer? I mean has it been more serious or less serious than other health issues in your life, do you think?

I think it’s probably less serious than the heart condition, in a way, because my father and my brother both died of heart problems, and therefore I’ve always been aware that this is a much more likely thing to happen. I should imagine, when I eventually die, it will be probably with the heart rather than the cancer.