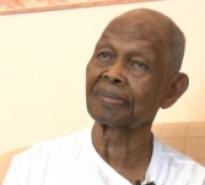 Age at interview: 94
Brief Outline: In 2012, Ethelbert had a tumour removed from his larynx. This affected his voice and he can now only talk very quietly. He takes ramipril to control his blood pressure and recently started a course of medication to shrink his enlarged prostate but otherwise enjoys good health.
Background: Ethelbert is a retired builder. He came to the UK from Barbados in 1959. He has been married twice and has six adult children. He has been widowed for 20 years and lives by himself independently. Ethnic background: Afro-Caribbean.

Ethelbert is a very active 94-year-old. He retired aged 64 to look after his first wife who had had a stroke. After her death, he remarried, but for the last 20 years he has been widowed and living by himself. He enjoys listening to music, cooking and baking and spending time with his family and friends. His daughters live nearby and support him doing his grocery shopping and coming along to doctors’ appointments. Ethelbert says he eats a tasty rather than a healthy diet but believes that what makes you happy is also good for you.

In 1993, Ethelbert had an operation for prostate cancer from which he recovered well. However, a few months ago he noticed that he had to go to the toilet much more often. Hospital tests showed that his prostate was enlarged. His GP suggested that instead of having another operation, this could be treated with medication, so Ethelbert is currently on a six-month course of tablets to help shrink his prostate. His GP explained that the prostate and kidneys work together. He told him that his kidneys are currently alright but are being checked regularly. Ethelbert gets invited for annual check-ups at his GP surgery to have his blood, blood pressure and urine tested. He is content to have these yearly ‘MOTs’ but does not feel particularly worried about his health, which he thinks is pretty good for his age. Last year he had to have a blood test repeated, but thinks this was probably because the original test results got lost. He has not been given much information about the tests he is having but then he has not asked for it. He feels confident to ask questions of health professionals if he needs to. Ethelbert thinks doctors need to know their patients well enough and be wise enough to decide how much information each individual patient wants and can cope with.

In 1995, Ethelbert had a pace-maker fitted, which was replaced in another operation a year ago. Apart from his current medication to shrink the prostate, he takes an ACE inhibitor (ramipril) to control his blood pressure. The only medication side effect he sometimes experiences are occasional spells of dizziness, especially when bending forward. His doctor advised him to lie or sit down and rest until the dizziness passes, and this has worked well for him.

Two years ago, in 2012, Ethelbert had a tumour removed from his larynx. After the operation he lost his voice. He was given a course of steroid injections, but they did not make much difference in his view. He can now hold a conversation face to face, but finds it difficult to communicate on the telephone. He also finds he gets tired after extended stretches of talk. After speaking to a friend who uses an artificial mouthpiece, Ethelbert asked his GP and specialist whether he could have something similar but was told he does not need it. Getting his voice back is his main current health concern.

Ethelbert thinks that sometimes telling patients too much information can do more harm than good. Doctors need to know their patients as people and have the wisdom to decide how much to share.

Ethelbert thinks that sometimes telling patients too much information can do more harm than good. Doctors need to know their patients as people and have the wisdom to decide how much to share.

View topic summary
SHOW TEXT VERSION
PRINT TRANSCRIPT
And at what point would you expect your doctor to tell you that you have a- a decrease in your kidney function? When do you think it would be important for you to know about it?

Whenever he thinks is possible. He might not want to scare me. Because some doctors have got to take patients as they find them. And by telling certain patients certain things, it might make them become more ill.

You see. You’ve got to have the confidence of the patient in the beginning, then you can tell him anything and you feel able to tell him certain things or withhold certain things from that particular patient. And the doctor has got to be sensible enough to know who he’s dealing with.

So you think that’s part of what a doctor needs to decide, is how much to tell each individual patient?

Yes, I think that is it, yes. He should learn - should know his patient so he’s ready to tell him everything.

Might be difficult though if you see different doctors all the time.

Yeah but if you’re seeing different doctors, they just look at your history, isn’t it? [laughs]. And each doctor has got their own interpretation of each patient they’re seeing. But it you’ve got a regular man like I have and we can sit and have a talk like you and I talk now.

You see. So I think the doctor himself, he has to be capable of that and wise enough to know to whom he’s telling these stories to.

Ethelbert doesn’t remember ever being given any verbal or written information on what he should or should not eat; he enjoys his food and eats whatever he wants whenever he wants it.

Ethelbert doesn’t remember ever being given any verbal or written information on what he should or should not eat; he enjoys his food and eats whatever he wants whenever he wants it.

View topic summary
SHOW TEXT VERSION
PRINT TRANSCRIPT
Have you had advice on keeping your fluid level up, making sure you drink enough?

You drink plenty anyway, do you?

But you haven’t been told explicitly that that’s what you should do.

Have you been given any guidance on what to eat, diet, that sort of thing.

By a doctor or a nurse.

And you’ve not have some sort of general consultation or some leaflets about healthy eating from your doctor?

And I eat it, everything that I fancy.

And would you say that you eat a healthy diet? or just an enjoyable diet?

What I eat I enjoy and other people enjoy it too [laughs].

[Laughs] You sometimes cook for friends as well?

Yeah and my daughter comes here every Saturday, she and her partner.

And my grandchildren, great-grandchildren come in here and when I tend to bake bread for them all, that sort of thing.
Previous Page
Next Page