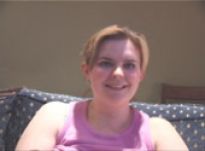 Brief Outline: For DTaP/IPV/Hib' Followed recommendations of health professionals. Talking to other parents whose child had MMR and using the Internet to gather information on both sides of the argument helped her to make a decision about her daughter's MMR immunisation
Background: At time of interview' married, one daughter, aged 10 weeks. Parent's occupation' Mother- Jeweller, Father- Jeweller. Ethnic background' White-British.

Thought there was not sufficient evidence to not give her daughter MMR.

I discovered through reading up on, on this issue that if you choose to have a single immunisation programme you have to have six separate jabs instead of the two that you have for the MMR. And obviously if the time in-between having the jabs, these six jabs, your child isn't protected. So it's, it's again heightening the risk of catching one of these diseases and of your child maybe passing the disease on to a pregnant mother, whatever in the case of rubella.

The fact that MMR is done so worldwide, used so worldwide I think over a hundred countries have used it since it was introduced in '88 I believe, suggests that if there really was such a massive problem they would have pulled it off straight away, the Government would have taken it off the shelf straight away because I can't, you know, I can't believe that they would put, you know, the nation's children at risk that seriously. I think that if I had read different, a number of different reports suggesting that the evidence they'd come up with was, was very clearly, you know, in favour of getting rid of the MMR I would have thought again. But because it was just this one gentleman's report and the fact that I believe I read as well that after the Lancet published the report they suggested that he had conflict of interest because he was at the same time looking into the whatever it was the MMR vaccine influence on these, some children that were autistic. It, it does make you think, 'Mmm maybe, I don't, I don't think I'm going to pay too much attention to it. I think that the thousands, well, millions of children that are immunised against it that are actually okay.' I think it's the way forward for me and my baby basically. That was how I reached the decision for us.

Assumptions shouldn't be made that parents will immunise their children and more information...

When I went to have my first set of jabs for the baby, you, we were just given them, you know, you were saying this is your DTP whatever, no-one really tells you what they're for, it's pretty much left up to you to go, go away and find out what these things are for. I don't think there's as much information out there about jabs for small children as, as there should be. And it's more presumed that you will go ahead with them whatever. It would, it would be nice to be given the choice.

And what information do you think you'd have wanted?

I would've wanted to know what the downsides would've been if I hadn't chosen to have the jabs. I would want to know about all the diseases a bit more in-depth that I'm immunising against. I would liked to have known if there was other options available to me if I had to have them there and then, or if I could choose to have them separately? Yeah, things, things like that. There was really no, to be honest, there was really no information given at all, it was a presumption that you would have, have the jabs. And okay yes, I understand that people are, these jabs are being given because a lot of research has been done and it, they've been proven to be the best way forward, but it's always nice to be spoken to as, as a human being and being told why, the reasons why and why it doesn't make sense not to do it.

Believed the Government would not back an immunisation programme that was unsafe.

There's a lot of basically indecision around. I spoke to well, five or six mums, one of them had chosen to go the route of the single jabs and pay privately and interestingly enough she actually works in the healthcare industry. She said that the reason that she has decided to do it was because she would never forgive herself if they then did decide that there, there was some truth in the finding of the Wakefield report.

But all the other people that I've spoke to said, “Yes it's very difficult, it's a very difficult decision to make.” But I think they decided that the Government again, like me, couldn't possibly back an immunisation programme that was unsafe. As a result, probably five out of six of us are going ahead with the MMR programme. Yes, but there is concerns I mean following the BSE Crisis a few years back I think, you know, the general public did lose faith a bit in the Government and their honesty as to what goes on with the healthcare issues but no I feel that the MMR is the right thing to do, but like I've probably said earlier, if there had been a lot more reports and more evidence that there was problems then yes I would question it.

Her relative was seriously ill from mumps which influenced her decision to vaccinate her children.

The other thing that really affected me was when I looked at what it said about the downsides of not having the, following the MMR programme and the fact that the whole, all the problems that had come about as a result of this whole this report were people in their hundreds refusing to have, follow the programme through. And I mean the three diseases that it's talking about mumps, measles, rubella are really serious diseases.

A relative of mine basically had [mumps] when he was very young and starting convulsing and I think he was very seriously ill. Yes his mother said it was not a joking matter at all and she really thought at one point that she might lose him. So she's, you know, very much for the immunisation programme, definitely.

She was amazed that to find that so much fuss had been made over just one research study.

Show in context
SHOW TEXT VERSION
PRINT TRANSCRIPT
Yes so I was interested in looking into what Andrew Wakefield had said on his report. What I discovered was that he had linked the MMR jabs along with the bowel, inflammatory bowel disease and also autism. Obviously these, this is a concern, what I then went, I thought there must be more information on this, there can't just be one person's report that has caused this whole furore. But it really did appear that it was just this one report. And that lots of other reports have looked, looked in to his report and had come to the conclusion that there was no real evidence to suggest as yet that the things were linked.