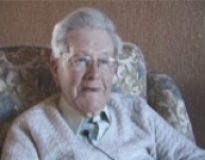 He was diagnosed with a tired heart and explains some of the difficulties he has had since.

He was diagnosed with a tired heart and explains some of the difficulties he has had since.

View topic summary
SHOW TEXT VERSION
EMBED CODE
PRINT TRANSCRIPT
And I went to the doctor up there, he gave me ECGs and goodness knows what else and told me I'd got a very tired heart and there wasn't much he could do about it. So, fair enough, if he can't do anything he can't do anything. Anyway, just before I came out he said, 'Just a minute', he said, 'I've got an idea'. And I was already on a pacemaker, I forget how long I'd had that. But he said, 'Come with me'. Went round to the pacemaker, when I got there and they took me in and they checked me pacemaker again. And he said, 'What we're going to do', he said, 'Is.. I'm going to change your pacemaker and'' - why I don't know but it was something to do with the controlling of the heart and one or two other things - but anyway, he booked me in for the' that was on a Monday, and it was on the following Friday he had me in. And they took my old one out, put my new one in and, in actual fact they gave me the old one for a keepsake [laughs] but' we won't...

Anyway, he put that in and from that time on things started to pick up. So whatever... the idea he had, they put in a new type in or something like that, and it seemed to have a good effect, you know, and we haven't been all that bad since. But, my main troubles now is the pills I'm taking, I suffer with very low blood pressure, always have done, and so the pills they gave me was to try and look after my heart. Well then I started coughing, coughing like mad and nearly choking sometimes, and went down there and they sent me away, and' oh no, first of all they said it was fluid on the lungs. So they gave me water tablets, to clear the fluid on the lungs. This didn't do' well it started to do' something, but then everything else went wrong, you know.

So I went back down and see him and he said, 'No, we got the tablets all wrong. We'll have to rearrange them'. Because what with my heart and my, whatsit on the lungs, the tablets I was taking for my heart interfered with the tablets I was taking for my lungs. Well then they said they'd got to find a balance between the two, and that's what we've been doing. Now I think they've come to the final stages where I don't think they can do much more now. But my coughing is starting up again and that's' why I've got to go down and see the doctor. He put me on antibiotics before which done quite a lot, so whether he'll put me back on them or not, I don't know.

He experienced bad sunburn because of one of his drugs.

He experienced bad sunburn because of one of his drugs.

View topic summary
SHOW TEXT VERSION
EMBED CODE
PRINT TRANSCRIPT
I want to do lots of things but I just can't do them. I'd like to get back to my carpentry again but I can't... I like' I suppose the best thing I like now is driving. I do like to drive. But another thing about these pills I take, I mustn't get in the sun. The very first time he said, 'Don't sit in the sun', he said, 'because you'll blister'. I thought to myself, 'what a load of rubbish'! So out I went in the sun. I wasn't out there five minutes when I thought, 'my face doesn't half feel hot' and it came up like a beetroot! I've tried it a couple of times since and I just cannot stay in the sun, even when I'm driving and the sun comes in on my hands, I've got a pair of gloves. Even in the hottest day, when the sun's shining like mad, and I've got two big straw hats out there, I have to wear when I go out (to keep the sun off me face, which is very awkward in the summer) but I look like a tea-planter going along. But' I've got to do it. Sometimes when I go out and the sun comes out when I'm not expecting it, you try to keep, I even put my collar up sometimes to keep it off my neck and that but it's no good, it catches me sometimes, and I do come right up and I feel as if I'm going to blister. It's that bad, it does get bad.

He says that being able to drive and get out of the house is very important.

He says that being able to drive and get out of the house is very important.

It is, because it's virtually the only way we've got to go out anywhere. I can go and see other things and we can enjoy ourselves driving, you know. To sit indoors all day long, I just can't do it. I don't want to. Even in the morning there, if it's raining, I still go out for my walk if I can. But when we go out, if we go to [place]... we go to [place], go in the Park and Ride and then it's not a fast walk round, it's a slow walk round. You know, we get round alright, I don't' we don't spend all that amount of time in there, but if it does get a bit bad I've said to [wife] sometimes you know, I've got to have a little blow here, just for a little while. That's it.

Says that he tries to control his weight by eating mainly salad and fish.

Says that he tries to control his weight by eating mainly salad and fish.

View topic summary
SHOW TEXT VERSION
EMBED CODE
PRINT TRANSCRIPT
All the food I eat is doing as best I can to keep off calories and, you know, cholesterol and stuff like that. My food consists mainly of salad or fish, greens, fruit, mainly. We do have a, we do go mad a little while now and again you know - might have a nice pudding or something like that which I'm not supposed to have, or cream cakes, stuff like that. But that don't happen very often, I don't think it's going to make a great deal of difference. But generally speaking, the food I have is not excessive but it's quite enough and I think I'm taking the right things, even the butter, milk, low cholesterol milk and all the rest of it, low-fat milk. That's what we have, so... I can't do much more in that line to help myself.

Says that his wife reminds him to take his medication every day.

Says that his wife reminds him to take his medication every day.

View topic summary
SHOW TEXT VERSION
EMBED CODE
PRINT TRANSCRIPT
Can I just ask you if you can remember what drugs you're on at the moment?

I'll just give them to you. What' where did I' what did I do with them?

Can you read them out for me?

I can't pronounce them! [looks down to read] Aspirin 75ml, one a day, Amiodarone, 200mg, one a day, Frusemide 40mg, one a day, and Frusemide, 20mg, one a day - they've built that up a bit - [phew.] can't pronounce that [pause] or something, potassium 25' I don't know what that is, and Formax. Formax is... I used to take that once a week, and that's because,  I had a fall and damaged my bones, but that's just for bones, kind of' strengthening up my bones. But this other one I can't even read it. [tries to read it]

So how many tablets is that a day, that you have to remember to take?

...[counts] one, two three' five a day, but I do take cod liver oil and these capsules, you know, but the ones I take, medicine, is five, innit? Six. [refers to wife] What's the sixth? Three in the morning, two at dinner time'

Thought it was five.

I think your wife's saying to you, have you counted the aspirin in with that lot?

How do you remember to take them?