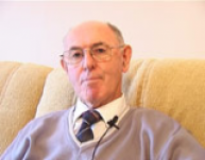 His daily routine was a two to three hour sleep each afternoon for several months after his heart...

His daily routine was a two to three hour sleep each afternoon for several months after his heart...

View topic summary
SHOW TEXT VERSION
PRINT TRANSCRIPT
When you first came home at Christmas time, what was it like those first few days at home?

Well, difficult in so far in that I didn't like, I've always been one that's helped around the house. We've worked and done things together. The main problem was sitting not being able to do my share shall we say.

How did that change over time?

Just as I became a little stronger and able to do things. I started to do different things without sort of taxing myself too much and just worked up until I was helping around the house just as I used to do. But of course it took time to build up to that point and in an afternoon, originally when I first came out, I certainly had to go to bed.

They did recommend I had a lie down and in the afternoon I did have to go to bed and sometimes it was two, three hours, sometimes more. And of course during the winter months one of the problems was I couldn't keep myself warm, my feet particularly because of the low blood pressure. I used to go to bed, get wrapped up, get my feet wrapped up in blankets and a hot water bottle and I used to manage to get some sleep.

But I must admit once I went to sleep, I could be there three hours or so. On odd occasions, my wife's came in to monitor, to see if I was okay. I suppose there were times when she was in and out without me realising to see if I was okay because I used to be sound asleep and I found for quite some time it was part and parcel of the day's regime.

Describes the care his wife gave during his recovery.

Describes the care his wife gave during his recovery.

Well one of the things was she always made sure that I got my tablets in the initial stages, breakfast in bed before she would get me up, because I did need assistance to get washed and dressed. As time went on, just getting me out. One of the things that the doctor said was get out in the car and have a ride out.

And just being, monitoring everything that I did and making sure I did what I needed to do to try and make progress and not let me just sit and forget that there was a world outside of a heart attack. But she was absolutely brilliant.


A balloon pump was used to support the heart during angioplasty.

A balloon pump was used to support the heart during angioplasty.

View topic summary
SHOW TEXT VERSION
PRINT TRANSCRIPT
And as I've mentioned I had angioplasty and most people thought I would have had a stent put in but apparently I didn't have a stent. The doctor did later say that more or less something to the effect that he wouldn't sort of do what he had to do again because obviously time had gone on and it had taken so long to do what he had to do but I had a balloon pump inserted which was there to assist the heart to work.

It didn't take over the work of the heart apparently but it did assist the heart until everything in the heart itself started to take over it's own work.

I can remember hearing just this sound which was so peculiar and all I could relate it to was the sound of the generator which a lot of caravans have to power the electrical supply to the caravan and I said, 'What the devil's a generator doing at the end of the ward?' and my wife just said, 'That's the thing that's keeping you alive.' And it was just a little unit and as time went on I didn't sort of hear it running but it just sounded like a small generator.

He was transferred within 24 hours to a regional cardiac centre because his condition was not...

He was transferred within 24 hours to a regional cardiac centre because his condition was not...

View topic summary
SHOW TEXT VERSION
PRINT TRANSCRIPT
I understand by this time, I was totally unconscious. I understand from my wife that the medical staff were waiting at the door to take me in on to the stretcher and straight up the corridor and they did indicate to her, 'Don't, we'll be running up this corridor,' because that particular hospital had a very long incline passageway to the cardiac unit and said, 'don't run, we'll have to run.'

Apparently they had all of the equipment on there. Took me up to the ward and I knew nothing of this, this was what was related to me by my wife. The first thing I recall was the following morning, roughly about seven to half past, I couldn't say exactly.

I came round and I remember saying to my wife, 'You know I feel a wee bit better,' and at that time I was in a cubicle near to the nurses station and then my wife and my daughter appeared because my wife had stayed all night and then thought now we've got to get [my] daughter.

So she came down and they came in again and was standing just outside of the curtain and then they allowed them to come in again to see me because the doctors were there and they had come in to see me and just at that time when they came in, I said, 'I'm going to be sick.'

And I did, I vomited and immediately, as it happened the doctors were still there, virtually at the end of the bed, and they ushered my wife and my daughter out and then I lost conscious again.

And of course off I went and between leaving the hospital and the [specialist] hospital, from time to time I came around a little bit. I can remember the driver making certain remarks about people being in his way [laughs] and then in to hospital. And as I say, I sort of lost consciousness from time to time, well most of the time actually on the journey.

He gets breathless sometimes, but can do most of what he did before, though more slowly.

He gets breathless sometimes, but can do most of what he did before, though more slowly.

View topic summary
SHOW TEXT VERSION
PRINT TRANSCRIPT
I attempt everything that I used to do. I even do the decorating, just at a slower pace. But everything, I do the garden, whereas what I might have done in half a day probably takes a day and a half to two days to do, by way of digging. I don't think there's anything really that I've had to stop doing. Swimming, I used to enjoy swimming but I don't do as much of that as I used to do.

The biggest problem I have from time to time is getting somewhat breathless and I just have to sit down and take it easy. And occasionally I increase one of the tablets, which is by arrangement with the doctor. If I do have a problem with being breathless, increase the one of the tablets for a day or so and then it settles down.

But that's the main problem that I have now, from time to time and sometimes without sort of too much effort the breathlessness occurs. But generally I feel and a number of people, quite a number of people say 'Well you're looking alright,' and I think, yes I feel alright today but there are days when I'm not one hundred per cent but in general terms, I feel reasonably well.

And just get along with life. As I said, we take our holidays, we go caravanning. I know when I've done enough. What I do, shall I say, I do at a slower pace than what I might otherwise have been doing it at.

Be positive during your recovery.

Be positive during your recovery.

View topic summary
SHOW TEXT VERSION
PRINT TRANSCRIPT
Well I think that as I pointed out, I always had a positive attitude towards getting better and I do feel that people should try to recognise that a heart attack is quite a serious ailment. That people can get over it and one of the main things is to try to have the positive attitude of doing what they've always done, albeit at possibly a slower pace, but try to do something but not to sit back and say, 'I've had a heart attack. I can't do this, I can't do that.'

As I pointed out at the beginning that was never my attitude and I think that there are people that possibly find they are more disabled that I was and may find they have to work harder at recovery than possibly I had to do. And I would say to their carer's to give them support, because that was what was the mainstay of me recovering was the support that I was given.