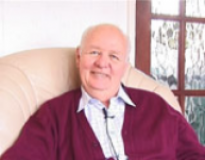 He had black moods after his triple bypass surgery.

He had black moods after his triple bypass surgery.

View topic summary
SHOW TEXT VERSION
PRINT TRANSCRIPT
Yes, I would say, straight from the outset, I'm very, very glad that we had such, and still have such a strong marriage because the black moods, the despair and very much out of character after the triple bypass initially had me breaking down and crying for no apparent reason.

I could have been talking much as I am now, to either my wife or a friend or a colleague, and I would start to cry and to this day I couldn't tell anybody why. I then got quite black moods, a case of 'Why me?', 'Why is it happening to me?' 'What have I done, what have I done to deserve it?'

All the usual sayings and I think because it's the nearest and dearest, the only person that's with you at that time, you take out of them some of your own anguish, some of your own anger and poor dear, she suffered it for long enough and then she put her foot down in no uncertain terms and said, 'I am not having it, you will change or I will change you.' [laughs] And it brought me up short.

I thought, 'Why the devil should I be taking all my inner anguish, all my anger at what's happened to me on the person who cares most.' She was right, I can't say anymore, she was exactly right. She didn't deserve the manner in which I was talking and carrying on. Had we not been so happy and strong initially, and since, it could well have caused great problems, much more than it did, much more than it did.

Being able to talk to others in a similar situation really helps.

Being able to talk to others in a similar situation really helps.

Actually understanding that you're not alone, that the feelings that you're having, the aches that you get, the slight flutters of this and the effects of that drug, you're not the only person in the world that's got them.

The mere fact that you can go and speak with, in our case, a hundred odd people, and you're 'Oh yes, I've done that' 'Oh yes, that's exactly what happened to me' or 'Have you had this or does this happen?'

The mere fact that it's a shared experience helps, it really does help and we are quite well supported by very, very caring professionals as well.

He found it hard to accept early medical retirement for a long time and to find a purpose to his...

He found it hard to accept early medical retirement for a long time and to find a purpose to his...

View topic summary
SHOW TEXT VERSION
PRINT TRANSCRIPT
Yes I suppose having been the breadwinner. I'm from a generation that I never wanted my wife to go out to work. Maybe we were fortunate that we were in such a position that she didn't have to.

And following my initial heart attack, and certainly following my enforced medical retirement some thirteen years ago, I found it difficult, very difficult to come to terms with that and were my wife present, she would tell you that I made life quite difficult for her at that period. Partly related to the job that I had, I was used to being in a position of authority and I found it quite difficult to find a reason for being.

With the help of my wife and taking up various other options, such as, learning to play a card game, going back to college, my computer studies, we managed quite well.

Describes his financial worries when he had to retire early at the age of 50.

Describes his financial worries when he had to retire early at the age of 50.

View topic summary
SHOW TEXT VERSION
PRINT TRANSCRIPT
We are both well aware that it was a time that we wouldn't wish to revisit at all and it was through her guidance if you like that we took up alternative things to keep us busy. That was a great problem finally, having your life taken away from you.

Is that what it felt like at the time?

And it still does, even looking back, even though we have a reasonable standard of living, I'm not for one minute crying the 'poor tale', compared to what could have been it still causes you to think. Immediately I had to take medical retirement, my income dropped by 60 some percent.

Now at that early age, still in early age at 50, which is when I had to retire, as with most people your financial plans are all built around your retirement date when everything comes to fruition.

Up until then you may be carrying mortgages, you may be carrying car loans, all sorts of financial commitments. Obviously at that stage, our kids have not quite flown the coop. I couldn't persuade them to leave, I couldn't understand it [laughs] and so it is of great worry, great concern that 'how the hell am I going to keep my family,' because like I've said, through choice I was the breadwinner.

I didn't want my wife working, I wanted her at home. She did get a part time job, which she quite enjoyed and she'd actually to give that up if you like, to look after me. So roles were very much reversed for a while and I found it difficult to cope with. So yes, it felt very much like someone had taken your reason for being away from you and it did take some while to find other reasons to keep, to keep going.

I didn't reach what you would term I suppose as clinical depression, or it didn't get that serious that I was considering ending it all, not by any means. I had still had a lot to live for, as my wife kept pointing out and we've still got a lot going for us and yes, but we lost a lot and I felt we lost a lot. We are both well aware that it was a time that we wouldn't wish to revisit at all and it.


Admits that it can be difficult for doctors to find the right amount of information to give.

Admits that it can be difficult for doctors to find the right amount of information to give.

View topic summary
SHOW TEXT VERSION
PRINT TRANSCRIPT
It must be a very difficult job for either surgeon or nursing staff to find the right level to pitch the information at, because everybody's different. In the  'cath' labs where they actually do all these insertions, do all the fancy work with the electrician [laughs], it, I was fascinated to watch it all on the screen and yet there were people who were in the same ward as I was, it was a little four-bedded ward, who asked for their eyes covering because they didn't want to know.

That must make life very difficult, very difficult. In fact I have suggested to some of the professionals who are on the support group with us, I was wondering if it was possible to form some, almost like a score sheet. Say six levels of information and either the doctor or the nurse or whoever, will tick one of those boxes to say which level of information it would be better to supply to this particular patient. Whether that's possible I don't know yet.

But initially the amount of information that the surgeon was able to give or did give was quite limited. I found out since and I've learnt since, that was because they don't know what level of information you are comfortable with.

He continued to smoke and didn't reduce his workload until he had a second heart attack.

He continued to smoke and didn't reduce his workload until he had a second heart attack.

View topic summary
SHOW TEXT VERSION
PRINT TRANSCRIPT
I still hadn't got over the, if you like, I know I was 40 but as a younger man, as with most younger people, you consider yourself immortal, you're not ever going to die, nothing can hurt you.

I suppose there was still an element of that in my behaviour. In fact you tend, I tended to go the other way, that 'don't be silly, I can't have had a heart attack, I'm going to prove them wrong.'

Hence you carry on smoking, hence you don't reduce your workload and you, you tend effectively to continue, once you get over the initial trauma, you tend to continue your lifestyle exactly as it was.

I found the second attack much more of a pull up, I did take heed of that one. And the fact that I had a really good GP as well, who calls a spade a spade, he doesn't go around corners, who said, 'you have two choices,' he said, 'you can go back to work and you can die or you can seek medical retirement and hopefully continue a good standard of life.'

So I took notice of him as well. I found it very depressing realising that I was not immortal, but as I say we fought through that and came out of the other end, which was wonderful.