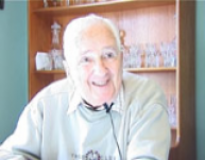 He has become short-tempered, which he thinks might be a side effect of the ace inhibitor and...

He has become short-tempered, which he thinks might be a side effect of the ace inhibitor and...

But when it happens to yourself, I think you see the worst side of everything.

Can you explain that a little bit more?

Well, you know you see the bad side of the thing, you've had a heart attack, how bad has it been, what's the damage, are you going to have another one. If I do this I may have one. I mustn't do this, I mustn't do that. In a way it made life a bit hard for my wife.

I realised that fully and the treatment I'm on, these various tablets, they do make you a little bit short-tempered, I'm to understand. And I snap at her sometimes when I shouldn't. But that may be one of the side effects of it.

He no longer drove long distances after his heart attack.

He no longer drove long distances after his heart attack.

View topic summary
SHOW TEXT VERSION
PRINT TRANSCRIPT
It's had that impact on me that I have to stop and think, maybe it's a good thing. Because when I was working I thought nothing of getting up at six o'clock in the morning and driving down to the end of North Wales and back that evening, and down again the next day, you know. And all that had to stop and did stop.

And you were doing that right up until..

Right up until I was seventy till I gave up I was driving around. I was only working part time for a company which was nearly full time.

I don't think there is a part time thing as such in the field I was in anyway, because you were, you might have to go to [town] today, and go down to [town] tomorrow, or to [town] or somewhere and I was continually on the road, and which for a heart person it isn't a good thing. Not with the amount of traffic that's on the roads now and the danger of an accident, or the danger of a heart attack and causing another accident. You have to take all these things in to consideration.

That has impacted on me. If I'm going to Ireland now, which I do three or four times a year, we generally tend to travel on a Sunday when there isn't much traffic. Or we'll travel, if for instance we were going to go tomorrow morning, we'd go to [town] this evening and spent the night there and travel tomorrow, break the journey. Not to overdo anything if we can avoid it.

Rehabilitation gave him great confidence - he was a different person at the end of it.

Rehabilitation gave him great confidence - he was a different person at the end of it.

View topic summary
SHOW TEXT VERSION
PRINT TRANSCRIPT
Now I was very worried at this stage. I didn't want to show to my wife or my children, what was going to happen from here on. Was I going to be an invalid or a semi-invalid? Was I going to be a nervous wreck afraid to go here, go there, do anything?

And about the third or fourth day this nurse came along to me, who was in charge of cardiac rehab. And she explained to me what to do and she said 'does your wife,' I said can my wife come' 'Certainly' she said and she made an appointment for the Friday morning to come in and meet the wife and I together.

There was also a girl from the British Heart Foundation with her that morning and we discussed the whole thing. I said 'yes I certainly would do it,' because I didn't know what I could do or what I couldn't do and afraid to do anything. And it being the beginning of December, the rehab course wouldn't start until January. Of course I wasn't allowed to drive or anything. My own doctor wouldn't allow me anyway, even when the month was up he made me do an extra couple of weeks.

So I just sat at home here very carefully, very dodgy. Not doing anything really and then the rehab started after Christmas. From the first day I went to that, it was twice a week for four weeks, I was a different person at the end of it. They showed me what I could do. I was being monitored, I was doing exercises that I wouldn't have attempted to do and it did give me great confidence. That really prepared me for the complete rehabilitation period.

He was worried about picking his grandchildren up in case he fell.

He was worried about picking his grandchildren up in case he fell.

View topic summary
SHOW TEXT VERSION
PRINT TRANSCRIPT
You see the thing is that the children, the grandchildren are used to coming sitting on my lap and things like that and they were told not to. You know, granddaddy's not well. Granddad's an ill man type of thing. One day, my granddaughter she's only nine now. She was only about two or three at the time.

Describes his experience of getting medical insurance for his holiday in Canada.

Describes his experience of getting medical insurance for his holiday in Canada.

View topic summary
SHOW TEXT VERSION
PRINT TRANSCRIPT
We still go on trips. We were in Canada this year for a month. We've been there two or three times since. The only thing is the medical insurance that affects that, although it's not bad. You see I've had no repercussions really since I had that heart attack and I'm on the medication. They take that in to consideration. I get through.

Did you find that the insurance company, did you have to find a special company?

We had to find a special company. You know the first company when I talked about going first to Canada, which was '99, I think we went. They were looking for two hundred pound, two hundred and sixty pound off me to cover me, you know.

And I spoke to the cardiologist and he said 'tell them to write to me', he said and 'I'll deal with it', which I never had to do because the agent that I eventually booked with got in touch with a company, gave me the phone number, ring, tell them, they said 'Okay, you're covered.' And it was for a very nominal sum. As little as forty odd pound, you know.

So there are ways round.

Oh there are ways round it, yes. And I've gone with them a couple of times since and there's never been any problem with them.