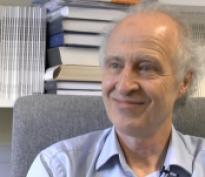 Professor Derick Wade of the Oxford Centre for Enablement talks about the meaning of the words “coma” and the “vegetative state”.

Professor Derick Wade of the Oxford Centre for Enablement talks about the meaning of the words “coma” and the “vegetative state”.

View topic summary
SHOW TEXT VERSION
EMBED CODE
PRINT TRANSCRIPT
Coma is really the word that’s used to refer to someone being unresponsive, unconscious – a plain English term just meaning they’re not responding at all. We assume that they’re unaware of anything that’s happened. They will not talk. They will not move. They will not do anything at all. They may need ventilation support or they may not. But they’re unresponsive. And they will remain in that state, with their eyes closed, throughout. So one of the things that defines coma is that your eyes are closed. At some point, usually within a week, two weeks, if they remain in that state, they will start to open their eyes. They will start to be slightly more reactive and responsive. And at some point they will move into a state where they are termed often “vegetative”. All that means, really, is that having lost the sleep-wake cycle- For the first week, two weeks, they don’t wake up and go to sleep with their eyes opening and closing, they just stay the same, they start to have a time when they appear more awake and a time when they appear more asleep. Their eyes will be open. Their eyes might be moving around. They might be twitching or moving a little bit. And in that case you might refer to that – or people do refer to that – as the vegetative state. And it really just means that the functions of the body of pulse, blood pressure, breathing, digesting, which are known as ‘vegetative’ functions, are working and are going along in the normal way. But they are still not with us, they’re still not aware, they’re still not responding in a meaningful way to what’s happening around them. So it’s slightly artificial because from the point of view of the outside person they’re still unaware, they’re still essentially not responding. But in a descriptive sense we call them vegetative.

How can you be sure that someone is not conscious? Derick Wade describes how he assesses whether or not a patient is conscious.

How can you be sure that someone is not conscious? Derick Wade describes how he assesses whether or not a patient is conscious.

View topic summary
SHOW TEXT VERSION
EMBED CODE
PRINT TRANSCRIPT
How can you be sure that a patient is vegetative and has no awareness of themselves or the outside world?

Right, well in terms of being sure that someone is unaware of themselves, in the end that’s a human clinical judgment. So there is no electrical test or scanning test that will tell you definitively that this person is aware or not aware. So the way that I do it and most people do it is to look at somebody’s behavior – in other words the way they move, the way their face moves, their hands move, their arms move, whatever it might be, and to say, “Does that behavior require the person to be aware, or is that entirely a reflex?”. So has that person extracted some meaning from what is happening? So if the bell goes, if a telephone bell goes and somebody reaches out as if to pick up a telephone and as if to put it to their ear, they’ve obviously understood that it’s a bell, which means telephone, and they obviously know that a telephone is something that you pick up with your hand. If the bell goes and they just jump, they’ve heard the noise, but they don’t take any meaning from it. They’d do the same if I clapped my hands, rang a bell, opened the window, probably, with a loud bang. So they’ve got to get some meaning out of it. And in terms of their movements, if they’re doing something that implies they have an abstract goal. So if I pinch somebody on their hand to see how they respond to pain, and they withdraw their hand, that’s a reflex. If I pinch anybody, if I pinch you, you would withdraw your hand – among other things. If I pinch someone who’s conscious they will also try to take my hand away, hit me, they’ll do a whole lot of other things. Which imply that they’ve worked out that somebody is doing something and they want to stop it. So if somebody was apparently in a coma, or apparently in the vegetative state, and I pinched their hand on the left, and the right hand comes across, catches hold of my hand, and pulls it away, clearly that means they’re aware. They were aware that somebody, me, was causing them pain and they thought how can they remove it. So in the end, saying somebody is vegetative means that you have determined that nothing that they do requires them to have formulated a goal, formulated an idea, or understood the meaning of what is happening around them. And that does come down to commonsense, in a way. You have to decide that. Because people in the vegetative state will respond to noise - by startle or jump, will respond to pain – by moving away, often will have some spontaneous movement, their eyes will move all over the place, they might yawn, sometimes they might stretch or they might move their arms. Rarely do they do a lot of movement – I have seen them, but that’s rare. But they’re not immobile or unresponsive. It’s the nature of the response that determines reflex against awareness.

Can a vegetative patient feel pain?

Can a vegetative patient feel pain?

View topic summary
SHOW TEXT VERSION
EMBED CODE
PRINT TRANSCRIPT
The question of whether someone in the vegetative state can feel pain is interesting and difficult to answer. I personally believe that they are not aware of pain. If you could ask them I don’t think that they would say that they feel pain. And of course we talk about it – we say they feel pain and withdraw. What I should be saying is, there’s a painful stimulus, which reaches the central nervous system – probably the spinal cord – up a nerve that normally carries pain, that causes a reflex movement in the spinal cord to move the hand away. I’m implying, when I say they’re not aware, that it is not getting up to the brain, to a part of the brain that says “I (whoever I am) am feeling pain”. So they don’t feel it. But they respond to it.

View topic summary
SHOW TEXT VERSION
EMBED CODE
PRINT TRANSCRIPT
The locked-in syndrome, which people worry about quite frequently, is very, very different. And once you’ve seen somebody in the locked-in syndrome you realize that actually the two will never be confused. Because the person is clearly responding all the time, very quickly, to what you do. They can virtually always have eye movements which they can control well. So if you say, “look right” they will immediately look right. Not after a delay, but immediately. If you say “blink your eyes” they will blink their eyes immediately. If you say “blink twice”, they will blink twice. Immediately. Also – and it’s rather less easy to explain but, they look as if they’re aware. Sometimes they will have minor facial movements and then you can see the beginnings of a smile, for example, if there’s a joke. As time goes on people who are locked in often have other movements which make it obvious. But if it is just the eyes that move the responses are really really quick. And you could even set up, you know, a mathematical puzzle and ask the person to give you the answer to a question by the number of blinks that they do and they will do it. So it’s a very different situation. They are completely aware. They can control their eyes –they can’t move much else – but you can see that they’re aware.
Previous Page
Next Page