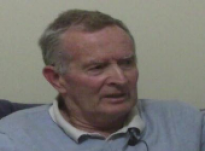 Age at interview: 67
Age at diagnosis: 35
Brief Outline: Ralph first experienced depression in his mid-30s. Although he was diagnosed fairly soon after first experiencing symptoms, he chose not to pursue medical treatment and instead spent many years experimenting with alternative therapies. Gradually he came to realise that eating plain, unprocessed food made him feel better, and now thinks that MSG and other food additives are the cause of his depression. By following a strict diet, he has been able to make a full recovery.
Background: Ralph is a married father of two children. He works as an aerospace engineer and in his spare time enjoys playing sport, especially tennis. Ethnic background' Australian.

In his mid-30s Ralph began to ‘feel miserable’, tense and short-tempered. He also experienced insomnia and panic attacks, which he described as making him feel as though he was about to die. Finding it difficult to concentrate and get through the day at work, Ralph went to the doctor. The doctor diagnosed depression and suggested shock therapy as a possible treatment option, which Ralph found disconcerting. He was also given a referral to a psychiatrist that he never followed up. Instead Ralph persevered with work, but as he was still struggling, he spoke to his boss about his concerns about his performance. His boss understood as he too was experiencing depression, and suggested that Ralph relocate to the US within the company and see if that had any positive effect.
In America, Ralph found that his symptoms grew worse. Struggling to get through the work day, he found himself returning from work, telling the kids to be quiet and falling asleep on the couch. He had no interest in anything, withdrew from social activities, and remembers being overwhelmed by the idea of going on a holiday.
Ralph again consulted a doctor in America, underwent some tests and was advised that he was a bit overweight with slightly elevated blood pressure. Not wanting to embark on a lifetime of medication, Ralph decided to experiment with his diet. He chose a diet that excluded fats, sugar, and salt and ate mainly plain, unprocessed food. Within a couple of months he found that his condition had dramatically improved and he was ‘jumping out of his skin’. On returning to Australia, still not really making the connection with food, he abandoned his diet and his symptoms returned.
Experiencing bouts of crying, numbness in various parts of his body, migraines, dizziness, anxiety and panic attacks, Ralph began to experiment with various alternative therapies such as naturopathy, acupuncture and hypnotherapy. He was resistant to psychotherapy, at the time associating it with ‘madness’ and assuming that a psychiatrist would want to look into his past, when he was confident that his upbringing was unrelated to what he was experiencing. Ralph saw many different doctors and alternative therapists but didn’t find anyone who could help him. One doctor did prescribe antidepressants but Ralph only took a couple before ‘flushing the rest of the packet down the toilet’.
While this journey was by no means straightforward, through trial and error he discovered that by eating natural foods without too many additives he was able to manage his mood. He now believes that he has achieved full recovery. Ralph believes his experience highlights the role of diet in depression and he has become involved in a depression-focused NGO in order to help others.

Many physical symptoms were part of Ralphs depression experience, along with an inability to do...

Many physical symptoms were part of Ralphs depression experience, along with an inability to do...

View topic summary
SHOW TEXT VERSION
PRINT TRANSCRIPT
A bad day would be just miserable, going to bed crying for no reason at all, with the light on, because I didn't want the light off. Not wanting to go out, not wanting to have friends around. Not going to play tennis. In fact even at one stage I couldn't, couldn’t bring myself around to plan a holiday. It just, just felt too daunting to have a holiday. This is in America, but – , due to come up to summer vacation and I wanted to go on holidays, but – or sorry the family did – and I thought it’d be - because that was what we were there for, besides work - but I thought I don't know how am I going to this, I don’t know how I’m going to do it - don't know. Strange country, driving, other side of the road, new places, I can't do it.
Well there's depression of course and there's anxiety; panic attacks. There's the crying spells. There was the tingling in the hands or the arms. Numbness in my back; numbness in my back; numbness in the legs; difficulty in walking - feeling that my gait's not quite right; not sleeping of course; feeling angry; uncoordinated sometimes.

Ralph talked about his first experience with depression 35 years ago and reactions he received...

Ralph talked about his first experience with depression 35 years ago and reactions he received...

View topic summary
SHOW TEXT VERSION
PRINT TRANSCRIPT
People would say, of course, they'd tell you to snap out of it, which is ridiculous, you can't. And no-one with depression wants to hear that. Nor do they want to hear, ‘Well you know, you've got a good life, and you know, nice house, why do you feel like this? You shouldn't feel like that’. That's ridiculous too, because people in, in all sorts of situations will get
depression.
The support with my wife was good and the kids didn't know of course, [runs hand through hair] they knew there was a change in me, that I was acting strange, but. A lot of friends sort of moved away a bit, those that knew when I decided to withdraw away, because I wasn't feeling well, they didn't ah sort of come around helping or looking to give assistance. Well I suppose - which is understandable back 35 years ago - it's probably understandable now. That they think someone's a bit silly or strange or having odd spells, they don't want to get involved. I – and I suppose if I hadn't been through this, I’d, I would probably feel the same. Because you don't, you don’t understand what's going on, unless you've had it, I think.

Ralph tried many conventional and alternative approaches to his depression, but in the end...

Ralph tried many conventional and alternative approaches to his depression, but in the end...

View topic summary
SHOW TEXT VERSION
PRINT TRANSCRIPT
I came home from the doctors thinking, ‘Well what can I do? I’ve, I don't want to take drugs; I don't think I need drugs’. Mind you, I felt extremely bad, I felt terrible. Occasional panic attacks and depression and various other little symptoms I had which I didn't relate to whatever, to what I had. I then decided that, ‘I suppose I've got to get my weight down and my blood pressure down’. So I decided to go on a diet. I selected a diet myself and basically it was no fats, no sugar, no salt, eat very plain food and, and minimal amounts, just to keep my, get my weight down and to get my blood pressure down’. And to cut a long story short, within two months, I was jumping out of my skin.
The only way that - I tried all sorts of doctors, not psychiatrists, although I did see one without knowing it; naturopaths; what’s the other - acupuncturists; people who slap dead fish over you in the middle of the night, probably - not really, but you know that sort of thing; hypnotherapy. I haven't tried religion - that won't work anyway; oh, all those sorts of things. Ah, and different sorts of diets.
Until recently I read a publication – I say – during all this time, I've been up and down, all over the place and generally not as bad as I used to be, but certainly not good enough to push myself anywhere. Ah, then eventually I did some reading on the subject and a lot of people were talking about MSG. And I've just realised that when I was on these diets, I wasn’t, I was eating plain food. I wasn't eating anything out of a packet, anything out of a bottle and I - even going to a restaurant - I didn't go to restaurants, fast food places, anything like that.
Ah, and that's what seemed to make me feel better. To this day, I now follow that diet, pretty much, but there's, there’s more to it than just MSG. There is other, probably other foods that I react to, not seriously, but enough that when I have MSG too, then I start - if you have it day after day, which I was doing, without knowing it, ah it was causing me to do all sorts of strange things
I know that when I stopped – I was, went on this diet, the, I mean the result wasn't immediate, it took about two months before I was 100 per cent. But mind you, after two weeks, I was feeling ah, on a scale of one to ten, I was probably feeling eight out of 10. But eight out of 10 wasn't good enough, I had to be 10. And I got there eventually. And it was quite ah miraculous, because I remember that day that ah, or that night, when I woke up in the morning, I said, ‘I've just slept through the whole night’. And I said – and it repeated day after – or night - not day after day - night after night after night. And at work I was performing brilliantly.
Previous Page
Next Page