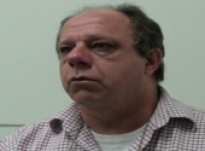 Age at interview: 49
Age at diagnosis: 36
Brief Outline: Peter first experienced depression in 1997 while working as an investment banker. He experienced nausea, a pervasive sense of 'impending doom', sleeping problems, and by 1998 was no longer able to work. In 2002 his mental health declined further after an accident resulting in chronic physical pain. However in time Peter learned to deal with his depression better, and found an effective medication. He says his experience has made him more compassionate and accepting.
Background: Peter is a retired investment banker currently studying at university. He is married with three teenage children, and enjoys visiting the beach and spending time with his family. Ethnic background' Anglo Australian.

Peter’s early life was life was happy and stable. He grew up in a family of five boys, completed university, married and had three children, and established a career in investment banking. However, in 1997 Peter began to notice feelings of nausea and dread on the way to work in the morning. Gradually these feelings began to persist throughout the day, and his job no longer brought the satisfaction it had previously. He was also having trouble sleeping – routinely waking at 4am and not being able to get back to sleep. Peter was puzzled by this, as nothing had otherwise changed in his life. Then one day at work he found himself ‘paralysed’ – unable to read what was on his computer screen, and unable to face his next meeting.
Peter was referred by his employer to a psychologist, and then he saw a psychiatrist. The psychiatrist prescribed antidepressants although did not explicitly make a diagnosis. Peter took two months off work, but the medication made little difference. He then started to worry about money and bills, so made himself return to work. Throughout this period he was feeling no better and had begun to have suicidal thoughts. One day on the way to a meeting, he again came to a standstill. He called his wife and asked her to pick him up.
The next four years were a ‘blur of days at a time spent in bed’, continually being irritable and low, struggling to read even simple things, and experimenting with different antidepressants. Around this time Peter was first exposed to the ideas of Buddhism which planted the idea that depression need not define him. However, he had another setback in 2002 when he jumped 10 feet from his mother’s roof after clearing her gutters – which he explains was not a suicide attempt, ‘just an act of stupidity’. He smashed his left heel, causing permanent damage and resulting in him spending years on pain relief medication.
By 2005 or 2006, Peter had learned to think of himself and his depression as distinct entities, which he found helpful. In 2008 he tried duloxetine and experienced improvement in his emotional and mental state. He describes his current state of mind as a ‘mix of contentment and vigilance’, and says that he is able to compartmentalise his ‘depressed feelings’. He is well enough to be able to study, participate in family life, socialise a little, and generally keep busy. Peter is deeply grateful to his wife for staying with him and supporting him and his children over the past 13 years, and also to his brothers with whom he is able to talk openly. He now accepts his depression experience and the influence it will probably have on the rest of his life, but believes that it has made him a more compassionate and understanding person.

Peter remembered a period of increased anxiety that eventually led to depression.

And I used to drive from the [place name] over to the city every morning and I started to notice that as I was driving into the city and coming over the hill and taking the hill down to the bridge that I’d saw the city and I'd start to get sick, start to feel sick and , and nauseous. And, and well wondering what was going on and feelings of impending doom. And I'd get into work and it, it would be fine and I'd finish work and off to home and then - and it happened again and again. But the, you know, I'd feel nauseous and sick at the thought of going in there and  that feeling would extend further and further during the day.

And this went on for a little while and suddenly the, the things that I was finding that were fulfilling in my job started to – not be fulfilling. You know, and I'd go home, my sleep patterns would start to be disrupted. And I, I used to call it, you know, the night of the you know, the, the long night sort of thing and the - four o'clock in the morning on the dot it would be. And it was impending doom and there was nothing physically wrong with my environment. There was nothing that, that would engender that sort of feeling from an outside perspective and I suppose you try and ignore it for as long as you can.
And this went on and on and my sleep became disrupted and, and the nausea was happening on a daily basis and - and at the same time and, which was strange. And then one day I was sitting in front of my computer and all of a sudden I couldn't read it. And I couldn't read anything and I was supposed to be going into a meeting and I couldn't do that and  I just couldn't do anything. And so I went home and took a couple of days off.
And I was feeling anxious and sad and sick all the time. That pit of the, gut wrenching, pit of the stomach type feeling. And I know that I kept on saying to my doctor, it's like the feeling when I found out my, that my father had died, a couple of years before, that initial gut wrench that, that happened. That, you know, only lasted for, you know, a minute or two then, but now it was all the time. And I, you know, lost interest in food and just smoked cigarettes and laid down really. And because I wasn't doing anything else my sleep was getting worse and you know, the four o'clock would come and you were wide awake and that's just went on for quite a while.

Peter found books on Buddhism had more integrity than many other self-help books.

And in the meantime you know, I was trying to read as much as I could, you know, picking it up and my wife was bringing me fairly easy things to read. You know, this was over the course of a couple of years. Sometimes I could and sometimes I couldn't. But I started reading some books by the Dalai Lama and other - I'm loathe to say self-help books. I mean they, they really were commonsense books that were, you know, by people like the Dalai Lama and people that, that had some sort of integrity, not just this fluffy dolphin thing.

When Peter had to stop working, his wife took on the main breadwinning role which reduced the...

Show in context
SHOW TEXT VERSION
PRINT TRANSCRIPT
I would stay uh and stay for days at a time in bed and [raises eyebrows] I was a cranky son of a gun. And the kids wanted to know why it wasn’t happening and you know, and I couldn't do anything about it. And you know, my wife stood in, took in, stood up and, and took care of the situation and I'm sure that she was pretty fearful of the situation. But by that stage the superannuation income protection had run out and she was wondering what's going on and how were we going to live and how we were going to pay the mortgage? And I couldn't do anything - I, you know, [shrugs] I couldn't even dial the telephone.
And for this I am eternally indebted to my wife - she's such a strong woman, you know? And, and she had three kiddies that, you know, and I was, you know, I did what I could but, you know, between being cranky and depressed and – it must have been horrible for her.
Look, I'd, as uh - well first of all you know, understanding from my wife. I mean I, I think, you know, she could have gone, ‘You're all too hard, I'm out of here’. And [shakes head] and I wouldn't have blamed her because I probably was a real arsehole, when I was really sick, you know? And if I wasn't an arsehole I didn't want to go anywhere or do anything, or anything like that. So you know, that was, that was very important.

Peter found accepting that he was unable to work due to his depression very difficult. He valued the financial security his employer provided when he realised he needed to take significant leave.

Show in context
SHOW TEXT VERSION
PRINT TRANSCRIPT
And it wasn't until the company rang and spoke to my wife and said, ‘Well, you know, what's happening with him? And you know, is he coming back to work or not?’ And she said, ‘I don't know, but I really don't know what to do, you know, we've got no money,’ and stuff like that. And thank god this guy said, ‘Well he's got income protection,’ and she said, ‘No that's gone, that's superannuation’. ‘No, no, no,’ - because this company that I was working for also had an insurance portfolio. So, they knew that I had it and so he was nice enough to organise a claim for it and because I, you know, I was useless, absolutely totally useless. And it was still finding it hard to read something and make sense of it. You know, it was all of a sudden I'd had overnight dyslexia. Yeah, so thank god for that, so.
That was hard. That was a difficult transition. Because you know, it's that, because you know, when I was saying I'm trying to distance myself from the depression and my true self - which sounds again all fluffy dolphin, but it's the best way I can put it. I identified with my job - I was my job, I was, you know, that person. So that was a hard transition – to overcome the fact that I'm not the father, breadwinner, lord and master of my household - if I ever was.

Peter changed his worldview and his values as a part of his depression experience.

Show in context
SHOW TEXT VERSION
PRINT TRANSCRIPT
How different am I? Well look I was a card-carrying Liberal member when I left the money market and now I'm a Marxist. So yes, oh well I hope that I've become a lot more compassionate, a lot less arrogant. And you know, despite and despite these feelings - and it's a weird thing that you can go, well I've got, I've got this feeling of impending doom and sadness - which I have now. Like I've got it, I can feel that now - but I've compartmentalised it. And I go, well that's interesting.
So, yeah, I really hope that that it has made me a better person, you know, it's a strange thing to say. And I don't, I don't recommend it as a method [smiles]. But yeah, you know, I'm happy with who I am…
Previous Page
Next Page