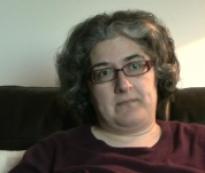 Age at interview: 46
Brief Outline: Dina first experienced symptoms of clinical depression as a postgraduate student in 1991 and was prescribed an antidepressant. She took the antidepressant medication for about a year. For a number of years Dina felt relatively well but in 2008 she experienced a severe depressive episode and felt suicidal. She was eventually admitted to hospital under a ‘section’ because of concerns about risks to her safety. In hospital she took a combination of antidepressants and antipsychotics but her depression persisted. More recently she was she was prescribed lithium, a mood stabiliser. She noticed a dramatic change in her moods, her motivation and her ability to cope with life.
Background: Dina is single and works as a researcher in mental health. Ethnic background: White European/Greek

Dina first experienced symptoms of clinical depression when she was a postgraduate student. She explained that it started with an inability to sleep, lack of concentration and feelings of tiredness. She saw her GP who prescribed sleeping tablets to help with the insomnia, but she later realised that the sleep problems were a symptom of depression. After a time she began to experience panic attacks and was feeling generally very unwell and unable to manage day-to-day. She decided to go back home [another EU country]. There she was prescribed tricyclic antidepressant as well as what she described as a ‘cocktail’ of other medicines although she cannot remember exactly what they were. She explained that by this time her depression had deteriorated as she hadn’t been able to recognise the signs. She also saw a private psychiatrist. The antidepressants worked to some extent and a while later she returned to the UK to finish her studies, but stopped taking the antidepressants when she felt more able to cope again. She felt that antidepressants had helped her to an extent, but that ultimately it had been having therapy that ‘saved my life’.


Having felt well for many years, Dina experienced a second and more severe episode of depression when a number of stressful life events caught up with her. She had recently been diagnosed with Crohn’s disease, as well as moving to a completely new area of the country. She had begun to feel distressed and anxious, particularly about her physical health. She became more depressed and her GP prescribed fluoxetine, but she feels it exacerbated her symptoms. She was prescribed sleeping tablets for sleep problems but nothing seemed to work. She saw a psychiatrist on a private basis. She felt that she was deteriorating and had been given various drugs including antipsychotic. At one point she was prescribed mirtazapine in conjunction with fluoxetine as it was thought this might work to combat the depression as well as help with her sleep problems, but her mood dropped to a serious degree and she was referred to the Crisis team. They tried to ensure that she took her medicines but she did not find their intervention helpful. Dina’s mental health deteriorated to a point where she was compulsorily admitted to hospital under a section. There she was given a different antidepressant (venlafaxine) and she stayed for around 3 months, but she felt that the hospital environment was often far from therapeutic.

After she was discharged from hospital Dina continued taking antidepressants and other medicines. She attended a mental health art project that she felt helped ease the social isolation she experienced through her depression. She found comfort in having a place to go where other people were in a similar situation.

Dina was advised that her depression had been ‘resistant’ to a number of antidepressants. She is now taking lithium, as well as venlafaxine and mirtazapine. When she began taking lithium she noticed a dramatic positive change in her moods, her motivation, and her ability to cope with life. Dina feels that over the time she has experienced depression she has been given a variety of different medicines, but has not always been given enough information or support and feels that doctors should take a more holistic approach rather than focusing solely on prescribing.

Eating and food were a problem for Dina and being prescribed...

Eating and food were a problem for Dina and being prescribed...

View topic summary
SHOW TEXT VERSION
EMBED CODE
PRINT TRANSCRIPT
I guess you know the weight gain again is one of the, like the mirtazapine I think out of all the antidepressants that I’ve taken it’s probably the one that has, you know, caused the most weight gain, you know. And again of course the weight gain is not just about drugs, the tablets it’s because like for example in hospital the only thing that I had any control on was food so, you know, I was eating nine bars of Twix at once which is like… my God, you know how can anyone do that. I mean before, before my episode I was 55 kilos which has doubled and of course that’s not just about the tablets it's also about, you know, using food as... well… comfort, sometimes comfort and sometimes a way to harm myself.

View topic summary
SHOW TEXT VERSION
EMBED CODE
PRINT TRANSCRIPT
It was a very, very distinct effect that lithium had when I started taking it and it was kind of quick as well.

Can you describe that effect?

You know, a lot like my mood being lifted.

You know, but on the other hand though at the same time I had spent some time at the mental health arts project, I’d started thinking that I want to go back to work, you know, it was like a combination of things.

So you mean it’s hard to pin down exactly what the mood change?

Yes but I do think because it was so dramatic that, you know, although I mean from my reading I understand that, you know, they don’t really know how lithium works or they don’t really know how any of these drugs work and why …. I think the lithium was an important factor I mean that was what my psychiatrist says and I probably believe it and he says that without being somebody who is very much kind of a ‘medical model’ person because I mean you know, he was very much psychologically minded.

With the lithium of course it’s the toxicity of it like, you know, I have to go and have blood tests every few months you know this is a very toxic drug, I mean a very good drug apparently but it’s a very toxic drug.

The lithium, yes. So you know it has to be monitored and, you know, I mean I don’t know whether I have to be on this, you know, for the rest of my life or I guess I’ll have to kind of negotiate with the psychiatrist.

Dina described some of the health professionals she has seen...

Dina described some of the health professionals she has seen...

View topic summary
SHOW TEXT VERSION
EMBED CODE
PRINT TRANSCRIPT
Yes, I have yes, I mean my GP is brilliant you know, the woman that I saw for two and a half years, the psychologist again is brilliant and the psychiatrist that I’ve had is brilliant but some others, I mean the nurses in the hospital were just useless, you know, I mean it was like, you know, I’m not anti -staff but I’ve had some poor experiences, you know, but also I’ve been lucky.

Is it to do with not feeling listened to or not joining in and being able to make decisions together?

Dina feels strongly about the way in which people’s human...

Dina feels strongly about the way in which people’s human...

View topic summary
SHOW TEXT VERSION
EMBED CODE
PRINT TRANSCRIPT
I’m not against psychiatry I mean, you know, I guess I am critical of a lot of practices of psychiatry but I’m not necessarily and I’m not necessarily against medication but I think especially, you know, especially with the sectioning if I didn’t want to take medication when I was sectioned they would have injected me because you can’t refuse so I guess there are some serious violations I think of human rights if you take it to that kind of, well yes because so there are these things with medication, you know, where people are not given a choice. And of course there’s all this stuff with community treatment orders now where, you know, people are put on community treatment orders because, okay they don’t want to take their medication but if they are under the community treatment order they are really in reality sectioned but under the community. But if, so they have to take to the clinic and have the depot and, you know, if they don’t do that they can be revoked then, you know again.

It’s very controlling, I mean it’s very and there was no as I said there’s no negotiation, of course I mean there’s the politics of it and there is the big pharma and, pushing from all this. I mean I don’t I’m not saying that, you know, sometimes I guess for some people and I guess I’m included in that apparently with the lithium medication works. So, but I guess people need to be able to be more informed, need to be able to have alternatives and given other ways as, you know, like more psychological or kind of treatments to get at… with the medication because I think if I hadn’t asked for it I wouldn’t have been offered, so you know, I think there are quite a lot of, a lot of complex kind of issues with medication. Especially when, you know when somebody’s detained and, you know, you don’t have any choice.

View topic summary
SHOW TEXT VERSION
EMBED CODE
PRINT TRANSCRIPT
I remember that whilst I was seeing the crisis team I was seeing the psychiatrist who was a very decent guy I think and, you know, a very kind of gentle person and he actually said to me that, you know, we are trying a lot of drugs because I think as I said they had changed, perhaps, certainly they had changed the fluoxetine but I don’t, and introduced mirtazapine I don't remember whether they had introduced olanzapine by that time but the message was that because my depression was, treatment ‘resistant’ in inverted commas he sort of explained to me that that was towards the end of that year that, you know, if the drugs don’t work then the next line of treatment would be either lithium or ECT.

Did you at the time know anything about those drugs, the lithium or anything?

No I didn’t I mean, you know, he said that you know, we’re not, he wasn’t saying ‘we’re giving them to you now’ but he was saying that yes it was a kind of warning, you know, that these are like, this is the last resort kind of thing.
Previous Page
Next Page