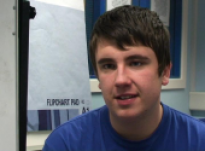 Age at interview: 18
Brief Outline: When Alex was 15, he and his Dad started sharing the odd beer together. His dad was trying to teach him to drink sensibly. He thinks that young people drink so much in the UK because alcohol is cheap, and that there is not nearly enough information about the health risks of drinking.
Background: Alex goes to college full-time and works as a barman at weekends. He plans to go to university. He lives with his parents and two stepsisters. His family only drinks alcohol occasionally. British.

The first time Alex tasted alcohol was when his father offered him a beer after dinner when he was about fifteen. From then on they would share a beer together every two weeks or so. He explained that his dad was trying to teach him to drink sensibly and not to go ‘crazy’ about it when he was out with friends. Alex describes his father as ‘drinking very little’. In his household, drinking alcohol is mainly reserved for special occasions. Even his older stepsister, who is at university, drinks very little. Alex doesn't drink very much himself because he works weekends in a bar and studies full-time so there are not that many free evenings for him to go out with his friends. He says that when he does go out, he tends to drink a lot. He recently got his driving license and his friends often rely on him to drive them back home.
Alex says that everybody ‘binge’ drinks at particular times. For him, it's at music festivals, when he tends to drink a lot. He says that alcohol helps him relax and become chattier. He feels more confident when meeting girls. He describes himself as ‘a happy drunk’. But drinking too much has also ruined his plans in the past. He remembers a particular music festival when he started drinking at 8 am and passed out by 1 pm, missing all the bands that day! He is aware that he could have been robbed that day and sees the importance of being in a group of friends who look after one another. He feels more vulnerable when he is working as a barman, particularly when drunk people become violent or start fights.
Alex thinks young people drink so much in the UK because alcohol is cheap, with special offers in supermarkets etc. He also thinks that there isn't enough information about the health risks of drinking too much alcohol. There is more information about the risks associated with smoking. His parents are his main source of information when it comes to alcohol, but says that he got most of information about drugs from school. He found it especially useful to take part in discussions and hear from people who had drug addiction problems.
Alex doesn’t have any interest in trying drugs. He has been offered drugs, particularly at music festivals by strangers, but he has refused them. None of his friends do drugs and he thinks that helps because he has never felt under pressure to try any of them.

Alex A feels happy with the information he got at college but thinks that it would be more...

Alex A feels happy with the information he got at college but thinks that it would be more...

View topic summary
SHOW TEXT VERSION
EMBED CODE
PRINT TRANSCRIPT
Where does your information come from regarding drugs, illicit drugs?
School like mostly because we do a lot about drugs and we like, people will come in and talk to us about drugs and alcohol.
Do you think that has helped?
Yeah, yeah, yeah a lot more than like my mum and dad do. They don’t help me, you get more educated about drugs at school than you do at home.
Probably, something that would work for me is like having an ex drug user tell me like, ‘This is what I used to be’. And like you see how he’s changed and what happened to him like because he’s there telling you in first-hand what happened, what he did when he was on drugs. And then you’d like think, ‘Ah look what it can do’. That would probably work better for me like if an ex drug user came in.
So personal experience.
Oh yeah, yeah.

Alex A recommends moderation as abuse and excess can result in losing everything.

Alex A recommends moderation as abuse and excess can result in losing everything.

View topic summary
SHOW TEXT VERSION
EMBED CODE
PRINT TRANSCRIPT
Like with alcohol you’ve just got to be careful. I mean nobody is saying, ‘Don’t go out and have a good time but just think like what effects it could have on you’. A lot of people judge a good night from what they can’t remember and just. Just have a drink but you know but don’t be stupid with it because it will affect you. And drugs, and there’s no way. Just stay away from any drugs because it’s not worth it in the long run to lose everything.

Alex A says that his attitude to drugs comes from his parents and from seeing the effects of drugs on others.

Alex A says that his attitude to drugs comes from his parents and from seeing the effects of drugs on others.

View topic summary
SHOW TEXT VERSION
EMBED CODE
PRINT TRANSCRIPT
What do you think has helped?
I just learnt like when you’re walking through town you can see who’s on drugs and it makes you think, ‘Is it really worth that?’ You know, like you don’t, you’ve not got a job. It’s not worth like losing everything for what, for drugs. I don’t think anyway.
What do you think has helped you to have this attitude?
It’s like I’ve not really, well my mum and dad like said, ‘Drugs are not right. Don’t go taking drugs because it’s not good for you and it will affect you’. And nobody of my mates takes drugs so I don’t. I’m not like pressured in to taking them. So it’s never really been around me.
I know of people like who went to school with us had a bit of a like, who’s had a bit of run ins with drugs like. And I just think it’s not worth, you know, getting into it because I know what it, you can see what it’s done to them like.
Like what?
Like they stop eating. They take money off their mum and dad just to buy them. Don’t look after their selves whatever like think, ‘Where will I get my drugs from next?’ kind of thing.
Ok so you have seen that?
Yeah, yeah.
Ok and that has put you off?
Yeah, yeah.
Also it seems to me that you have quite a good relationship with your parents from what you have said?
Yes. Like they’ve told me like, they’ve taught me like right and wrong of things and I do listen to them because I know what they’re, I know what they’re like. Know that they’re doing it for my benefit. So…
Would you sort of describe your parents as strict and…?
Not really strict, not, not strict at all but like now I’m 18 they’ll just say, ‘Look I can’t tell you what to do. I can just like advise you what to do.’ And I still listen to them and they weren’t strict when I was younger. They let me, they let me do stuff but I suppose at that age you are, you’re going to do what you want anyway aren’t you.
Previous Page
Next Page