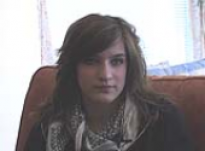 Age at interview: 16
Age at diagnosis: 5
Brief Outline: When younger her diabetes was poorly control. She was put on an insulin pump for a year and a half. But she did not like having an insulin pump because for her it was a constant reminder that she has diabetes. Doctors decided to change her insulin regimen and she was put back on two insulin injections a day. Since then her control has improved and she attributes it to maturity and to an acceptance of her diabetes. For the last three and a half years she has been using Mixtard 70/30. Doctors have suggested changing to four injections a day but she is not sure about it.
Background: She is a full-time student studying for her Highers exams. Her family includes her parents, a twin brother and two older sisters. She thought about being a primary school teacher but she isn't that sure now.

View topic summary
SHOW TEXT VERSION
EMBED CODE
PRINT TRANSCRIPT
Just, just get on with it. I mean my main view on it is that I can't let it control me. And in the past it has. It's this year in particular I've realised that I can't let it control me. I control it. That's the slogan I use. And it's just, you've just got to, you've got to be brave. You've got to deal with it. You can't, you can't block it out. It's there. And it's something you've got to have for a while. So the quicker you learn, the easier it gets. And it has got easier for me. It has got easier. It's not, it's, I mean by no means is it an easy thing to deal with. But it does get easier.

Initially she found it difficult to go back to injecting insulin after using a insulin pump. She...

Initially she found it difficult to go back to injecting insulin after using a insulin pump. She...

View topic summary
SHOW TEXT VERSION
EMBED CODE
PRINT TRANSCRIPT
So what happened about changing the pump? You described a bit of that before?

It was really difficult. Because going from something that's, well, because with the pump you just took, you just, you had a certain bolus that goes in, you know, every hour or something. And then, and then you, whenever you eat you take a certain amount of extra. You sort of press it in and take that amount extra insulin. So to go from constantly being aware to changing to two injections, where it's only two times a day that you need to be aware of it, was quite difficult. Because you, it's, I don't, to not like have it on you is difficult because, because it was on me I was always aware that I had to put it in. But to go for two injections which aren't always in my pocket or in my bag, to like, you know, it's, be teatime and my mum will say, 'Take your insulin'. I have to go all the way down to my room and change the needle and, and do all that. Which was difficult because it was, it was like she was nagging me. Like I know she wasn't at all, but it felt like, it felt like I was being nagged to take my insulin. And it shouldn't feel like that, because it should be natural. But just, it was difficult. And it probably took me about six months to get used to it and back into, you know. It was like when the pens run out, you have to change it, and I just, I didn't like, I don't like doing that. I still don't like doing that. Because it just, it just takes time. It's, but it, I suppose it's not really that, because it doesn't take too long. But it's just the fact that it's time that you have to be dealing with it. Which, I mean I probably deal with my diabetes the wrong way. I like to sort of block it out. And it does end up mounting up on me. Which I really don't mean to do. But in another sense it, it just, it's easier that way.

Could you tell me about the name of the insulin that you're using at the moment?

And you've had other types in the past?

Yes, I think I've, the mixes have been different like of, you know, the 70/30. I think the percentages have been slightly different. But, and then I've used ActRapid a lot as well. And just, I'm not too sure on the whole background of what the insulin type was. I don't really like getting into all of that a lot of the time.

Do you know how long you've been using this particular insulin?

She found the insulin pump to be a constant reminder that she has diabetes.

She found the insulin pump to be a constant reminder that she has diabetes.

View topic summary
SHOW TEXT VERSION
EMBED CODE
PRINT TRANSCRIPT
But, and then I was, and I was always on different injections. I started off on two injections and then went to three and four. And then I went on to the insulin pump. And I was, and I'd been underweight for ages, ever since having diabetes, since I was diagnosed. And then the insulin pump made me put the weight back on. Which was good. But it, I just, I didn't like it. It was too difficult to, it was a constant, for me I like to only focus on my diabetes when it's teatime or when I'm eating, when I have to take injections, when I have to, you know, double-check that my reading is okay, stuff like that. And with the pump it was a constant reminder, and people would sort of look at me and say, 'You, oh, what's that?' And I remember I got that when I was in primary set and everyone just thought it was like a toy. And I had, I moved up to secondary school and I was in assembly and it started beeping, and then it just made everyone aware of my condition. Which I'm not keen on.

But then I went back to two injections because I think the doctors realised that it was just too much for me. And things had started to level off. I started to accept the fact that, I'd matured, I'd matured, so I started to accept the fact that I had the condition, and I just, I got on with it. And things have definitely improved and I'm much more healthy than I have been. Things are really looking up. So it's good, it's good.

She finds it hard to explain how she feels when she's hyperglycaemic.

She finds it hard to explain how she feels when she's hyperglycaemic.

Yes, I've never been like admitted or anything. But I used to, I used to throw up sometimes. But that's not been for like years and years I've got that high. But I just, I can't really think, I c-, it's really hard to explain how you feel when you're high. It's like I get headaches, and I get really really thirsty, go to the toilet more regularly, and just those sort of signs that sort of kick it in. There is a feeling that, I, it's, I couldn't even start to explain how it is. It's like you feel sick but you're okay. It's like you're not ill but you feel sick. But my skin colour goes a weird sort of colour as well when it happens. I seem to go a bit greeny, sort of pale.


As a teenager, she found it difficult to ask for advice about drinking alcohol and says that she...

As a teenager, she found it difficult to ask for advice about drinking alcohol and says that she...

View topic summary
SHOW TEXT VERSION
EMBED CODE
PRINT TRANSCRIPT
And what about drinking alcohol? Do you, do you ever drink alcohol?

Yes. If I do, I have to make sure that I take my insulin. I tend to take it a bit before I have my tea. And then after I have my tea, check it before I sort of, you know, start drinking. And make sure I'm eating as well whilst I'm drinking. And then I tend to have, like if, I don't know, if I'm out then I'd have like one Coke and vodka and then the rest Diet Cokes and vodka. So that I've got the sugar there, but it's not going to be a sugar overload. But I mean I need to make sure I've taken my insulin before I start drinking. Because otherwise that's when, you know, if I take it when I come in, it's going to be late on when I come back. So it's too late. And that's when I'll have a low.

You sound really certain about that. Did anybody sort of sit you down and say to you, 'Now this is something you've got to be really''?

No, I just, I, from past experiences I've, seem to have managed. There was a phase, well, that happened quite a bit. So we, and it was because sometimes I wouldn't have, not have taken my insulin straight as I had. I had, took it at like sort of five minutes after I'd eaten. So now I take it sort of half an hour before I eat instead of twenty minutes before I eat.

I don't know, I don't really understand, I mean it's known to everyone people everywhere are drinking under, underage, and I didn't think there wasn't as much help as there could have been I don't think with it. I wasn't really told what I should be drinking, what I shouldn't be drinking. And I just sort of had to learn myself. Which I think is hard. Because, you know, with the alcopops, they're so sugary and I feel really sick when I have them. Because obviously when you drink alcohol your sugars go completely up and then they tend to sort of decrease. So I mean I found it really hard to deal with at first. But, and I don't think there was the amount of help, and I guess it was probably because I was a bit cautious about asking. But I mean I know, I mean I know the help is there if I need it, but it's just, you know, sometimes it's nice for it sort of be given, it, for it to be given to you rather than for you have to ask for it.

And what, I mean what sort of age do you think it would be sensible to start talking to young people about it?

I just think that with the way time is moving, I mean 15' is, -' is about the age that people start to drink. Usually at that age it's when people are being more rebellious about it and maybe their parents don't know. But at least by the age of 16 their parents know about it, and they're going out to meals and having a glass of wine. And I don't think the awareness of what can happen is there. Because I had to learn through trial and error. So I think that needs to be raised.