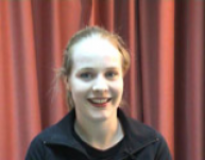 Age at interview: 20
Age at diagnosis: 19
Brief Outline: Became depressed while looking after a friend with depression. Believes Seroxat contributed to her suicide attempt. With counselling and new medication (venlafaxine 150mg/day) she is getting better.
Background: A 20 year old woman living and studying in a university town in the Midlands. While experiencing isolation and bullying in secondary school, she was able to make a close friend at university. (Played by an actor.)

Describes how she feels uncomfortable with the caring attention from her GP and so forgets things...

Describes how she feels uncomfortable with the caring attention from her GP and so forgets things...

View topic summary
SHOW TEXT VERSION
PRINT TRANSCRIPT
Well she's been ever so nice. She's been really, really kind and helpful, but I've always felt that she focused so much concern on me every time I went to see her that I got completely nervous and flustered. And my voice would just get quieter and quieter while I talked to her and anything I'd been thinking of talking to her about would just go out of my head.

It was just unnerving having that amount of attention focused on me.

After starting Seroxat (paroxetine), found she was 'sleeping too much', felt dazed, had 'head...

After starting Seroxat (paroxetine), found she was 'sleeping too much', felt dazed, had 'head...

SHOW TEXT VERSION
PRINT TRANSCRIPT
But after about a week and a half I started feeling that I was sleeping too much. I actually very quickly got to the stage where I could easily sleep twelve hours at a stretch and still not want to get up and I started feeling quite dazed all of the time that I was awake, and I still couldn't concentrate on anything, it didn't help with that at all'.I think it was it was two weeks or just over two weeks after I started Seroxat that I got some nasty physical side effects, such as what I've heard described as head shocks'. Well it would suddenly feel like the whole room just suddenly shook from side to side very, very quickly, and my eyes would unfocus and I'd have to focus them again.

And I also, during that time, had two hallucinations, which were very unpleasant; they were more or less the same'they both happened when I just glanced at someone, and both times it was one of my friends. I'd been looking at something else and I'd just look up and  just for a second as, as I turned my eyes on them, the first time, I thought I saw a skull instead of a face, and it was.... it was like I could see the skull under their face, and the face came back again. And the second time, when I looked at someone for a moment I saw them, you know, in my mind, I saw them lying with their head smashed in.

Believes Seroxat contributed to her suicide attempt. With counselling and new medication ...

Believes Seroxat contributed to her suicide attempt. With counselling and new medication ...

View topic summary
SHOW TEXT VERSION
PRINT TRANSCRIPT
Well, since I was very little I had occasionally had suicide fantasies. When I was little I used to imagine creeping out of the house at night up to the nearby railway tracks, and that was... that was in a way a comfort for me, because you know sometimes I would feel like my life was completely out of my control, and I didn't have any options.

But then I would always think I did have another option, I could take my life into my own hands and you know sometimes, sometimes I would feel ignored or unloved, and then I could imagine how people would feel if I did kill myself, and you know, it would remind me that people did love me' And for many years I hadn't had any suicide thoughts at all, and I had certainly never thought of cutting myself, but while I was on Seroxat, I did start to get sudden images in my head of you know, cutting long gashes in myself, and just... just seeing the blood running everywhere and, you know, the feeling of compulsion to do it.

You know, feeling a need to see that, and I did used to get  images coming in my head of lying in a blood- filled bath or jumping into a river or off a tall building. And those images would just sit in my head for a long time until they just melted away, and....sometimes they left me feeling a bit disturbed, but usually they didn't cause any emotions in me'.It was like.... like my personality had been withdrawn and my rational mind had been overwhelmed, or insulated or cut off in some way and I was just  purely running on immediate needs....

She saw a university-based counsellor and was relieved to be able to talk about anything she...

She saw a university-based counsellor and was relieved to be able to talk about anything she...

View topic summary
SHOW TEXT VERSION
PRINT TRANSCRIPT
I got so worried during the last term, before the exams, that I started seeing a university counsellor, and that was very helpful, but I didn't tell any of my friends about it.

Is it that you didn't tell your friends about the counsellor, or about being depressed?

You said the counselling was helpful - in what way was it helpful?

It was a big relief to have someone who I could tell anything I wanted, anything that was bothering me, and not worry about what they might think about it or how it might affect our relationship. And you know, it also helped to feel that I was doing something about my problems as well, so...

Just the friendliness, and I always looked forward to the weekly session, and it, you know, helped me sort out my thoughts and feelings, describing them to someone else.

Describes a suicide attempt where the surgeon was keen for her to tell at least one parent about...

Describes a suicide attempt where the surgeon was keen for her to tell at least one parent about...

View topic summary
HIDE TEXT
PRINT TRANSCRIPT
The surgeon had asked me if I had told anyone the truth about what had happened, and I admitted that I hadn't. And he said that he wanted me to at least tell my parents before I left hospital, and you know I was putting it off by thinking I'd rather go home and tell them at home, you know, when I could stay there with them.

But when my dad was there the surgeon came in and asked if I'd told him yet. And then of course I had to say, no I hadn't, so he went out, and my dad asked what all that was about, and so I told him that I'd had depression for a while and I'd been taking antidepressants, and that the reason I was there was that I had cut my wrists.

And you know he just looked stunned for a while, and didn't say much. Like I said, I wasn't very close to him at the time. So he... he then wanted to know if I'd told my mum yet, and I said I hadn't, so then he said he'd bring her up the next day, for me to tell her. So, then the next day they both came up, and he left me alone to tell her and she, she just looked distraught, when I told her [pause]. She looked like a pit had just opened up in front of her.

Having taken the antidepressant 'Seroxat' she says could make better sense of her experience of...

Having taken the antidepressant 'Seroxat' she says could make better sense of her experience of...

View topic summary
SHOW TEXT VERSION
PRINT TRANSCRIPT
Well when my mum found out that I'd been on Seroxat when it happened she referred me to the Panorama website. She told me a little bit about it, but I felt quite sceptical about it because I hadn't related what had happened to the Seroxat. I'd felt that that was just how my depression had developed. And when I went and read the descriptions other people had given of their experiences on Seroxat, it was absolutely stunning. I was amazed to find descriptions of very similar feelings and physical side-effects that I'd had. And it was, it was a big relief, to feel that maybe it wasn't just my head being that messed up, maybe there had been this outside influence, and you know, that other people had experienced it and had got better.

So when you discovered this website, what did you do next?

Well I read through a whole lot of descriptions by other people and went away and thought about it a lot. And I kept going back to see if there were any updates or anything, and in the end I sent an email with my experiences, just to, you know, add my contribution and back up what the other people were saying.

And because all the experiences were slightly different, because some people had some side-effects, and other people had others and some had a mixture, you know perhaps, perhaps it was in some ways significant, the precise reaction that I'd had. And it.... it did help me to think much more clearly about what had happened, and to think from stage to stage, and to... actually I hadn't thought about the fact that all this had happened so quickly after I'd started to take Seroxat. It was just like I hadn't been thinking.

Says that she fell in love with her best girlfriend and slowly came to terms with her...

Says that she fell in love with her best girlfriend and slowly came to terms with her...

View topic summary
HIDE TEXT
PRINT TRANSCRIPT
It was some time in the early part of that year that, you know, I was forced to come to terms that I was actually in love with my best female friend. I'd been talking to her about my thoughts that maybe, I was a lesbian, maybe actually I wasn't attracted to men at all. I had felt for a very long time before hand that I was attracted to women, but I had very confused feelings about men.... And I came to terms with that slowly but gradually over that year really. But I can't remember exactly how I realised I was in love with her, but at some stage I just realised there was no way I could deny that anymore. That was simply the case.... I think it was from counselling that I worked out what my actual feelings were for my friend.... My counsellor picked up how strong my feelings were for my friend, and it was easier for the counsellor to suggest homosexuality than for me to face it myself.