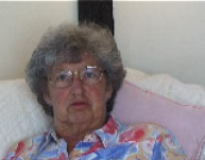 Describes the frustration of not being able to do all the things she would like to.

Show in context
SHOW TEXT VERSION
PRINT TRANSCRIPT
I've got a lovely garden and lovely birds outside and I mean actually when I left the hospice when I was really ill they bought me a bird table and a um, a bird bath and we get the most beautiful birds, but I'm sick to death of those birds! I like people, I like life, I like being with people, I like doing things.

And I've had books to read and I have tried doing decoupage and all sorts of different things but it's not me. I'm the one that gets up and does things and this is what I resent because I can't do it.

When we were younger we hadn't got much money, we couldn't afford to go on lovely holidays or anything. We've worked hard and now we've retired we can afford to do things, also I, I always used to suffer with claustrophobia and never had enough courage to go on aeroplanes. And I'd just got that courage and I'd just started to go abroad and do things and see things and I just hate the fact that I, that's all stopped.

I know you shouldn't be too bitter and angry and I know there are an awful lot of people who are far worse off than me and I know I've, I have been abroad sometimes, I have seen things and I have seen my children grow up and, but I don't feel ready to stop living yet. Mind you I'm determined that I'm jolly well not going to if I can help it!

Describes her strategies for dealing with the side effects of her chemotherapy.

Show in context
SHOW TEXT VERSION
PRINT TRANSCRIPT
I never go to bed if I feel tired. I lay on the settee I mean I've known people who get undressed and go and have a sleep in bed, well that's making yourself an invalid and I don't like that.

As I say I try to sleep in the car so that I'm not wasting valuable living time.

But when I got to a point once that my mouth was so bad I used to liquidise mangos and bananas and lychees and melon because I found they really helped, they were, its funny you couldn't taste strong things but I could taste a bit of melon.

And I've always made casseroles and things that, if I can't swallow and chew too much I liquidise all the casserole so at least I've got all the nourishment because I do try to keep myself eating properly and keep myself strong and healthy in that way.

I know it's an effort and I don't want to waste too much time, good living time just working but it's still being normal and so in, in those ways you know, it helps.

Despite her scepticism about it she has found visiting a healer helpful.

Show in context
SHOW TEXT VERSION
PRINT TRANSCRIPT
Now I'm a very down to earth, very sceptical person but I thought well I had asked so I would go and try it. And I went and I can't explain what happens to me when I go.

She has never professed to be able to cure me, she says that perhaps she can help my immune system and she can give me a little bit more energy. Um, and it's, she's a very devout believer in these powers that she's got.

And I laid there and she said think of beautiful colours. Now if you normally just lie and shut your eyes you can try hard and imagine colours but you don't get a lot of really vivid colours, I've never been able to do it otherwise.

But I did get these lovely colours. I've looked to see if she was burning anything that would influence me or anything at all. There was nothing, and when she put her hands just over me it was like an electric fire.

And, but then, sometimes when my feet have been bad she gets to my feet and her, and it's cold. Now I've touched her hands, they're neither hot nor cold um, and it's just something I can't explain.

Now the specialist I went to I did tell him about it and he said "Well continue," he said "Because something's helping you." And he said "We can't prove anything we just don't know."

Her diagnosis of inoperable cancer was insensitively conveyed.

Show in context
SHOW TEXT VERSION
PRINT TRANSCRIPT
We were ushered into this tiny little room, which was more like a cupboard. I know facilities at hospitals aren't very good but it was kind of perched on the edge of things and it was all where the nurses had their clothes and bags and things.

But the consultant just came in, and I mean I know perhaps they don't like telling bad news but he said "I'm sorry but I can't operate your liver's far too bad. If we did operate the operation would kill you because of your liver as well and he said "I'm afraid there is absolutely nothing I can do for you."

So I said "Well, how, how long do you think I've got to live?" So he said "Oh possibly six months." And um, he didn't say a lot else and I said "Well isn't there anything I can do?" and he said well he would refer me on to the oncologist.

The consultant never even said "Well how do you feel? Do you feel ill? Are you in any discomfort or are you in any pain?" Nobody had asked me that at all. "How are you managing?" And I mean actually my symptoms just before that had been so bad it was uh difficult to go out because the bleeding had got so bad and the bowel problems had got so bad.

Poor support outside of normal working hours is a problem for a palliative chemotherapy patient...

SHOW TEXT VERSION
PRINT TRANSCRIPT
When you have the chemotherapy, the chemo unit is always available for you to, and to help you from Mondays to Fridays but Saturdays, Sundays and Bank Holidays there's nobody there. But you have to phone this other hospital up which is quite a long way away where there's a ward and they're very helpful but of course they don't know you.

Because we live in the country it's quite frightening if you want an emergency doctor. Um, things have improved in the last few months again but at that time there was no emergency GP service. It was all right if you were ill between nine and four but after that you dialled the emergency number and somebody had to come from well at least, nearly 30 miles away.

Another time I had to call out, because I phoned the chemo unit and they said "You must see a doctor and you must see one today," and it was a Saturday but I did manage to get somebody who only, the GP's surgery that's only about eight miles away. Well eventually when he did come he said "Oh well it's no good me coming two hours after the event," he said "You needed somebody," because I think it was something to do with my blood pressure might have dropped very low and, he said "Next time don't bother to call me just dial 999."

But I mean even here where we live the ambulance service is a long way away and you don't feel like bothering an ambulance crew. Anyway so it makes you feel a bit unsafe and in a very kind of dangerous position often.

She is aware that her options are becoming more limited.

Show in context
SHOW TEXT VERSION
PRINT TRANSCRIPT
Well I don't have a lot of choice because if I don't have it I'm not going to stay alive. I mean I'm now on irinotecan which I've had once before and nobody's quite sure whether it's going to be effective the second time around, I've only had one dose so far. But I'm just hoping and praying it is. My oncologist says he has got one or two other treatments that he knows, I'm not sure what they might be because I understand from what's said there aren't many people that have been on chemotherapy continuously for two years in any case.

But, this time I mean I was told that my bone marrow is beginning to change, there's been signs and perhaps I won't be able to continue you know for too much longer. This is why I'm glad I've heard that there's now another drug that's not actually chemotherapy, it can be in pill form but I believe you can have it infused as well which stops the blood supply from the tumour.

Do you know what that's called?

No. I've seen it being given it's bright yellow, but I don't know the name. But again because it's still on trial I don't know, but I, I don't mind if I have to pay for it or whatever if it's gonna keep me alive a bit longer.
Previous Page
Next Page