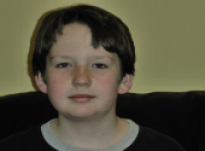 Age at interview: 12
Brief Outline: Will took part in a Swine Flu Vaccine Trial approximately 12 months ago. Will enjoyed taking part and likes helping others.
Background: Will is 12 years of age, attends a local school and lives with his parents and elder sister. Will is a member of St John's Ambulance and would like to study to become a doctor.

Will’s mother consented for Will to take part in a Swine Flu Vaccine Trial in 2009 after receiving an email at her workplace asking for volunteers. The trial took place at a local hospital and they had to make three visits. The first visit was a lot of information gathering and explanations about the trial and what it involved. It also included a blood test and a “jab”. However, because the visit took a long time, Will says he found it too long and got “a little bit bored but not too much”. There were things to do there including Nintendo’s. The second visit involved having a “jab” and the third visit was another blood test.

He says he, “didn’t feel a thing” and didn’t mind having the jabs or the blood tests. Although he does say that when having the first blood test he was a bit nervous. Will says that all the nurses and doctors at the hospital were nice. In between the visits, Will had to keep a daily diary of how he felt and if he experienced any headaches or aches in the arm.

When asked why he agreed to take part, Will says' “Because I like helping.” Because the visits were scheduled at weekends, this meant Will did not have to miss any school. At the final visit he was given a monetary reward which was both unexpected and a surprise. Overall Will enjoyed taking part and would consider, with his parents, in taking part in a similar trial.

Will and his mum responded to an email asking for healthy children volunteers to take part in a...

Will and his mum responded to an email asking for healthy children volunteers to take part in a...

View topic summary
SHOW TEXT VERSION
PRINT TRANSCRIPT
Will' Well, first we had the email that, from the people asking if I would like to do it and we said yes.
Mum' And then you were asked to go to the children’s hospital.
Will' I was asked to go to the Children’s Hospital to have, nine, for a swine flu trial for the test of the vaccines. The first time I went, we had, I had a blood and a jab, and the second time we went, three weeks later, and I had just an injection. And then the last time, three weeks later, I just had a blood.
Tell me about the information that you had?
Will' They gave me some information on like what the injection was for. There was Buster, Baxter and Glaxo. And they asked you which one you were going to have and told you.
Did they, they told you which ones, but did they say, did you know which one you were going to have? Or did they say you won’t know which one you were going to have?
Will' They told me which one I was going to have.
Mum' I think there were two and they were randomly selected. That’s what happened.
And what was the vaccine for?
Will' Swine flu. Because it was quite a big outbreak at that time.
So the information told you all about what you had to do?
Will' Yes.
And did you understand all of the information?
Will' Yes.
Were there any questions that you wanted to ask?
Will' Not really, no.
Not really? Did they explain about any side effects at all?
Will' Yes.
How did they, how did they explain the side effects to you?
Mum' Like temperature.
Will' You could like get a temperature. You could have, come itchy or have a rash.
And were you, did that bother you at all?
Will' Not really, it didn’t.

Will was a bit nervous about having blood samples taken, but the magic cream helped and he soon...

Will was a bit nervous about having blood samples taken, but the magic cream helped and he soon...

View topic summary
SHOW TEXT VERSION
PRINT TRANSCRIPT
Will' I was asked to go to the Children’s Hospital to have, nine, for a swine flu trial for the test of the vaccines. The first time I went, we, we had, I had a blood and a jab, and the second time we went, three weeks later, I had just a injection. And then the last time, three weeks later, I just had a blood.
Tell me about what happened, the process, what you had to do, how many appointments you had and what you had to do at each appointment.
Will' Well, I had three appointments. And every time we got, we had to wait in the waiting room and there was entertainment like Nintendo 64s.
Was that the good bit?
Will' It was. And then they would ask you in for your appointment and then they would tell you what they were going to do. We had three appointments and as I explained earlier there were different things that happened in them.
So what happened in them, each one?
Will' Well, the first one, I had the information, a blood, then a injection. And then the second time, three weeks later, I had an injection. And the third time, three weeks later, I had a blood.
So there were three, three different appointments? Were you very long at each appointment?
Will' About, at the max about an hour and a half.
Mum' That was the first one.
Will' Yes.
So the first one was quite a long time because they were talking to you?
Will' Yes.
And the second one they were, did you have to wait very long at all?
Will' About –
Mum' Half an hour.
Will' Yes, about half an hour, I had stuff to do.
What was it like? Have you had blood, blood tests before?
Will' No.
What was that like for you?
Will' It was fine because I didn’t really feel a thing when that cream was on me.
So that was nice to have that, the magic cream? So they did, gave you that every time?
Will' Yes. They, they also gave you a tube in the information pack when you went away. So you could put it on like 45 minutes before.
Previous Page
Next Page