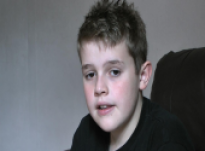 Age at interview: 12
Age at diagnosis: 11
Brief Outline: Although the doctors and nurses talked to Ethan about the trial, he doesn't remember too much about it. He says it was all a bit too much to take in at the time and he just wanted to get better.
Background: Ethan is aged 12, lives with his parents and his sister at home. He attends a local school and enjoys going to ju jitsu. Ethan was diagnosed with a brain tumour at the age of 11 and very soon after his parents were approached and invited to enrol Ethan in a clinical trial.

Ethan is aged 12, lives with his parents and sister, attends a local school, and enjoys ju jitsu. At the age of 11 Ethan was diagnosed with a brain tumour. This was a shock to him and his family. Soon after his diagnosis, Ethan’s parents were approached by the doctor at the hospital and invited to enrol Ethan in a clinical trial. Ethan remembers the doctors talking to him about the trial and having information, however, he doesn’t remember too much as it was all a bit too much to take in.

Ethan says that he would have liked to have understood more about what was happening. He says, “They could have been telling me and I just wouldn’t be hearing it properly”. He is unsure if he is still in the trial and thinks that it would be nice to be kept informed about what is happening. He also says that it would be nice to have some information about the trial that isn’t too long and is easy to read and understand, perhaps using pictures.

Ethan remembers being informed about the trial but he cant remember any of it, he just wanted to...

Ethan remembers being informed about the trial but he cant remember any of it, he just wanted to...

View topic summary
SHOW TEXT VERSION
PRINT TRANSCRIPT
And at what point were you invited to the clinical trial?
I don’t know, I can’t really remember it that well bit I think it was about January.
Was it?
Yes.
Was it when you were in hospital?
I don’t know I think so.
What happened, what did you know about it?
I don’t know they spoke to my mum and dad quite a lot so I didn’t know what was going on.
Ah okay.
It would be one day you’re going up this hospital then you’re going up the other so it was all quite a shock to me.
Was it?
Yes.
Did they talk to you about it about what you were going to do?
Yes they, well they did like talk to my mum but they said they’d talk to me more because I was the one that was actually going through with it, so yes.
Do you remember anything that they told you at the time when they talked to you?
Not really.
No?
No.
It’s all gone now hasn’t it?
Yes.
It’s in the past.
Yes I kept having like loads of visitors telling me all this stuff like doctors but I can’t remember any of it really.
And when you took part in, you say you took part in a clinical trial, do you know what the trial was about or what the purpose was?
No.
Do you think you would like to have known?
Yes.
Did you think to ask anybody or not at the time?
Not at the time no.
Why was that?
I don’t know really, I just didn’t really think about it I just wanted to get like, you know, get better and that.

It would have been helpful if the researchers had told Ethan whether the trial had ended. He was...

It would have been helpful if the researchers had told Ethan whether the trial had ended. He was...

View topic summary
SHOW TEXT VERSION
PRINT TRANSCRIPT
And did they, they didn’t mention anything about this is the end of the trial or not?
Not really no.
Did you think it’s important that you do know?
Yes.
What would you...
I think they should, they should have told me that it was the end of it because like because I wanted to know if I had to go back or anything and like stuff like that like if I had to go back but yes. I just, I just think they should have told me before I left but obviously not.
I mean if they could improve, you know, taking on your experience in to account that you say that at the time you more importantly wanted to get better. But if they could improve a clinical trial, for like yourself taking part, how could they improve that? If you had a message to say to them?
I think that they could have told me that it was finished like if I needed any improvement or anything. Wait I think they did tell me that I needed improvement I’m not quite sure, yes I think, no I don’t think they did. But Iike yes they need to tell you when like if you’re done, they need to tell you like I can’t really think I’ve got it in my mind .
Take your time.
They could tell you that that like, yes that’s it really I think they did everything else like what they told me, what I think they really need to do is tell you like that you’ve finished and that.
Previous Page
Next Page