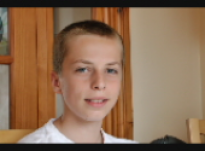 Age at interview: 13
Age at diagnosis: 4
Brief Outline: Before taking part, Danny had to sign an assent form to say he agreed to take part in the trial. He was happy to take part and found it a good experience and learned more about his diabetes and how it affected him.
Background: Danny, aged 13, lives with his parents and sister and attends a local school. Danny was diagnosed with diabetes at the age of four and recently took part in a randomised trial on the management of diabetes in young people.

Danny, aged 13, lives with his parents and sister and attends a local school. He was diagnosed with diabetes at the age of 4 years and recently he took part in a randomised trial on the management of diabetes in young people.

Danny was invited to take part when attending a routine clinic appointment. His parents first gave their consent and then Danny had to sign an assent form to say he agreed to take part. The research nurse explained what would be involved if he took part and the purpose of the trial.

Danny had to complete a total of three questionnaires and was also interviewed by a member of the trial team. Each questionnaire was based on multiple-choice answers and took about 10-20 minutes to complete. Questions asked included; how you cope and manage your diabetes, how other people think about you and how you cope at school.

The interview at the end of the trial allowed Danny to express his feelings. He felt he could say...

The interview at the end of the trial allowed Danny to express his feelings. He felt he could say...

View topic summary
SHOW TEXT VERSION
PRINT TRANSCRIPT
When, I think when I got the questions they were more like easier to say in your head. So when you read it, it’s like really easy to understand. And then you had like 1, 2, 3… 4 being like never and 1 being almost always, and stuff like that. I didn’t see the parent one but I think that must have been a lot harder.
So it was easy for you to complete as well? It wasn’t like -- -- complicated words? Just like tick boxes and numbers?
Yes. Tick boxes and circle words and numbers.
That’s straightforward then, isn’t it? If it had been wordy would it have been more complicated, do you think? If you had to write more?
It could have been a bit more like, if they would have used more like complicated words, it would have got a bit like confused in your head. After a, after you’ve done like most of them and you’ve got a last few left, you just get like a bit stressed in your head.
Stressed in the head – a bit too much? So they made it nice and clear for you? And did you understand all the terms that were used? Were there any word you didn’t understand?
I did understand all of them. Yes, there weren’t any words that I didn’t know.
And in terms of your experience, the whole thing, have they said anything about the results of anything yet? Because you filled in three questionnaires? Do you know if it’s ended?
I don’t, I’m not sure if it’s ended or not. They haven’t, I haven’t had any results yet.
I know I’ve had an interview from someone from the trial and they were asking me like, like how long I’ve been living with diabetes and, the same questions that were in the book really. They just wanted to get it on like, um on tape.
So they did that, was that at the beginning?
No. That was, I think it was near the end. I don’t know if it’s finished or not. I really don’t know.
So that was after the third questionnaire? They came out and interviewed you like this and had a little -- -- recorder? And did they ask the same sort of questions as on the paperwork?
Some of the questions were. It was more about like, because when you’re doing it in a, like a question form, you don’t have many like, well, it says, “How do you feel about it?” and it says, “How do you feel about diabetic?” And [are you] sad, happy is, they’re the only like couple that you get. But in, when you’re doing it in person you can say more; you can say more than you can than writing it down.
So do you think that was a good thing, that you were able to clarify some of the things?
Yes. Yes, it was.
Because it’s a bit sort of one thing, isn’t it? If it’s sad, happy. You can be sad, but you’re not, you need to explain that - don’t you really? So that was good?
Yes.
Did it take long, the interview?
No. It took about half an hour with me and then they had um I think about the same for my mum and dad.

View topic summary
SHOW TEXT VERSION
PRINT TRANSCRIPT
Would you have a message for them about young people taking part in clinical trials?
Yes. I could tell them to like do it more often. Because this is the first one I’ve only took part in. And it would like, it, it would definitely help like younger people that have only just been diagnosed. Because my mate’s been diagnosed not long ago, about a week ago I think, and he’s, I’ve been helping him as well. So it can help people a lot.

Being in a trial has helped Danny better understand how to cope with diabetes at home and at...

Being in a trial has helped Danny better understand how to cope with diabetes at home and at...

I’d say definitely take part. Don’t like, don’t hesitate about it, because it’s, it will definitely help you. And plus you get a reward. So it’s good as well in that way. And it could help other people that have just been diagnosed. Because the hospitals, they give a, quite a lot of information, but they don’t go into loads of detail about like how you’re going to cope with it at school or at home. So they could just like because that trial could really help them when they’re at home if they’re like struggling or they’re forgetting to do blood tests. And, and if they’re always feeling ill they can just, say, say if you’ve got like problems with the diabetes, if you’ve done that trial it will definitely help you with them. So then you know for the future.