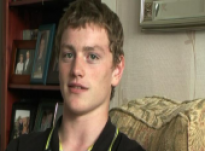 Age at interview: 17
Brief Outline: Christopher has taken part in three clinical trials as a healthy control. Two of these trials were to compare healthy children's growth and development to that of children with attention deficit and hyperactive disorder (ADHD). He enjoyed the experience.
Background: Christopher is 17 years of age, White British and lives with his parents and elder sister. Christopher is currently studying for his A levels. His hobbies include archery, computing and rifle shooting.

Christopher is 17 years of age and currently studying for his A levels. He lives with his parents and his elder sister. He took part in three clinical trials. Two of these trials were to compare healthy children’s growth and development to that of children with attention deficit and hyperactive disorder. Christopher took part in each trial as a healthy control.

Christopher’s mum volunteered him for the trials through an advert in the local newspaper. She and the research team explained everything to him, what it was, what it involved and why they were doing the trials. He felt that everything was very clearly explained.

Christopher enjoyed receiving the results from the scans and other measurements such as body mass, bone density and fat index and winning prizes when taking part in computer games. He found it all very interesting. In one of the trials, Christopher had a brain scan and an MRI scan. While in the scanner, he had to do computer games to determine which part of his brain was working.

After these experiences, he would certainly take part in other similar clinical trials. There were no side effects. Although Christopher felt that getting a small payment for taking part is an incentive, he would take part even if the money was not there.

Christopher thought that all trials were only for those 18 years and over. His parents made him aware of clinical trials and that children of all ages take part. However, Christopher was aware of the risks of clinical trials and although he would be keen to take part in similar trials in the future, he would be wary of trials that involved taking risks such as drug trials.

If he had to travel long distances to get to the trial venue he would be less keen to take part and as his school studies get more intense he may have to reconsider.

His science lessons at school helped him understand why ‘healthy controls’ are need for clinical research. Having trust in those doing the research was important too as was getting the results. To improve his experiences, Christopher would have liked to have taken a friend with him to chat with whilst waiting in between tests.

Christopher had an understanding of why he was being asked to take part as a healthy control, but...

Christopher had an understanding of why he was being asked to take part as a healthy control, but...

View topic summary
SHOW TEXT VERSION
PRINT TRANSCRIPT
Yes, yes it’s going to help people, I’m not going to be a doctor or anything so I can’t really help people first hand but if I can do this then help people out yes so it’s good.
How, is it through your parents that you became aware perhaps of clinical trials?
Yes I do, I do I thought all trials would be for 18 and over’s but they have children as well, bit silly of me to think that but yes I thought you had to be older to take part. But I know any sort of any age if your parents are happy to do it then that’s fine and it’s safe obviously.
And what do you understand, if you had to explain to your friends about a clinical trial, how would you, in your terms, describe that?
I would say trials are to helping out research into certain diseases or whatever’s going on in someone’s life, if that’s the right expression. But yes it’s just its harmless really, it’s just something to do, it’s an experience.
Yes. And what about the understanding of being control, did you understand that?
Yes well we do science in school on control variables and all these dependent variables. And so yes control variables, I’m the one who’s being compared to, so the ADHD (attention deficit and hyperactive disorder) children they’ll be compared to me to see if, a normal child like me will go for this long before the reward whereas they might go quicker or lose interest.

Being able to take part in the research during school holidays was really helpful, but if it had...

Being able to take part in the research during school holidays was really helpful, but if it had...

View topic summary
SHOW TEXT VERSION
PRINT TRANSCRIPT
Do you think there will be any barriers for you in taking part, you know?
No, only if long distance, whatever, I wouldn’t really put myself out too much. Most of them are in [area] so it’s easy access but if it’s somewhere far away I wouldn’t be so keen.
I think now that I’m going to Uni, I don’t know if they clashed with anything at school or anything I’d rather do the school. Because I’m in A level in my studies quite important. Whereas like in year nine I’d loved to miss school but yes now studies are getting a bit more hard then I’d have to take school over the studies. Yes things like that.
So the time might be a barrier?
Mmmm yes.
And your other commitments?
Yes and, yes so. But they do give you a range of dates and things like the one that’s coming up that’s in August, so summer holidays and they give you like we can do it from the 15th to the 20th or start in September so yes there’s a wide range of dates.
So if it’s one day, what if it was over a week would you consider it, you know if there was a week?
Yes I’d consider it if it was in the summer and nothing’s going on then yes I’d definitely consider it as well.
But not during school?
No, no try and avoid that.

Chris would be more cautious about taking part in trials that offered money, but having a reward...

Chris would be more cautious about taking part in trials that offered money, but having a reward...

View topic summary
SHOW TEXT VERSION
PRINT TRANSCRIPT
Yes, I would take some risks.
What do you mean by some risks?
I would take something like I would if there was a new scan or whatever that might be used in some new technology or stuff, if I, I’d do that fine. I don’t know about taking any sort of new drugs I think I might leave that but sort of new technology that’s fine.
Yes.
It’s fine by me yes.
So you have information and then?
Yes.
And why do you think why do you want to do that, what motivates you to actually want to?
Well all the research and things and you’d have a part in the research and then five years down the line on the news it will come up scientists have made a cure for some certain thing and you think “Well I helped in that”. And sort of I’ve done something then with my life instead of just sitting around doing nothing. And also you get, you get your money, they will pay you money which is great for me, I always need money.
Is that an incentive is it?
Yes that’s an incentive but yes I love the fact that you’re just helping out doing the research because I’m not like going to be a doctor or anything so it’s good to help out.
If the money wasn’t there would you still do it?
Mmmm?
If the money wasn’t there...?
Yes I think I’d still do it yes, carry on yes. Because it’s a great, as I say a great experience because you get to do things that only people who are really in a bad situation would be able to do so you get to use these sort of great technical, technological pieces of equipment that have cost millions of pounds or whatever and you’re not ill so. That’s the great bit about it.
Do you think that in terms of trying to encourage younger people to take part in clinical trials and healthy young people as well, do you think that sort of having the payment is a good thing to offer at the start or?
Yes I think payment is of, a lot of young people are looking for payment for things and if it’s free they’re going to be “Oh I don’t want to waste my time doing it” because, especially if it’s new to them and they don’t know what’s going to happen. Then they might need that extra boost to get them going. But once they see what it’s like and yes it’s an enjoyable experience, it’s not a boring or anything.
Yes, it’s just taking part.
Yes.
Do you think sometimes, because some would say like that the payment is a risk there might be a.......
Bigger one.
A not a good incentive? You know, the incentive may be wrong because they may be doing something at risk?
Yes I think you’ve got to have a bit of common sense about what they’re doing on this, It’s like, you know, sort a little ad in the newspaper saying like we’ll pay you £1000 to test our new drug, I think you’ll, woh, stay away from that but sort of, really the money is just sort of just to get you interested with most things and the money makes the world go round these days.
Previous Page
Next Page