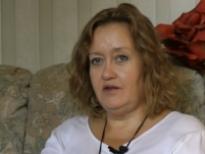 Age at interview: 47
Brief Outline: Karan was born with a cleft palate and underwent plastic surgery at 6 months, 5 and 10 years of age and orthodontic surgery at 20 years. Karan has recently undergone further surgery to realign her jaw as she was not happy with her appearance.
Background: Karan is currently self-employed, works voluntary as a street pastor, and is married with a teenage son. Karan is white British.

Karan was born with a cleft palate and underwent surgery at 6 months, 5 and 10 years of age and orthodontic treatment as a late teenager. However, Karan was not happy with her appearance and this affected her self-esteem as an adult. Following a recent visit to her dentist she discovered that she was eligible to receive corrective surgery through the NHS and has recently undergone further orthodontics to realign her jaw. Prior to the surgery she met with a multidisciplinary team to discuss what the surgery would involve and the potential outcome of the procedures. Karan underwent a number of speech and language tests, orthodontic assessment, x rays and other photographic procedures.

Karan found the preoperative process to be a very emotional experience. Karan was also very anxious prior to her surgery but was supported by her husband, her faith and the prayers of her local community.

The surgery was conducted within a day and the post-operative care included not chewing for 6 weeks, eating only soft foods through straws, avoiding hot foods etc. A few days later she was discharged from the hospital following a post-operative appointment where more x-rays were taken. Karan then had an appointment with an orthodontist who fitted a series of tiny elastic bands of different strengths around her teeth to realign her bite. Karan became quite adept at fitting and taking off the bands herself.

Finally, Karan is keen to raise awareness of cleft issues, particularly for adults who have fallen through the treatment net and is a lay representative for a cranio-facial studies group.

Karan was born with a cleft lip and palate and was informed she would be able to receive orthodontic treatment as an adult within the NHS.

Karan was born with a cleft lip and palate and was informed she would be able to receive orthodontic treatment as an adult within the NHS.

View topic summary
SHOW TEXT VERSION
PRINT TRANSCRIPT
For a long time I was still unhappy with the way I smiled, or I didn’t feel I could smile openly. And I really wanted to be able to just... you know, I’m a happy person, I couldn’t sort of relax... and have an open smile. And… you know, people, when you first meet somebody, the first thing you do is look at... check their eyes, yeah, you look at their eyes, and then how they smile at you afterwards, yeah, I think so. So if half of that’s not working as well as it could, I think it has an impact. I don’t know, [laughs] but anyway my... so yeah, so a long time, for a long time I wasn’t happy with the way I looked. And I thought... that was it, you know, this is your lot. And... I sold, I... remarried and sold a property, and had some money left over, and said to my dentist, “Oh I’d like to just get my teeth straightened out a bit.”

And I thought I had to pay: that’s why I hadn’t looked into it before.

Because orthodontics over the age of 16 or whatever you had to pay, didn’t you?

So I spoke to my dentist and she said, “Well no,” she said, “you were born with a cleft, weren’t you?” She recognised that.

And, yeah, it was good, and she said, “Well if you were born with a cleft your healthcare is... still with the NHS.”

And I was absolutely shocked.

Karan’s dentist noticed that she was born with a cleft palate and suggested that she could get her jaw realigned through the NHS. Although Karan was keen to have the treatment, preparing for the surgery was an emotional experience.

Karan’s dentist noticed that she was born with a cleft palate and suggested that she could get her jaw realigned through the NHS. Although Karan was keen to have the treatment, preparing for the surgery was an emotional experience.

View topic summary
SHOW TEXT VERSION
PRINT TRANSCRIPT
Yeah so it was a complete shock... that... the NHS still had... a door open to me really.

Well good on the dentist too for recognising.

Yeah for flagging it up.

Yeah she phoned through and... you know, established that I still had entitlement to care.

And I was just stunned. I could have done it ten years earlier.

Yeah I appreciate that must have been completely like a bombshell.

Hmm OK, so what happened from then?

Well she referred to an orthodontist.

Because my feeling was I didn’t want to have surgery because when I had surgery when I was 20 it was quite... had quite an impact. I lost a lot of blood; I lost something like seven or eight pints of blood.

And I was in surgery for hours. Yeah, I was in surgery, I don’t know, something like six hours or something. So [clears throat] I was quite keen not to go through that again because it took me a long time to recover. I was very weak for a long time.

And it just, it just knocked me sideways, so I didn’t want to go through that again. So I thought, “Oh I’ll just have, you know, perhaps some braces for a, you know, couple of months [laughs]. And but my orthodontist obviously could see that there was room to work with and he could, he obviously knew what look... the team could get, I guess, and persuaded me to go ahead along the route of orthodontics followed by surgery followed by orthodontics.

So I jumped in with both feet and... went for it. So I got referred to [hospital name] to see if my palate could withstand the surgery that they would want to do.

What did that involve?

OK so was that with the whole team?

Hideous; I hated it.

Can you explain that a bit more?

...I understand why. And of course, you know, I can see how it works, and it works really well, but I just felt awful. I just didn’t enjoy it at all. I felt... very small and very...

People sitting around talking about you?

Yeah, yeah and, yeah, I do understand why. I just thought it was in a horrible room.

It would have felt nicer in an office or in a lounge or in a conference room or, I don’t know, but not in this really daggy surgery room. And I just thought, “Oh my goodness.” I mean I ... coped with it, to a degree. I mean I was very emotional; the whole thing is very emotional for me, you know.

Did anyone go with you on that day?

Yeah I took my cousin. Yeah, I didn’t go on my own.

Was it the fact that they were talking about you, the language they used or both or?

I just... what I don’t like about clinicians is... they... assume you’re ignorant, OK. They talk... I wish they’d tell me everything, you know. Or I wish they’d... I mean they were looking at my palate and I had this test, this machine, where I sat in this machine, and there was about eight of these people in this room, and students, and that’s fine, but I wish they’d said to me, “We’re just looking out to find out, you know, if your palate can’t cope with this then,” you know, I wish they’d explained more of what was going on and what could happen if this isn’t right, or what could happen if that is wrong. You know, I just wanted to know more about the whole thing, not... I mean nobody was wrong, but it could have been better, it could have been better. I just felt like... you’re talking about rearranging my face... you know, it’s not like, you know, reshaping a toe; it’s my face [laughs].

And I didn’t feel... I don’t know, I felt there could have been more said really.
Previous Page
Next Page