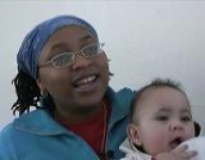 Age at interview: 23
Brief Outline: Bad hospital experiences. Copious milk supply, leaking, engorgement, solids at four months followed by breast refusal and early weaning. Now a peer supporter for other breastfeeding women.
Background: At the time of interview, this 23 year old, Ugandan woman was breastfeeding her 10 month old son. She also had a 4 year old daughter, whom she had breastfed. A full-time mum & volunteer, she was married to a construction worker.

Born and brought up in Africa, this woman came to the UK when she was 5 years old. She was 19 when her first child was born, new to the area in which she and her husband were living and very lonely. She had no one to talk to about pregnancy or breastfeeding and, in spite of breastfeeding being common in her family of origin, didn't really know anything about it. She thought that the way she was treated in hospital after the birth of her first baby by caesarean section was horrendous, receiving very little help, being patronised and made to feel that she had to breastfeed or she would be seen as a bad mother. Her baby was given formula without her permission. She discharged herself against advice and went home to learn to breastfeed by herself. She had more help after her second child was born, also by caesarean section, but is frustrated not to have experienced early skin-to-skin contact. She feels that breastfeeding women are sometimes discriminated against in public and often it is other women who are less understanding. She has trained as a peer counsellor with La Leche League so now she encourages other women to breastfeed, attends breastfeeding clinics to talk to other women and helps many of her friends who can't read by going through the pamphlets that they receive from health professionals with them.

She thought that health professionals can be patronising and need to be clearer in their advice...

She thought that health professionals can be patronising and need to be clearer in their advice...

View topic summary
SHOW TEXT VERSION
EMBED CODE
PRINT TRANSCRIPT
What would you like to say to health professionals?

To be a bit more clearer about their advice. To not to be so patronising because they do talk down to you and make you feel like, like what they say is the law you have to do it, and I think to actually sit down with you and read through the, the pamphlets that they give you, and explain to you what everything means, because most mums can't read, that's another issue as well you know. And they give you all these things and you're like you're just looking at it, most of my friends can't read and they're just looking at it and I have to read it to them and explain to them what they're meant to do and how they should do things, there's not a lot of explanation you know, especially with the breast pumps as well, it's not as clear as it should be.

Feeding her hungry child is more important to her than her image. She has felt discriminated...

Feeding her hungry child is more important to her than her image. She has felt discriminated...

I didn't really think about it I just thought my child's hungry, my child needs food, I didn't think, 'Oh my God what do people think?' I mean I didn't flash my breasts in front of everybody, you know, I was very discreet about it, I mean you do get looks, funny looks and whatever but at the end of the day if my child's hungry they're much more important than my image or what people think of me so I didn't really care, just got on with it.

Did anybody ever say anything to you?

No, not really. And my husband sometimes he would be like, 'What you looking at?' [Laughs], you know? I mean it's, it's normal, I'm not offering it to you I'm offering it to my baby so. D'you know, I thought most women would be more understanding but they're not, just, I don't know.

So do you find the women are less understanding'

Yeah. It's like they look at you like what are you doing, you know? But I don't, I've never felt ashamed, you know. They're my babies, I love them.

What sort of things put them off?

Exposing skin and there's a way of doing it without actually showing your skin you know, so I don't know, I just, I tried as much as I could to, to show young mums that I'm a young mum too, and you can do it in a way where you're not exposing your skin and you can breastfeed your child, you know, in a way without you, without you feeling ashamed but going to certain places doesn't help because they discriminate against that, like certain shops won't allow mums with buggies because they know once you go in there with a buggy you might be breastfeeding and that's going to put their customers off. So there's a lot of places that I couldn't go after I had my kids because they don't allow buggies, they don't allow breastfeeding, there's signs up, you know, which I think is wrong.

What sort of signs?

Just no buggies allowed, some, most caf's that I know it, they'll let you, can have your meal outside and I mean when its winter you don't want to be having your meal outside. Me and my friend went to a caf' and we were told to sit outside to breastfeed, so we had to sit outside and breastfeed because luckily, because it was summer time it was alright, but there were all these buses going past, all these men in the buses watching, just trying to get a bit of skin do you know? It was just. Mmm.

Her baby needed resuscitating and was given infant formula. She was concerned about not being...

Her baby needed resuscitating and was given infant formula. She was concerned about not being...

View topic summary
SHOW TEXT VERSION
EMBED CODE
PRINT TRANSCRIPT
With the second one, because there was complications I had to have an emergency C-Section, he wasn't breathing when he was born so, they just took him, took him away for an hour, I didn't know whether it was a boy or girl or if he was alive, and they were running around trying to resuscitate the baby but it took an hour after he was born, for him to latch onto the breast, but I was reading something which it said, 'Once a baby's born it's important that the first hour they latch on' so I was really like concerned that he wasn't gonna get onto the breast on time, because it says the first hour. And, so I, because they took him away I thought it was going to take hours and hours before they brought him back and when they did bring him back they said to me that his glucose was low so they had to give him fake milk, that's what I call it fake milk. So I didn't understand why they had to give him milk that wasn't from me basically, so I asked them, 'Why can't I give him breastmilk?' And they said it would be better for him if he had fake milk and I said, 'oh I think it would be better for him if he has his Mum's milk and I would like him to latch on because it's been an hour already as it is'. You know, it was getting a bit ridiculous and I really wanted him to latch on, so they just gave him to me and he latched on straightaway.

What sort of response did you get when you were strong and telling them what you wanted?

Well they just thought it was best, that he, they gave him fake milk and put him somewhere, and I thought it was best for him to stay with me and to have the breastmilk because everybody knows when a baby's sick breastmilk is the best thing to give them and that. It's good for everything, rashes [laughs], colds, so I always use breastmilk.

Her hospital stay was so horrendous that she discharged herself early. She did not get the...

Her hospital stay was so horrendous that she discharged herself early. She did not get the...

No, nothing. I actually left the next day because it was horrendous, it was really horrendous. The way they, they treat the women in that hospital was disgusting.

What do you mean?

Well I had problems with a lot of leaking with my breasts and instead of showing me what I can do and how to help me they just left me to sleep in a soaking bed the whole night. So I left the next day, I was advised not to but I left because it was just horrendous. I'd rather go home and do it myself and learn myself than, you know. They just make you feel like you have to do it, they don't show you how to do it or explain anything to you, and because it was my first baby and I was nineteen it was even harder so, I just left.

Did you ask anybody for help?

I did ask and they all said they were busy and not to press the buzzer unless it was an emergency [laughs].

I just [laughs] I just felt so angry, I was in so much agony and I was so tired I just wanted to go, I'd rather go home and like let my husband look after me than stay there, so I just left.