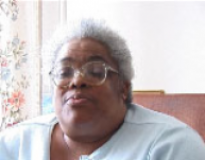 Age at interview: 59
Age at diagnosis: 58
Brief Outline: Diagnosed with breast cancer in 2000. Underwent a mastectomy and was given chemotherapy, radiotherapy and Tamoxifen.

Explains that it is better to enjoy each day than to worry about illness.

Explains that it is better to enjoy each day than to worry about illness.

View topic summary
SHOW TEXT VERSION
PRINT TRANSCRIPT
Yes, women that had, sometimes similar operation or sometimes something different. And one particular one she was always fretting and I'm thinking, so she asked me why am I not complaining.

So I said' "Well I've got one theory. Take one day at a time, live it to the full and don't bother about tomorrow or yesterday. They don't exist."Today is today and that's what you have to think about." She says' "Oh."

And then she said, the next month when we came back for therapy, her husband came in and he said' "Thank you." So I couldn't, you know so I said' "Why, what for?" He said' "Well, telling my wife that she should take it one day at a time and just live for that day. "And since she came home last time she's been, look at her, she's looking better now isn't she."

And I was so happy when he said that, you know I could have clapped.

Explains how her faith as a Catholic helped her cope with breast cancer.

Explains how her faith as a Catholic helped her cope with breast cancer.

View topic summary
SHOW TEXT VERSION
PRINT TRANSCRIPT
You know so for the whole day you might be alright, you feel alright. You feel free, you feel happy. And then the next day it just comes back to you' "Yes, I've got cancer."

Yes, how did you get through the bad days?

I said my prayers. I read my Bible. I've got different little books from, church books you know because I'm a Catholic. So I've got different little books. I read them, said my Rosary. Sometimes I even said my Rosary going to and from the hospital. Because that sort of, once you say your prayers, you feel released like. To me, I don't know about other people, but saying my prayers relaxes me.

And before I went into surgery, the day before, I received Holy Communion. So I know I was prepared for everything, for anything that came. Thank God it came out alright.

Discusses her reasons for wanting reconstruction.

Discusses her reasons for wanting reconstruction.

Well I was told that it will take a couple of years before I can have that if I want it.

I've decided I was not going to, but now, after carrying that thing on my left side, it's a bit heavy to carry for your whole life.So I think after a couple of years I'll go, see if I can have it done. But they said that it can be done.

And you'd like to have it done in a couple of years?

Yes, I've thought about it and I'd like to have it done.

Explains that after the operation she felt able to start to exercise the following day.

Explains that after the operation she felt able to start to exercise the following day.

View topic summary
SHOW TEXT VERSION
PRINT TRANSCRIPT
Then I went upstairs, back up to the ward, and the surgeons were waiting for me. So they asked me if I'm ready and they tried to tell me what they were going to do. So I told them' "Look you're doing your job, I'm doing mine. "You're going to take it off, just take it off. I don't want to know anything that you're going to do before."

He says' "Are you sure?" I said' "Yes I'm sure. I don't want to know. Just when I wake up I know it won't be there." And they took me down. And then I had injections, and gas to put me to sleep. And then when I woke up I was in the recovery room.

And then, well my children were there with me, waiting for me to wake up. And then they took me back to the ward.

I didn't feel any pain until the next day when I felt, I started exercising, because one of my cousins had hers done and she sent me a leaflet with the exercises in it. So I started doing the exercises the very next morning. When the woman, the physiotherapist came, I was already sitting down there with my arms up and down, up and down. She said' "Oh good." So that was fun.

My grandchildren came to visit, my daughters-in-law, everybody my family. Some family I've got, they all came to visit.