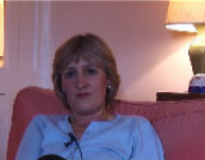 Age at interview: 47
Age at diagnosis: 44
Brief Outline: Diagnosed with breast cancer in 1998. Had a lumpectomy and was given radiotherapy and Tamoxifen.

Explains why she believes that stress might be involved in causing breast cancer.

Explains why she believes that stress might be involved in causing breast cancer.

View topic summary
SHOW TEXT VERSION
PRINT TRANSCRIPT
Stress plays a part, I'm sure in my case that's played a part, because I've been a single parent for 12 years and everyone's lives are stressful, we've all got a certain amount, but it's quite a lot to bring up a family as a single parent.

I've been very much more fortunate than many in that, but it's just tiring and other stresses of life probably all combine, and maybe I had more factors than I realised.

And at the moment we don't really know what they all are. I think it can only be beneficial to cut down on the stresses that you can really. Don't take on things you can't deal with.

I do know quite a lot of women who, in fact I would say nearly all the women I met in hospital, had had some sort of trauma or difficulty.

I mean most people have had traumas in their life by the time they get to their mid-life, but there was a surprising number who'd had difficulties of one sort and another and they'd ended up with breast cancer.

Or they'd had a very unhappy time in one way and another. And I just personally think that that must all be relevant but it's probably difficult to say why.

Describes feelings of isolation and fear about what the future held.

Describes feelings of isolation and fear about what the future held.

View topic summary
SHOW TEXT VERSION
PRINT TRANSCRIPT
I think the trouble is it is a very isolating thing having cancer. You, at the end of the day, have to go through it on your own.

But it does, I think also, it really makes you face up to the idea that we will eventually die one day. And you imagine you're going to die sooner rather than later when you're first told this.

I was quite surprised in a way that I dealt with it myself as well as I did. I think it's very much easier if you think you're going to get better. The fear is the overriding problem. I mean, the fear of the unknown, the fear of what you've got to have done, the fear of how much is it going to hurt or make you feel ill.

If you could just take all that away it would be pretty easy to deal with at the level at which I've had to deal with it.

Advises women to be aware of any breast changes and comments on the effectiveness of treatment.

Advises women to be aware of any breast changes and comments on the effectiveness of treatment.

View topic summary
SHOW TEXT VERSION
PRINT TRANSCRIPT
And just as soon as you find anything that worries you, go to the doctor. It's not just a lump. It can be a skin change.

A lot of women don't realise if they get puckering of the skin, or problems with nipples, that they should go and get them looked at.

Because there are other ways of presenting itself other than an obvious lump. Not to be too afraid. Particularly if you know you've only got a small lump.

But I do think whatever your situation, and whatever you are told, even if you've got lymph node involvement, people still do very well. Things are improving all the time.

And I didn't also know that lymphoedema can occur many, many years after surgery. But I might have got on and had treatment earlier to my shoulder if I'd known that it could suddenly go into such an acute stage.

And I was extremely lucky. I saw a chiropractor about 48 hours after I started the acute phase and I had three treatments with her, and gentle massage, and I recovered incredibly quickly.


Describes her experience of having radiotherapy.

Describes her experience of having radiotherapy.

View topic summary
SHOW TEXT VERSION
PRINT TRANSCRIPT
The process of having the radiotherapy treatment is actually quite short.

The first appointment you're sort of pinned up in a rather awkward position and it's a little bit cold and uncomfortable on the slab. But, in my instance, it was quite a nice wood panelled room, and it had quite a friendly feel to it.

And it's odd being lined up and measured and you do feel a bit like something on a dissecting board. But it's also quite an interesting experience.

Before the treatment you have a planning appointment where you're literally marked out before you're put under the radiotherapy treatment units.

You have this appointment where you're measured up and then you're sort of done again in the x-ray rooms.

And that again was measuring and drawing with felt tip pen and things, and actually quite an interesting thing to go through, it's certainly not painful, it's just a bit uncomfortable.

And you have to lie very, very still in a slightly awkward position for a few minutes, and they used to measure me up and move things around.

The first time it took about ten minutes for the first treatment to get it measured up, and then they'd got everything sorted and subsequent treatments it was very quick.

And the room was darkened and you'd see all these red lines and marks where the lights come down.

As I say it wasn't unpleasant but, if you're feeling a bit depressed, when everybody rushes out of the room and the lights flash you do feel very alone, or you can feel very alone.

And that's probably why it would be nice to take somebody with you. But people react differently in these circumstances and want different things.

Describes how she dealt with breast soreness after radiotherapy and the creams she used.

Describes how she dealt with breast soreness after radiotherapy and the creams she used.

When you bathe you're not allowed to soak the breast or soap it, and you can just splash it. I mean for 6 weeks it's slightly awkward to lie in the bath. I prefer a bath. I found a bath was better than a shower because a shower would mean that it was constantly wet.

As I say I did use topical cream, a special cream that they recommended. I also used aloe vera which I know some places are doing a study on because it has very healing properties.

The whole breast went fairly red but the nipple itself went almost black as though I'd been grilled and eventually the top layer of skin came away completely and a new layer grew underneath.

That was rather surprising and I did look as though I'd been under a grill. But it really wasn't all that sore, it was odd but it wasn't all that painful.
Previous Page
Next Page