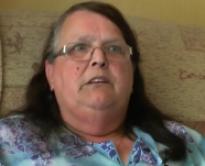 Age at interview: 64
Brief Outline: For several years, Jenny complained of pain and lack of shoulder movement. She was given cortisone injections but there was no improvement. She had shoulder surgery but she is still having shoulder pain. Pain is affecting her everyday life in many ways including sleep and overall mobility. She has arthritis and has had problems with her knees, hips and back. Before her shoulder surgery, she was already on long-term painkillers for her other health issues.
Background: Jenny is divorced and has three children, aged 39, 37 and 34 years old. She works full-time as a support worker. Ethnic background: White British.

For several years, Jenny complained of pain and lack of shoulder movement. She was given cortisone injections but there was no improvement. After a year, her physiotherapist referred her back to hospital. After an ultrasound test, she was diagnosed with impingement syndrome in both shoulders and a torn tendon in the right shoulder. The doctors again gave steroid injections in both shoulders but there was no improvement. Jenny had keyhole surgery in her right shoulder three months later. On the day of her surgery she was also injected with cortisone in her left shoulder.

The operation went well and Jenny did not have any pain when the anaesthetic wore off. However, two weeks after she returned home from hospital, she started experiencing severe pain. She was still having pain at the time of interview but was unsure whether it was due to her arthritis or a side effect of subacromial decompression surgery. She has arthritis that has affected her hips, spine and knees. She has had surgery for total knee replacement on both knees. She also has severe back problems and she has been under the care of the Pain Relief Unit since the early 1980’s. The painkillers she takes for her back haven’t helped with her shoulder pain. At her six week post-op assessment appointment, she saw the physiotherapist and was told that nerve problems are not uncommon following subacromial decompression surgery. Jenny felt disappointed because she said that at her pre-assessment meeting she was not told of this nerve problem as a possible side effect of surgery. The pain she is experiencing is affecting her everyday life in significant ways. For instance, she can’t lie in her bed and sleeps most of the night in an armchair, resulting in very little sleep and tiredness.

Jenny didn’t know until she got to hospital that she’d be seen by a physio. She wanted to see the surgeon and ask about surgery to her other shoulder.

Jenny didn’t know until she got to hospital that she’d be seen by a physio. She wanted to see the surgeon and ask about surgery to her other shoulder.

View topic summary
SHOW TEXT VERSION
PRINT TRANSCRIPT
Do you think you got enough information from them, from the doctor? From the nurse?

Oh yes, as far as the operation goes, yes. Everything was covered, yes.

But since I’ve had it, you know, as I say I’ve had no contact with a doctor to tell me or not whether they’re going to be doing the left one. They injected it while they was doing the operation on that one to take the pain away for as long as possible, but I don’t know if they’re now going to do it or whether they’re waiting to [sigh].....

Okay. So you just have to wait for an appointment?

To see a, okay. It just occurred to me when you went to see the physiotherapist, you were expecting to see the surgeon. Did you receive a letter saying that you are going to see a surgeon?

No, I just had a letter saying that I would be seeing [the physiotherapist] and I didn’t know what she was or who she was until I got there. You know, I just thought she was another one of the team of surgeons. But no, she was a leading physiotherapist or clinical practitioner, physio or someone. She’s high up whatever it is, you know. And it’s her I’ve got to go back and see, not the surgeon. So I don’t know where I stand as far as the second shoulder goes.

Did you ask, “Am I seeing the surgeon today?” or no?

Well I did tell her I was surprised I was not seeing him. I said I thought I would be seeing him and she said, “No, you come to me, when you come post-op.”

For post-op, you go to her?

Jenny has had problems since having surgery. She expected to go to work soon after the operation and is finding it hard to live on statutory sick pay.

Jenny has had problems since having surgery. She expected to go to work soon after the operation and is finding it hard to live on statutory sick pay.

Oh yeah, yeah. This is it because I’m only getting SSP [statutory sick pay] now, you know, and that’s nothing. So I’ve got to go to the council and council tax and rent and all this sort of thing because I haven’t got the money there to pay it. And you [upset] shouldn’t be put in this situation. It shouldn’t happen, you know. It’s not my fault that I’m ill and why should I struggle with finances because I have to go round and ask, you know, for help [upset].

It’s just a silly situation that the firm only pays you for so long and then you have to go on supplementary benefit and it’s peanuts, you know. It really is peanuts and you can’t live on it [upset].

Yeah, yeah. Any, and how is your, your, is your job secure? Will it be waiting for you?

Yeah, yes. Well they keep saying, “When am I coming back? you know, especially the people I support, you know, “Why’s Jenny not back yet? You know, because of course they can’t understand why, they just know that, you know, I’m not there to support them as I usually do.

Okay, so you need, it is affecting you also emotionally, I can see.

Sort of, kind of, yeah it is the shoulder but it’s the whole kind of,

Yeah, this is it. I expected at the end of three weeks to go back to work and everything would be hunky dory and it hasn’t been like that.

Because you are in pain?

Dealing with your nerves, kind of issue that doesn’t allow it. Okay, you were told that it might, it might be related to, it might be a side effect or a complication of....

It might, but they don’t know. This is the, nobody can pinpoint anything at the moment until I get this appointment through from the hospital and I don’t know when that will be. She is chasing it up - my doctor. But until somebody can pinpoint what the problem is so that we can do something about it, we’re just sitting here not being able to do anything. It’s just so frustrating. You know, it’s not what I expected.

Jenny expected to see the surgeon. She would have liked him to tell her what they’d done during surgery and whether her other shoulder needs surgery too.

Jenny expected to see the surgeon. She would have liked him to tell her what they’d done during surgery and whether her other shoulder needs surgery too.

View topic summary
SHOW TEXT VERSION
PRINT TRANSCRIPT
I was expecting to see the doctor, the surgeon, but I didn’t. I only saw [the physiotherapist] because they was on about doing the left hand shoulder as well. But now I don’t know if they are going to do it or whether they are thinking of doing it or what because nothing’s been said. But it needs doing. They know it needs doing. He’s agreed, he’s confirmed that one but if they’re going to do it, I don’t know.

Why were you expecting to see the surgeon?

Well, because he did the operation so he would have seen inside my shoulder and he could have explained to me, you know, what he’d seen and what they’d done and, you know, in wider terms.

And the person you saw, was she able to explain to you?

She explained what she thought had happened and she did get me into a position where we managed to lift my arm up with pillows and things under my shoulder. But it’s not easy to do that on yourself when you’re in bed [laughs], to try and relieve the pains. So consequently I’ve been getting very little sleep and I’m spending most of the night in the armchair because I just can’t lay with the pain.

For him to explain what...

Well, yeah and to find out when and if he was going to do the left one. So, you know, I’ve been left with a question now.

Doctors should tell patients more about the complications. Jenny is waiting for an appointment to find out why she’s having nerve problems.

Doctors should tell patients more about the complications. Jenny is waiting for an appointment to find out why she’s having nerve problems.

View topic summary
SHOW TEXT VERSION
PRINT TRANSCRIPT
It’s worthwhile having it. Yes, it does improve your situation providing you don’t get a problem afterwards. If it’s a straightforward operation, no problems. You know, there shouldn’t be any problems. We don’t know why this one’s occurred [nerve problem] but, you know, to be made aware that there could be a problem. Maybe it is one in a thousand, one in two thousand but it is a possibility that it might happen, then tell us. You know, at least you’d be prepared for it. You know, the fact that I don’t know what’s gone on and nobody seems to know either and I’m just hanging in limbo. It’s not good.

Waiting for an appointment?