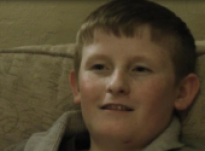 Age at interview: 14
Age at diagnosis: 12
Brief Outline: Leigh has enthesitis-related juvenile idiopathic arthritis. He experiences a 'really achy burning sort of pain' in his lower back, sacroil joints, knee and ankles. His mum gives him Humira (adalimumab) injections. Leigh trains in judo even though he has arthritis.
Background: Leigh is a school student and lives with his parents and brother. He is white British.

Leigh has enthesitis-related juvenile idiopathic arthritis. He experiences a “really achy burning sort of pain” in his lower back, sacroil joints, knee and ankles. He also experiences discomfort in hips. Leigh’s joints do not swell that often, even when he is in lots pain.
Leigh was on holiday with his family in Turkey. He fell of a banana boat into the sea. He then fell off a running machine that was in the hotel gym. He was also thrown awkwardly into the pool. He woke up one night in excruciating pain and could not move properly. His parents thought he had an ear infection and went to the local pharmacy. When Leigh returned to the UK he went camping but had difficulties walking. His parents took him to see a doctor and discovered that he had lots of fluid on his hip joint. He stayed in hospital for about a week and had various tests were done but nothing was found. Leigh then visited different GPs to get to the bottom of the problem. One GP was concerned that he may have something serious and referred him to the hospital. After several x-rays and an MRI scan Leigh was diagnosed with arthritis. It took about 18-24 months to get a diagnosis.
Leigh takes Humira at home. His mum injects him once every two weeks. Leigh also trains in Judo. Leigh has learned to roll properly in Judo and this helps avoid serious injury. Leigh enjoys playing rugby but he has difficulties running. He finds that the cold weather hurts his joints but the pain goes down after a hot bath. When Leigh is old enough he would like to become a prison officer.
When Leigh was very young he always complained about his legs hurting and would never walk far without having to be carried or sit in a pushchair. His parents put this down to laziness but with hindsight it could possibly have been a symptom of the arthritis.

Leigh was not given many instructions during his tests.

Leigh was not given many instructions during his tests.

They just; I think they had something as well to do with waves, like some weird wave thing and yeah, but you normally have x-rays for like broken things so that's why I was wondering why am I in here because I haven't broken my hip and . So everyone else is like in casts and that so I thought oh well, I thought that they were just for broken things. They didn't really explain to you, they just go, "OK you're going for an x-ray, you're going for an MRI." They don't go, "Right what you do, you sit down, you lay back, they're going to put something over you, they're going to put boards underneath you, they're going to move this light around, your laser on your leg." They just go you in the MRI scan and then they leave you to go with a doctor or the person that pushes you around and they push you to the thing and yeah.

When Leigh went for an MRI scan he had to lie still and listen to music. He said it sounded like...

When Leigh went for an MRI scan he had to lie still and listen to music. He said it sounded like...

View topic summary
SHOW TEXT VERSION
PRINT TRANSCRIPT
When it comes to the MRI did they tell you what was going on and why?
No. All I really remember is so noisy and I had to sit on the bed for half an hour listening to music behind loads of windows in glass and whatever, it was a full body one. Yeah that's all I really remember, I just remember it was like a tube, felt like I was going in like the Tardis or something because the noises.
What did it feel like?
I couldn't feel anything but they said there was something out on the lines of not nuclears, something like some waves that go through your body from this tube where you have to lay on the bed and it shoots. Yeah and there's some waves that were going round the room, that's why they had mirrors and glass, yeah.
And did the people tell you what was happening during the MRI? Did they talk to you at all?
No I couldn't hear them.
And before the MRI did they explain what they were going to do?
I didn't really know, no. They were just like , "You're going for an MRI scan," and if I was at home I would have like researched it up and that on the internet but I didn't have a clue really what it was until I got to the room in the wheelchair, looked at the MRI and I though whoa, it's like a huge machine And they were all like, "Don't move," and there's about five doctors and a couple of nurses, they were all like, "Make sure you don't move, listen to your music, don't take it off," and I was just like yeah and then I went into the tube and couldn't feel anything and that I think was even worse when I came out because I had to like lay on the bed, a wooden, well it weren't wooden, the thick plastic, not even cushioned or anything. Yeah I listened to some rubbish music.
Was it painful then laying down still on these beds?
Yeah
Yeah?
It always is in like assemblies and that. All wooden and cloth chairs but they don’t; Miss said that she'll email around the school again telling them that about how the arthritis, because we hate to be. I can never like sit on a chair for ages and they think I'm just fidgety but it's not always because of that it's just because I need to move. Because if I don't move then I'll be like stuck really.
Previous Page
Next Page