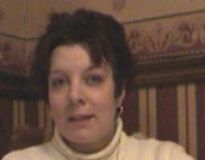 At a scan at 8 months she learned that her baby's brain was partially formed and the prognosis...

At a scan at 8 months she learned that her baby's brain was partially formed and the prognosis...

View topic summary
SHOW TEXT VERSION
PRINT TRANSCRIPT
Because I've been for many scans before, every time I'd been I always ask for a picture. She was very silent as she was doing it, and I asked for a picture and she said I couldn't have one. And she carried on and she was, she still didn't say anything to me, and then she said, 'I'll just go and get the consultant'.

And we waited for about ten minutes, and the consultant came down and she came with him, and then she discussed something with him, which she wasn't talking to me, she was just telling him. And then he started to scan me, and he scanned me for a good twenty minutes. And as he was scanning me he said, 'She's picked something up, that she's asked me to investigate a bit further'.

But he didn't tell me what they'd picked up until he'd finished scanning me, and that's when he told me the whole thing really. And I said, 'Well, what would your opinion be?', and he said his opinion would be a termination. His exact words, 'The prognosis I give for this child is appalling', because he said she wouldn't survive. But he proved wrong, she proved him wrong.

And would you have liked them to talk through things as they were doing it?

I would, yeah. I would like them to explain what they're doing, what they're looking at. They use a lot of the time technical jargon that I just, you just don't understand. And they were just talking to one another as if I was invisible, and as if they were just using my belly just to look at a picture.

And as I say that twenty minutes, because he said he was, he'd been told to look at something - he didn't tell me what or where he was looking - and it's twenty minutes that I had to endure him looking at my belly, scanning me, then for him to tell me the prognosis.

She wanted to keep the baby, although she was advised to have a termination. She felt at 8 months...

She wanted to keep the baby, although she was advised to have a termination. She felt at 8 months...

View topic summary
SHOW TEXT VERSION
PRINT TRANSCRIPT
No, no. I couldn't have gone through it at that, at eight months pregnant. As I say, if I would have found out sooner, then it might have been different, but not at eight months, no, no. And I wouldn't have seen it as like a stillbirth anyway. I just think it's torture to put any woman through that - to even think of putting them through that, to be honest.

They just give you maximum half an hour to think whether you want to terminate your pregnancy or not at eight months, and then you have to give birth to the baby in twenty-four hours time, and then you're sent home on your way. I think it's, I just think it's evil, to be honest.

You said he [the consultant] wasn't very sympathetic?

No, he wasn't very sympathetic at all, he was, he just basically, he told me a bit of jargon and I asked him to tell me in English. And he basically said that, 'She only has half a brain and the other half is a cyst which is putting pressure on the other half of the brain, which means that it could stop her oxygen supply to her brain which then', he said, 'that will make her even more severely handicapped', if she pulled through it. And he just said, you know, 'My recommendation is that you have a termination', and that was it.

You didn't talk to anybody else. Were you offered anybody else to talk to for counselling?

No, no, nothing at all. Not at that stage, no. I suppose I would have been offered counselling if I'd decided to go through with the termination. But that was all we were offered was a termination, and he came back and I said, 'No' again.

The hospital recommended a natural delivery, but she felt a caesarean would be better for the baby.

The hospital recommended a natural delivery, but she felt a caesarean would be better for the baby.

View topic summary
SHOW TEXT VERSION
PRINT TRANSCRIPT
And they insisted that I went for a natural birth, which I had sort of four weeks to go and they wanted me to wait four weeks, and I said I wanted a caesarean as soon as possible. And they said that with the prognosis that they'd given me for her, they just didn't stand much of a, they didn't think, they didn't really give her a chance, and they said that having a natural birth wouldn't hurt her any more than what she is anyway. But they did, they booked me in for a caesarean the week after, so I had a week.

Because you pressed for it?

What kind of support did you get from your GP and midwife at this point?

My midwife was very good. She was always popping in and different things. And on the day that I actually had, I actually had to go in on the morning, my midwife came to see me. And then once I came out of theatre she actually came down and saw me again.

And she actually bought me some pictures down of her, because I could only see her for a quick minute before they whisked her off. But my doctor was very good as well, he was very good. Otherwise I think the support I got off my GP and my midwife and my health visitor, that was very good.

If she had discovered her daughter's condition earlier in pregnancy, she would at least have had...

If she had discovered her daughter's condition earlier in pregnancy, she would at least have had...

View topic summary
SHOW TEXT VERSION
PRINT TRANSCRIPT
If you'd found out at the twenty-week scan, what would you have thought then about termination?

I don't really know. I suppose I would have thought long and hard about it, because I'd been through so much with [daughter] when I was pregnant. I was bleeding heavily and I used to have constant pains and different things, but she was still there as such, so that's why I carried on with the pregnancy and I had her.

I don't know how things would have been if we'd have found out. I suppose in one way I would have carried on having her, but at least it would have given me more time to get used to the idea and been able to prepare myself. Whereas I only had one week to prepare myself, from finding out to having her. And as soon as I had her she was rushed away to Intensive Care on oxygen and different things, and I couldn't see her for another two days after that, but I don't know.

She felt screening was not effective in her case. She would have screening again another time but...

She felt screening was not effective in her case. She would have screening again another time but...

That's interesting. So even though you don't trust it, I mean, it kind of gave you false reassurance?

It gave me, yeah. I just, it gave me false reassurance, because I had a very bad, a very bad story to tell, really, due to screening. But I just don't think anyway that pregnant ladies are screened enough. They have about three scans from when they find out that they're pregnant to before they give birth, and a lot can happen in them months - the last time they're scanned and from when they give birth a lot can happen. And I just think that pregnant women should be screened more. If they want to be screened more, I think it should be there for them to be screened more.

Would you yourself have screening again?

But with a heavy heart?

But I would, I don't think I'd trust it again. I'd have the screening done, but in the back of my mind it's always going to be there now - 'Is there something wrong?' I'm always going to be worrying until I've actually given birth, until I can see for myself, because until then I just wouldn't trust it. It'd just always be in the back of my mind, 'What if?' all the time. Which that should really be there to stop pregnant women worrying, but it wouldn't stop me worrying, at all.

Having her daughter has made her less selfish, but looking after her is very tiring. Uncertainty...

Having her daughter has made her less selfish, but looking after her is very tiring. Uncertainty...

View topic summary
SHOW TEXT VERSION
PRINT TRANSCRIPT
It just amazes me sometimes that what she's been through and she's fifteen months old and she still laughs and giggles and, you know - I moan at having something like a headache and [daughter]'s had that many brain operations and different things, and she always comes up brilliantly. She's just brought, as I say, she's, I'm just not as selfish now I've had her.

On a day to day basis it's very hard. Because of the problems she suffers with sometimes you don't know whether she's crying because of the condition, or because it's just a general baby problem, so you have to go through the whole thing of, 'Could it be this? Could it be that?' all the time. When she wakes up, she screams and screams, and it's due to the head problems that she's got.

She has what they call night terrors, and she screams and screams, and it takes about half an hour to comfort her, so nobody has ever had her overnight, and nobody's ever had her for a couple of hours to take her out except my partner, and that's it.

I think everybody thinks that, 'Just wrap her up in cotton wool', but that's the last thing she needs. But otherwise she's, the day to day is, night time's the worst because she doesn't sleep. She has about a maximum of fifteen minutes a day and then she seems to be like she's had twelve hours sleep. And she wakes up about between six and seven times a night, so I'm usually very tired and my partner he works full time, so he doesn't, he's up very early in the morning, so he can't have her through the night so.

How has it affected your relationship? It must have put a bit of a strain on...?

Our relationship, he's, we no longer live together no more, due to the strain of everything really, I suppose. He's here I suppose more times, he spends more time with [daughter] now and with the elder child, because he just comes and does what he does.

But it has put a big strain on our relationship, it did do. It was just the question of not knowing that's the most difficult thing. If somebody could write it down in black and white for you it would be okay. At least you'd be able to get used to the idea. But they can't, they can't give you nothing at all. It's just time. So that's why I have to take day by day as it comes, because she is in, she's poorly a lot of the time, and she's admitted into hospital a lot of the time. So I think my older child suffers a lot from that.