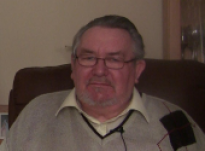 Age at interview: 67
Age at diagnosis: 64
Brief Outline: When Malcolm had his stroke he initially thought that he was having an angina attack. Malcolm has other health conditions including angina, diabetes, epilepsy, sleep apnoea, and is registered blind.
Background: Malcolm is a retired transport manager. His ethnic background is White British.

Malcolm is a 67 year old retired transport manager. He had a stroke three years prior at age 64. When he had his stroke he was at home with his wife and initially mistook his symptoms for an angina attack. An ambulance was called and he was admitted to hospital. Shortly after admission he was seen by a GP and was informed that he had a stroke. Six months passed before he was discharged home. The stroke affected his right side, leaving his right leg paralyzed and his right arm with limited function. He now uses a wheel chair and has moved into a bungalow (more suitable for his functional needs).
Malcolm has several other health conditions including angina, diabetes, epilepsy, sleep apnoea, and is registered blind. He was diagnosed with epilepsy and diabetes in the years following his stroke. His impairments in mobility and sight are also consequences of his stroke.
Before he had the stroke, Malcolm had very little knowledge of the disease and was of the mind-set that it would never happen to him. Although the stroke completely changed his life Malcolm acknowledges that it is important to stay positive and “solider on.” He misses some of the activities that he used to do before the stroke (e.g., paint, write, and go for walks) but has learned to adapt (e.g., writing with his other hand). Having things to look forward to helps in his recovery (e.g., the birth of a grandchild and more recently the delivery of a new car which will provide more opportunities to get out of the house).
Malcolm is extremely grateful for the on-going support that he receives from his wife and family. Malcolm’s wife assists him with all activities of daily living (bathing, mobility) and has taken on tasks (e.g., painting) that originally used to be completed by him. He acknowledges that it’s hard to see his wife do things that he used to do as the “man of the house” and worries about the strain that his needs might place on her. Despite these hardships, Malcolm notes that the stroke has brought them closer together and has made their love for each other stronger.
In terms of formal support, he receives care (on an infrequent/ as needed basis) from a district nurse, and home visits from an optician. Malcolm describes him and his wife as independent people and prefers not to have outside help. His wife does not receive caregiver allowance since Malcolm’s pension is over the required eligibility threshold.
His message to health care professionals is to listen to the patient and take time to explain things properly and thoroughly. This message stems from a positive experience that he had with a health care provider. He is grateful for this positive health encounter but feels that it was not representative of the norm. His message to other people with stroke is not to let it get you down and embrace family (social) support.

Malcolm experienced pains in his chest and was sweating. He assumed that he was having an angina...

Malcolm experienced pains in his chest and was sweating. He assumed that he was having an angina...

View topic summary
SHOW TEXT VERSION
PRINT TRANSCRIPT
Malcolm' It started actually on the 18th of November, 2007, which was a Sunday, which was a Sunday. I felt a little bit unwell, sweating and I couldn’t, I couldn’t move properly. But I do suffer from angina and we thought it was an angina attack. So we called an ambulance. And first on the scene was the the emergency paramedic in a car, who came in and examined me and said that there was something wrong. But he didn’t know exactly what. So then an ambulance came as well. So they put the ECG on me and did my reflexes, and my temperature. And they, they then blue lighted me to hospital. I went into hospital into A&E and they were examining me in A&E. They examined me in A&E, took some blood counts. And then I was admitted to the ... it’s like a ward where you go when you, when you actually go into hospital and then they decide to what department you will go to.
Malcolm' I knew I was having a… as far as I was concerned I thought I was having…
Wife' It’s angina.
Malcolm'..an angina attack. Because I was getting the pain in my chest.
Right, right.
Malcolm' And that’s when the emergency paramedic, you know they drive around in the cars. They, he, they called him out first. And while he was with me… the ambulance came then. And they just put me in the ambulance and blue lighted me to the hospital.

Malcolm talks about his various health conditions, and how they have impacted his life.

Malcolm talks about his various health conditions, and how they have impacted his life.

View topic summary
SHOW TEXT VERSION
PRINT TRANSCRIPT
I lost the use of my right, my right leg. My right leg is completely gone. I can’t feel it. I can’t move it. I can’t, I can’t do nothing with it. My right arm, I can move just a little bit not too much but just a little bit. And through the stroke itself I’ve developed diabetes. I’m now a diabetic which I wasn’t before. I also suffer with epileptic seizures as well, which can just come on at anytime. I don’t know when they’re’ coming on. Afterwards I can’t remember anything. I’m very tired. I’m very tired when I’ve had my, had a seizure. I’ve got to go to bed. The other thing is that I have as well what you call sleep apnoea, which is an illness where periodically while you’re sleeping you stop breathing. And it can be fatal, if not treated you can die from it. And I wear, for this I wear a face mask, a full face mask, when I’m, when I’m sleeping at night and I have done for the last nine years. So I’ve got that to contend with as well.
Yeah the, the other thing I forgot to mention Kerry was that since I’ve had my stroke, my eyesight has deteriorated to the point, where our local eye hospital has registered me blind now. So I am registered blind. I carry a card to that effect. So all and all the stroke has up, well upset our lives a little bit. But what we tend to do is we don’t, well we try not to let it get on top of us.

Malcolm says, Ive had a stroke but Im not stupid.

Malcolm says, Ive had a stroke but Im not stupid.

View topic summary
SHOW TEXT VERSION
PRINT TRANSCRIPT
Malcolm' My message to the healthcare professionals and the doctors is listen to the patient, listen to the patient because the patients knows what’s happening inside him, at least I do. And you know just take the time just to sit down with them for five or ten minutes, and just have an in-depth chat with them. And also explain to them what is going on. Explain to them what’s happening because I find if one knows what’s going on, if one knows what’s wrong, they can manage it better. Don’t try to you know say, “Oh well this will be all right and that will be all right.” Just to sit down with the patient and just have an open deep thorough chat with them. And just let them know what’s happening. Don’t try to bull them, as we say.
Wife' All they can say to him is, “Ooh you’ve out a lot of weight on.” Surely he has but he can’t, he’s not moving. He’s not mobile. – take out this line whole line
Malcolm' That that annoys me. And, and, and I know I’m putting weight on you know. I always say to them, “I’ve had a stroke but I’m not stupid.” That’s what I say to them. I say that to them, “I’ve had a stroke but I’m not stupid.” I know I’m putting weight on obviously I’m not moving properly. But at the same time I’m trying to eat reasonably well. So I’m not putting all that much weight on. I know what I’m eating. What I can do with the doctors that come in, the health professionals or the physiotherapists or the occupational therapists, and say, “Oh yeah, yeah that’ll do, yeah we’ll see you.” Just say what, what’s going on.
Previous Page
Next Page