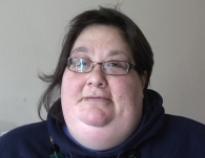 Age at interview: 41
Brief Outline: Fenella became a PPI representative after taking part in a research project. She works with a local Mental Health Research Network and has been involved in designing and planning research proposals.
Background: Fenella is single and works as a clinical audit assistant in a mental health NHS trust. Ethnic background: White South African

Fenella became involved in PPI in research after taking part in a randomised trial comparing partial hospitalisation with standard community treatment for a mental health condition. When her psychiatrist told her about a paper he had published based on the results of the research she said, “I felt quite touched that I was part of that process to help inform about a treatment”. This experience and her psychiatrist’s active involvement in clinical research inspired her to become involved in PPI. She was fascinated by research and said she “wanted to be part of that buzz”. She contacted the Mental Health Research Network (MHRN) and offered to become a PPI representative. Although Fenella is aware that lay involvement in research is important in ensuring it gets funded, she didn’t feel this was the main reason the MHRN involved her.

Since she joined the MHRN, Fenella has been involved in numerous aspects of the research process. As well as helping to plan research grant applications she had the opportunity to develop her own idea for a research project. The researchers she was working with supported her ideas and they worked together to prepare a proposal. Unfortunately, the project was not approved for funding. She was disappointed, but was reassured by the research team that they would try again. She feels her contributions have been valued by researchers and that her input isn’t seen as tokenistic.

After her experience of participating in a trial, Fenella is keen to encourage researchers to share the outcomes of their studies with participants. She thinks it is important that the results are communicated in accessible language and for participants to have an opportunity to ask questions. She is a strong advocate for more research into mental health treatments, especially non-drug interventions such as cognitive behavioural therapy and computerized support packages. She is experienced in PPI representation in research on personality disorders, eating disorders and psychological therapies. She has also been invited to help out with some schizophrenia research. Her advice to other people is to find out what research is going on locally and think about taking part if possible. Trials are in her view crucial for developing new treatments and making sure they work. Her message to professionals is that research is exciting, and that if they are not involved they should be.

Fenella developed her own research proposal with the Mental Health Research Network, which was shortlisted for funding. They’ll try again.

Fenella developed her own research proposal with the Mental Health Research Network, which was shortlisted for funding. They’ll try again.

View topic summary
SHOW TEXT VERSION
PRINT TRANSCRIPT
I’ve even, I even thought up my own proposal for a research project, which got a whole team together. And I sat in this room with all these academics. I could not believe it. There must have been about seven or eight psychiatrists all sitting in a room, and with a statistician and everyone, and all sitting there. And I’m sitting there thinking, “Wow.”

And I said to the one psychiatrist, “I’m thoroughly embarrassed. I’ve got you all here for half the day.” And the one psychiatrist said, “No, I think this is absolutely wonderful.” And we got actually shortlisted on one of them, but then we didn’t get past shortlisting. And I was really, really upset. And I remember the one researcher who had put the proposal together said, “Oh” he said, “Don’t worry.” He said, “Research for Patient Benefit will be here for years, so we can keep trying.” And I just thought [laughs], you know, it was just so lovely the way he said that and kind of, you know. And so it’s on the back burner. But we haven’t finished yet. So, you know, so for as long as, as the Institute for Health Research will be there, my proposal will be on the back burner. So that was lovely. And also I go on courses and stuff and I’m encouraged to do training and, you know, I help out on stuff. And I do have my own specialist area, which is around personality disorders and eating disorders. However - and psychological therapies - however I recently was approached by a professor who specialises in schizophrenia research, and it was quite nice to be asked to, to help out on that. And that wasn’t tokenistic because he was applying for money, but he genuinely wanted my advice knowing that I worked with other mental health service users. And it was really nice, you know, and it, it was a nice feeling. And I also went away and learnt more. And I also got given a great big textbook as well. So it was great.

Fenella got involved in research through her consultant psychiatrist’s research activities. She has felt welcomed and valued.

Fenella got involved in research through her consultant psychiatrist’s research activities. She has felt welcomed and valued.

View topic summary
SHOW TEXT VERSION
PRINT TRANSCRIPT
Something I was going to ask you a while back when you were talking about the Mental Health Research Network. Was it your experience with the trial that kind of inspired you to get involved in that?

Yes, it was actually. My, it was basically because my psychiatrist was very active in clinical research. He was always writing papers and doing presentations and stuff. And I wanted to be part of that buzz. I would go to a lecture or something and think, “Wow, this is really interesting” because a lot of research had gone into stuff and it fascinated me. So basically I found out a bit more about it, and I made some contact. And it was really nice getting in touch with my local office. I was welcomed in. I wasn’t treated as, “Oh, you know, you’re not important” or anything. Because in actual fact now, basically the way governance arrangements are around research is that you have to have obviously service user involvement. So, and they didn’t just accept me because they knew they had to involve me to get their funding - because I know that that happens, where clinicians say, “Here, sign here. Fill in that box. Then I can get my money” you know [laughs] , type thing. I’ve heard that happen, I’ve heard where people have been taken out for dinner and, you know. It rarely happens now. But we are still having a bit of tokenism, though, where actually the meaningful involvement is still not quite there. However, I was fully, fully involved and, you know, and I’ve got my place within the department.
Previous Page
Next Page