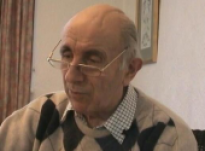 Age at interview: 75
Age at diagnosis: 67
Brief Outline: John's symptoms started in 1999. He now has difficulty getting dressed and he is slower with walking, but he is grateful that his symptoms have progressed slowly.
Background: Married, 2 adult children, retired scientist.

In 1999, John’s handwriting was getting very small and he noticed his legs were becoming weak and his arms were stiff. He saw a neurologist who sent him for an MRI scan which took place three months later. The neurologist prescribed Sinemet which caused a noticeable improvement in the stiffness in his arms, and John was diagnosed with Parkinson’s Disease. In 2005, John also started taking Ropinirole, which made him sleepy.

Getting out of bed and turning in bed has become increasingly difficult and he now uses a cord which he attaches to one leg of the bed, which helps him to move more easily. He is now slower at dressing and at walking, but he is grateful that his symptoms have progressed slowly.

He would like to see more data collection taking place of the medication that other people with Parkinson’s disease are taking.

John and Julie advise others who are newly diagnosed not to panic or get too worried because their symptoms may progress slowly and the medication that is available works very well.

John had made a record of his feelings about Ropinirole which had been added to the Sinemet he...

Show in context
SHOW TEXT VERSION
PRINT TRANSCRIPT
John' And then November a year later. November 2005, a new prescription was imposed, prescribed Ropinirole. I seem to remember saying that it didn’t make much difference if any.
Julie' It made you sleepy.
John' Oh, sleepiness, you’re quite right. So that brings us to the 27th February of ‘06. We have no comment there have we. Oh yes I have a little essay or set of points by myself headed, ‘Conditions changed since increasing Ropinirole dosage’. Firstly very noticeable increase in sleepiness, especially when in front of television. This is a comment on the programmes we get. This is a new phenomenon. Similarly when reading at any time which is absolutely abnormal for me. I always read in bed to all hours. But now I can do about three quarters of an hour. Increasing dizziness, especially when I get out of bed in the morning. This did not happen before taking the larger doses of Ropinirole. Walking is not as unsteady as it used to be. Of course the notes about the effect of Ropinirole mentioned account of the above symptoms, but why should we put up with them? What beneficial effects of Ropinirole, if any? Do we need such large doses? 9 mgs a day? I would be more comfortable on 4 mgs maximum. But actually nowadays I do take three times three millgrammes.

John has problems turning over in bed. Julie has to give him some help with dressing.

Show in context
SHOW TEXT VERSION
PRINT TRANSCRIPT
John' Yes. Yes. We’ve put a sort of cord attached to one leg of the bed and brought it over onto the mattress and I attempt to pull myself around. It is not much of an improvement. It is these, what do you call the cover on the bed?
Duvet?
John' Duvet. Yes good old French word, I should know that. Anyway the duvet tends to impede your turning around. Because you carry it with you and it brings cold air onto you. So actually it is …
Julie' And taking off jumpers.
John' Oh yes. Dressing is a big context in which I am slow. I take what? Twenty minutes I suppose to get dressed or undressed. We tend to have a procedure where Julie rolls up my jumper …
Julie' That is all I have to do for you really. Just help him with the dressing.
John' Yes.

John was not convinced that his urgency was just caused by PD. But reaching the toilet in time...

Show in context
SHOW TEXT VERSION
PRINT TRANSCRIPT
Julie' That is another symptom that you probably didn’t mention. I don’t know if you want to go into details about that.
John' What is that?
Julie' Well because of the frequency that you need to go to the toilet and because you are very slow at undoing various clothes, sometimes we have accidents and that is due to the Parkinson’s because you can’t you know get to the toilet quickly enough.
John' Well no, I wouldn’t say it was due to the Parkinson’s. It is due to the prostate.
Julie' Well it is the two together isn’t it. It is the two together.
Have you had any of your clothes adapted in any way?
Julie' Yes. I have cut his shirts like this so he doesn’t have to fumble with the shirts. Cut that away.
John' That works very well. I mean we are being over dramatic. I mean it is a question of going to the lavatory three times during the night. I don’t know any male who doesn’t do it.
Julie' That is right, everybody seems to be …
John' Without Parkinsons.
Julie' Yes.
John' So I think we have done reasonably well to control that.
Julie' So I cut away the shirts and we shortened the vests.
Previous Page
Next Page