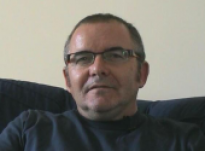 Age at interview: 58
Age at diagnosis: 49
Brief Outline: Alun was diagnosed nine years ago. Physically, his mobility is most affected now. He has experienced obsessive compulsive disorder from the medication he has taken.
Background: Married, 2 adult children, retired Teacher. Chairman of the young person's network.

Alun’s early symptoms were difficulty using his hand to write on the board at school, to shake salt, clean his teeth and use the mouse on the computer. He also noticed that he was limping, his balance was affected and had a stiff shoulder. Alun was prescribed Sinemet and also an anti-depressant and he managed to keep working as a school teacher for another two years after he was diagnosed. He was becoming very tired so he decided to leave teaching. He had difficulty getting the necessary arrangements made so that he could leave work and still receive his pension fund, but after a struggle he was able to do this.

He felt quite negative and depressed for a couple of years but then he decided to turn his life around and be positive. The first action he took was to get in contact with his local Young Person’s Parkinson’s disease group. He is now chairman of the national Young Person’s Network and gives talks nationally and internationally. He has done a great deal of fundraising for the Parkinson’s Disease Society over the last few years, which has involved him walking up mountains, which he says gives him an aim in life and keep his mind off his own symptoms. He copes with Parkinson’s through humour and by making things fun.

Alun’s biggest problem now is walking. He finds it extremely uncomfortable to walk at times, his balance is sometimes affected and he has a feeling that he will fall over.

Alun has taken several different types of medication over the years. Each time the medication has lasted for about two years and then he has needed to change to a different type. He now takes Madopar and Ropinirole. He stopped taking Selegiline recently because he was experiencing obsessive compulsive behaviour as a side effect of the drugs. But coming off this medication didn’t make any difference and only made him feel more ill. He says that dealing with the emotional aspects of Parkinson’s is much harder than dealing with the physical aspects.

Alun tries not to get stressed with things because stress makes his symptoms worse. He advises others to find something that they can aim for, whether it be a task to do daily, weekly or monthly. The important thing, he feels, is to have something else to focus on rather than Parkinson’s Disease.

As his symptoms become more difficult to treat Alun has found it hard not to give in to...

Show in context
SHOW TEXT VERSION
PRINT TRANSCRIPT
It’s slowly progressed over the years but it’s been this last year that has been the most difficult. When I changed drugs, from one sort of Parkinson’s drug to another and stopped taking the anti-depressants, I really went downhill and I haven’t actually recovered since. The walking is bad. I sometimes get more depressed, in fact in January when I was feeling very low I was lying on the carpet at night, unable to get comfortable and I just felt like dying. So I went to the doctor and got some happy pills and I’m okay again now. I don’t have those thoughts any more, but it was a bad time for me.

Alun is not prepared to blame a pesticide when his wife and he were both equally exposed to it.

Show in context
SHOW TEXT VERSION
PRINT TRANSCRIPT
Never thought about it, no because it’s happened, there’s no going back. There’s no point worrying about what it might have been. My wife has theories like it was glandular fever, or pesticides, because we stayed with our friends once and they had woodworm. And they had painted all the wood with a chemical and we were sleeping in that room. But then my wife hasn’t got Parkinson’s so I don’t believe that.
I don’t worry about what’s caused it. I just think what would, what sort of cure would I like. If I could be cured and stop now that would almost be satisfactory. If I could take it back a year or two, I’d be quite happy with that, so it all depends whether the cures can stop it, roll it back or prevent it.

Alun finds his compulsive symptoms harder to explain than his Parkinsons but was relieved to...

Show in context
SHOW TEXT VERSION
PRINT TRANSCRIPT
So this last year’s been the hardest part?
Oh yes, undoubtedly, because of not just physical problems, but mental problems as well. Feeling depressed, feeling compelled to do things. Feeling low, it’s been very difficult. Because although people associate Parkinson’s with physical problems the mental problems are more difficult to deal with, because like you can rationalise why you’re walking along funnily. But thoughts that you have or compulsions that you have, you can’t understand where they’re coming from.
So it’s much more difficult to deal with and there’s not been much research or much help given to coping with these problems and it’s partially the drugs. Like I was a compulsive person anyway because I had the book of lists one, book of lists two. Book of lists three, book of lists four, and I bought every CD by Eric Clapton. And so I’ve always been a bit compulsive like that, but this has sort of magnified it in different areas.
I’ve spoken to my specialist about it, which was a bit embarrassing because there was a student pharmacist and a student doctor in the room at the same time. And I had to explain what the problem was. He suggested I come off some drugs but that has actually made me worse, not in the compulsive disorder but physically worse. The best person who gave me the most support was a friend who’s husband’s got Parkinson’s who went through the same problems that I’ve had, and she told me in great detail what had happened and I didn’t feel so bad after that. So it was somebody who had cared with somebody with Parkinson’s rather than somebody in the medical profession. Because somebody who cares for somebody with Parkinson’s sees it twenty-four seven, whereas doctors don’t.

Alun could put his mind at rest over many issues by contacting the nurse.

Show in context
SHOW TEXT VERSION
PRINT TRANSCRIPT
The other person who has been a great help has been the local Parkinson’s Disease Nurse Specialist and she’s very accessible. I can ring her up and if she’s in the office I can go and see her almost immediately and she’ll talk over problems with me, suggest solutions and I feel much happier when I’ve seen her. Whereas to see my specialist in [town], although they have an open access appointment system so I can turn up on a Wednesday when they hold their clinic and see him at some point, it’s not as convenient as ringing up my Parkinson’s Nurse. I’m quite happy with the National Health Service what they’ve done for me and my Parkinson’s.
Previous Page
Next Page