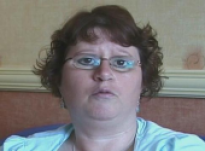 Age at interview: 49
Age at diagnosis: 42
Brief Outline: After Gina was put on Ropinerole she started gambling on the internet and lost large sums of money. There was no indication at that time on the leaflet that came with the medication that gambling might be a problem.
Background: Trademark formalities assistant. Married, 2 children.

Gina consulted her doctor when her right arm started ‘bouncing about’. She thought it could be repetitive strain syndrome. When she learned that she had Parkinson’s disease she had no idea what it was but was afraid it was something like Leukaemia and that she might not have long to live. Her consultant was not reassuring and told her that her symptoms were sure to get worse. As she learnt more she became more reconciled to this not being the worst thing that could happen to her.

Having asked to be taken off Cabergoline which had been prescribed because she had read there was a 1 in1000 chance of organ damage from these tablets, she was put on Ropinerole. She became involved in gambling initially just Bingo. When 3 months later at the hospital she was asked if she had noticed any unusual behaviour she said ‘only a bit of bingo’. There was, she says, nothing at that time in the  leaflet that came with the medication to indicate that gambling and other compulsive behaviours were recognized  side effects of this medication. Unfortunately due to staff shortages at the hospital her next appointment was not for a whole year by which time she had lost in excess of £75,000 and concerned that she could  to lose her house. Only then did she discover that her compulsive behaviour had been caused by her medication. Once she came off Ropinerole, the need to gamble disappeared completely within weeks but she and her husband are stuck with their desperate financial position.

Gina didn’t initially want everyone at her work to know about her PD, mainly because she didn’t want to be treated differently. Now that they know it is not a problem. Although she told her sons quite early on and one of them helped her look the condition up on the internet she feels they don’t really understand the implications of her condition. Her husband who is Portuguese and has worked nights for many years has supported her through the financial catastrophe which has hit them as a result of her illness. Both of them have taken on extra work to try to make up for their losses.

Gina says if you saw her in the street now, 7 years after her intital diagnosis, you might not realize she had PD. It shows more when she is excited or upset and she has to hold on to her arm to conceal the shaking. She still walks several miles a day on her way to work.

She takes Amantadine as well as Sinemet.

Gina, who knew nothing about Parkinsons disease at the time of her diagnosis went away confused...

Gina, who knew nothing about Parkinsons disease at the time of her diagnosis went away confused...

View topic summary
SHOW TEXT VERSION
PRINT TRANSCRIPT
I was unfortunately seeing a neurologist that was on his day of leaving. He was leaving that hospital, moving to another hospital. And he just, he examined me and came and said, “Oh, you’ve got Parkinson’s.” And I said, “Pardon.” He said, “You’ve got Parkinson’s.” I said, “Well, what’s that?” And he said, “It’s a, not a disease, a condition where a certain chemical isn’t going to your brain. It’s not making enough chemical going to your brain.” So I said, “Oh.” And I, I was a bit in shock. Because I, I’ve heard the word Parkinson’s and I thought of Michael J Fox. I’ve seen him on the TV. I thought, “Well, he, he had Parkinson’s. And Cassius Clay, I think he, he had Parkinson’s.” I still wasn’t quite sure what it was. And he just said, “Yea, you’ve got it.” And I said, “Well, can I have a second opinion, please? Because I’m not . . .” The way he spoke to me, I was in quite a, a state of shock. And he said, “Well, you can come back in a couple of months’ time when the lady who’s taking over from me will examine you as well.”
So when I went back in the April, I said to the, this new neurologist, “Is there any chance that for the next twenty years that I won’t get any worse?” She said, “Oh, no, you will definitely get worse.”  And I thought, “Oh, God.”  And all that I could do was cry, because I thought, “Well, I really don’t know what this is.” And I just come in and I just burst out crying.
... You might find this odd, when he, when he said Parkinson’s, I was thinking of leukaemia and that type of thing. And I, I thought, “Oh, does that mean I’m going to die? Or, you know, will this thing take over my whole, whole body? And will my husband have to look after me?” I, I just, I, I didn’t know what, what it was.

Gina was put off when she offered to donate her eggs.

Gina was put off when she offered to donate her eggs.

View topic summary
SHOW TEXT VERSION
PRINT TRANSCRIPT
I did, I, actually when it first came out I off-, because I was a bit younger, I offered them some of my eggs. I said, “You can have some of my eggs.” And they said, “It’s all pie in the sky. It’s, it’s, doesn’t work like that. It takes years to research these things.” They could, you see all these things on the TV. There’s, they think they’ve got a cure for this, they’ve got a cure for that, and it’s all just, it’s, it’s not ready. You’ve got to wait years. So, but I am quite interested in it.

Ginas doctor asked if she had noticed anything unusual like gambling but she denied it. By the...

Ginas doctor asked if she had noticed anything unusual like gambling but she denied it. By the...

View topic summary
SHOW TEXT VERSION
PRINT TRANSCRIPT
I had a tablet that they prescribed me and I was okay for a couple of years. And then they prescribed me another tablet, called Ropinirole back in 2002. When was it? About three years ago? About three years ago, yes, Ropinirole. And I started to take it. And we’d just got the Internet on the computer. So I happened to go into a gambling site on, on the computer and found this Virgin bingo game. And we, we, me and my little boy were on there playing bingo and I won £17. And I thought, “Oh, this is good.” And then I started to play this bingo more and more and more. And then I got into this, slot machines. And I thought, “God, this is really good. I’m really enjoying this.” And this went on. And I was playing it every night, coming home from work and I, really enjoying it. My husband knew I was playing and stuff. And I thought, I didn’t think that anything was wrong. And what happened next was, I went to the hospital four months later and she said, “Are you doing anything odd?” She, I said, “Well, no” and I said, “I’ve been playing a bit of bingo.” And she said, “You’ll have to watch that.” And I said, “What do you mean, you’ll have to watch it?” And she said, “Well, because some tablets can give you addictive tendencies, and gambling is one of it.” And I said, “Oh, but I’m not gambling, am I? I’m only playing bingo and having a go on a few slot machines.” And I didn’t, really take much notice of what she said. And I got into such a state with the tablet that was giving me this addictive ten-, tendencies. I gambled and I gambled and I gambled. And we’re lucky to still have our house at the moment because I, I spent lots and lots of money, which we didn’t have. So a year and a half, two years ago we went insolvent, still because I couldn’t, we couldn’t pay the bills. My husband really, was really upset about all this. And we, we manage by hard work now. We’re both, my husband works seven days a week most weeks and I do a bit of overtime and we’re just managing to keep our heads above water, because of this gambling thing when I spent all this money. But I didn’t realise, I’d never gambled before and I didn’t realise that gambling was such an addictive thing. And I stopped taking the tablets. They changed my tablets and it stopped. I don’t, I do my lottery ticket once a week, but the gambling stopped. I don’t want to do it any more.  So that was a really really bad experience for all of us.
They took me off the tablets straight away. The neurologist was really  concerned about me. Because I, I just broke down crying. I said, you know, “I’m lucky my husband is still here really.” Because it, it was, it was thousands and thousands of pounds that I gambled. And  she took me off in the April, and it took till June, beginning of June. And I still gambled a little bit, but it just went away.
Previous Page
Next Page