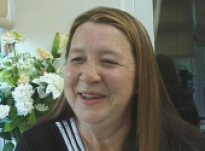 Age at interview: 44
Age at diagnosis: 43
Brief Outline: Elaine was diagnosed abut 6 months ago though some of her symptoms had been coming on for several years. Many of the problems she had had have improved since she began on medication.
Background: Cohabiting, no children. Senior Operating department practitioner (NHS).

Elaine used to work long hours in a hospital as a senior operating department practitioner. For some time she had been feeling very low in energy, wanting to sleep during the day and having some difficulty walking. It had probably been coming on slowly for several years but she hadn’t felt this wasn’t something she could go to her GP about. She put her symptoms down to her concerns about her father’s serious illness. Once before she knew there was anything wrong with her she found herself suddenly unable to use her arms effectively while swimming. At the time she put this down to too much sun. She did consult  her GP when she noticed her left hand was shaking but he thought it might be a ‘benign tremor’ and put her on Propranolol. But when the tremor got worse she was referred to the local consultant neurologist. She was not given the diagnosis at the first consultation when various tests were carried out. It was suggested that at her next visit she should bring someone with her. This didn’t strike her as particularly worrying. When she was given the diagnosis she was actually relieved to know that her symptoms had not been imaginary.

Once she began on medication the tremor and the feeling of exhaustion improved as did a left sided facial twitch which she had not been able to explain but had caused her some distress for some time. She is still off work but is due to go back soon. She was fortunate in having taken out critical illness insurance some years before and she received a one off payment from this. She also had mortgage repayment insurance but was having some trouble with that claim because she had been off sick during her father’s illness, before the Parkinson’s disease was diagnosed, in spite of it almost certainly having contributed to the difficulty she had been having carrying on with her  work at that time.

Before she was put on anti-Parkinson’s medication she had become quite withdrawn and unwilling to go out with her friends. Since her symptoms had improved she feels much more like her old self.

She has bought a dog, feeling that it is important to do a lot of walking to maintain her fitness. She believes she may be experiencing some degree of compulsive shopping but is not unduly concerned about this though she is aware it could be a problem with the medication she is taking.

Elaine was given a thorough examination the first time she saw the neurologist.

Show in context
SHOW TEXT VERSION
PRINT TRANSCRIPT
Yeah, the first time I ever saw her before I was diagnosed she did do a full examination. She wanted just doing have a look at all my limbs and everything because I did have a problem with my foot which we realise now isn’t really connected to Parkinson’s. It’s something separate which is why I haven’t mentioned it. But she noticed that straight away because it’s not quite right. But otherwise that was it really she just had a look at all my limbs and was looking at me shaking. Had me do some co-ordination movements and things that made you feel very silly actually. She wanted to see how I walked and I just think what she did, marching on the spot with my eyes shut, that was another one.
And I did turn to the left actually, I was moving, can’t remember it’s all a bit of a blur really because you don’t I was sort of nervous when even though I work in that environment I’m always nervous when I go about myself which is probably one of the reasons that [my consultant] likes you to take somebody with you so that you’ve got somebody that can tell you what happens.

Elaine has some idea of the neurophysiology of her disorder but it doesnt help her understand...

Show in context
SHOW TEXT VERSION
PRINT TRANSCRIPT
No, well Parkinson’s is due to the fact that the brain cells that produce dopamine in your brain die off for some unknown reason and it’s when the level drops to below twenty per cent that you start getting symptoms so you have to have the dopamine replaced. And dopamine plays an important part in fluid movements with moving the muscle, it’s the transmitter, neurotransmitter that makes you move nice and slowly. Because another of my symptoms is I’ve lost, on the left side, I’ve lost my co-ordination and dexterity. For example, in the shower washing my hair, I can’t go like that and scrub really hard with my hand both hands. This one doesn’t want to do it. It has improved somewhat. It’s still not the same as this side but it’s better than it was. But that was really weird, I couldn’t do things bilaterally at the same time like scratching the dog’s ears behind his ears, and things like that. I couldn’t do it because this hand doesn’t want to do it. It was even worse than that before I went on the medication.
It’s not like feeling numb.
No, not at all. Everything feels normal. It’s just that it just won’t do it and you just want to say, “Well, why won’t you do it? Come on.” It’s really strange, no pain, no anything it just doesn’t want to do it even though your brain is telling it to do it. And it’s still not the same as the right hand side but it’s better than it was with the medication.

For Elaine too the diagnosis and also the start of treatment made sense of symptoms for which she...

Show in context
SHOW TEXT VERSION
PRINT TRANSCRIPT
So it was about six months ago that I was diagnosed finally and then everything has sort of happened all at once, all the drugs and different things. It was a relief to find out actually. I wasn’t fazed by it at all because I thought I was perhaps going a little bit crazy, imagining things etcetera or it was the death of my father or other outside influences that were causing these symptoms. So it it was a relief. I was glad that there was something wrong with me if you like. And then I got on to the medication and everything’s improved since then. I’ve just got better and better and better.

Elaine's partner was perhaps too inclined to feel that she should not do things.

Elaines partner has commented that she is shopping a lot.

Show in context
SHOW TEXT VERSION
PRINT TRANSCRIPT
My partner thinks that I’m shopping too much which maybe I have to agree with him because I do have to go shopping a lot of the time. I know it sounds silly but I’m not happy unless I’ve bought something when I go out which I wouldn’t have done years ago because I was very, very conservative, you know, savings put away and everything covered. But I am a little bit more nonchalant about it nowadays I have to say which could be could be connected. I have been warned that are there are there is a possibility of that happening so I need to pull the reins in I think and see what. But then I am a woman so is it just being a woman because women like to shop don’t they, well all my friends do anyway.
Previous Page
Next Page