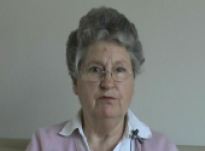 Age at interview: 68
Age at diagnosis: 66
Brief Outline: Diagnosed three years ago, Ann has tremor in her right hand. The first year after diagnosis was very difficult, but since taking Mirapexin, she feels more able to cope.
Background: Married, 3 adult children, Batik Artist.

Three years ago, Ann noticed that her right hand was shaking and when walking it became tense and painful. Ironing was also becoming slower and more difficult. Three visits to her GP during the course of a year led to no firm diagnosis. At her final visit, she suggested to him that she might have Parkinson’s disease and he agreed to refer her to a consultant.

The first year after she was diagnosed was very difficult. She felt frustrated and angry, and frightened of what the future might hold. Six weeks after being diagnosed she was prescribed Ropinirole which made her feel very depressed, lethargic and nauseous. After two months she came off the medication. But it was another six weeks before she could start taking Mirapexin. This made her feel so much better and more able to cope with her diagnosis. She attended a six week course for newly diagnosed people organised by the Sunderland Health Authority, which was a very good source of support. Then she planned a six week holiday to New Zealand with her husband.

Now she lives each day at a time and if she can’t achieve what she wants today, she tries again tomorrow. Simple things like ironing or washing the floor are difficult. Her voice becomes croaky at times and she misses singing in church. Holding a conker helps to take away the pain she feels in her hand when out walking. Twice recently, she has increased her dosage of Mirapexin, which has improved her symptoms but she doesn’t want to increase it too much or too quickly.

She goes to yoga and swimming. She gardens regularly and every day she goes for a brisk walk. She is still able to practice her art, and when she shows her work at craft fairs it helps her to feel like her old self again.

Ann is not sure how well her husband will manage if he has to care for her and she doesnt want...

Show in context
SHOW TEXT VERSION
PRINT TRANSCRIPT
It worries me, a bit. My husband is not domesticated. He’s never, his job has come first in his life, before everything. I’m having to try and teach him how to cook, occasionally. He’s having to come and chop vegetables for me at times. He’s having to do odd jobs that, he’s having to learn how to iron. I feel that there might be a time when I can’t do some of these things and he might have to take over. And I don’t think he understands. If I say, “I’m aching” he’ll say, “Oh, what’s that with?” And I’ll say, “Well, it’s just part of it. My body’s aching, my shoulders are aching.”   I’m glad that I’ve got my family near me, but I don’t want to  rely upon them. They’ve got their own lives to lead.
I’m hoping that I’ll just, I can go on as long as possible as fit and as well as I am. It is progressing. I know that it is. In two years it has, it has definitely progressed. But then I’ve got another two years and if it’s only progressed the same amount I’ll still be fine. But I’m slowly telling my husband that it might be, that he might have to help more. But I don’t want to think too much about it.

A 6-week course gave Ann a lot of practical help but she doesnt feel ready to join a PD group.

Show in context
SHOW TEXT VERSION
PRINT TRANSCRIPT
I must say that the authorities have looked after me  very well. They sent me to a group where we learnt to do exercises, and gave me information on the Parkinson’s Disease Society, which has made a terrific difference to me. Their leaflets are very informative. I’ve come to rely upon them.  And I’ve now discovered that they can do it in large print, because I’m having problems with my eyesight.
We, we, the group met for about five weeks and we had, somebody came to tell us about Social Services, the help that they could give, the speech therapy. And I went and had a, a session with them because my voice becomes croaky at times. And I, I’m unable to sing now, which is a shame because I loved singing in, in church. I’m singing an octave lower and singing alto when I can. But that’s one of the things that I miss, that, that’s affected.

Ann came to adopt a very positive attitude to the diagnosis she had been given.

Show in context
SHOW TEXT VERSION
PRINT TRANSCRIPT
When we first thought about having Parkinson’s, my husband and I  were [name of town]. And we sat and discussed it and said, “If I have got this, let’s do something positive. Let’s go and have a holiday of a lifetime. Let’s live.”  So we, that first year we planned, the whole year, and the second year we went  to New Zealand for six weeks. Wonderful holiday, the best thing I ever did, we ever did.  It was just fantastic and it made me realise that life’s for living. And I didn’t know anybody who had Parkinson’s. But then found out that [in name of area] where I used to live, there was a lady who I was, an old lady who I was very fond of, who I found out had had Parkinson’s for ten years and I didn’t realise. And she was a fighter. She baked every day and gave things away, and said, “I’m never going to stop, because if I stop, I’ll never get going again.” So I thought, “Right, that’s the same with me.  I’m going to do things that,  that I want to do, that I need to do.  If I want to work in the garden, I’m going to work in the garden.”

Ann realises that she no longer thinks about her Parkinsons disease when she wakes up each ...

Show in context
SHOW TEXT VERSION
PRINT TRANSCRIPT
I wondered if there would ever be a time where I would wake up in the morning and not immediately think, “I’ve got Parkinson’s.” That time’s come. I don’t think like that now. But those first few months it’s there all the time. And this is the, the problem in the first year, that you can get extremely depressed just learning to live with it, learning to know that that’s what you’ve got. You can’t take it away. You’ve got to live with it and you’ve got to live through it, and if possible you’ve got to do the best you can with it.

Ann was worried about her Parkinsons and her deteriorating vision so she arranged for a test...

Show in context
SHOW TEXT VERSION
PRINT TRANSCRIPT
The main problem I’m having is that any classes I’ve got to go have got to be on a bus route or get a lift, because  I’m going to have to stop driving very soon. I was sent by my GP to, the DVLA asked me for a, a test last year. And I think it was a combination of the Parkinson’s and my eyesight. I had a two hour twenty minute test with the DVLA asking me questions, giving me a physical, slightly physical examination, a mental examination, then driving an unknown car round a track and then driving with two passengers all round the city and down the motorway. Two hours twenty minutes. And I passed and felt, that gave me such a boost to my morale. I hardly ever drive down motorways, but I had to do that in the test and felt oozing with confidence. But I’m not driving much now.

Ann appreciates the need to keep the dose of pramipexole as low as possible but it has had to be...

Show in context
SHOW TEXT VERSION
PRINT TRANSCRIPT
What I’m unsure about in the medication is that I don’t want to increase too much. I’ve got it in the back of my mind that I need to go up slowly. And when I realised a few months ago that I needed to increase the medication, I went up, with the doctor’s agreement, to the smallest possible increase. But then three months later I needed another small increase. And now another two months later, I feel that I still need another increase. And I, I’m going to see the consultant this week and hope that she will increase it and talk me through what medication I ought to be on.
What difference do you notice when you increase it?
My hands are able to move, my right hand particularly is able to move more freely. Simple things like ironing or washing the floor, the right hand doesn’t work sometimes. Holding a knife, trying to chop things, it doesn’t work, it hasn’t got the strength in it now. When I go out walking I seem to fall over my feet a bit. I used to be a, a big walker. I’m not walking as much as I should, not as much as I used to, and I think I ought to make more effort to get out and walk more. But the medication makes me, stops me having all these feelings, especially in my hands. It’s a very difficult thing to explain why you need more medication. Just suddenly things aren’t working as well as they ought to.

Ann realised that if she adjusted to her body's demands she could go on with gardening and yoga.

Show in context
SHOW TEXT VERSION
PRINT TRANSCRIPT
I never was one for sitting relaxing very much until an evening. And now if I work in the garden for half an hour and I need to sit down, I go and sit down and have a cup of tea and relax. And then go back and do a little bit more. I found that planting the garden out last year was very difficult. But ten minutes at a time even. Or change what I’m doing, so I’m changing my posture. Sometimes when I’m working in the garden I ache. My shoulders, my neck, my back aches and I have to take paracetamol and change what I’m doing or sit down and relax for a while. It’s adjusting and learning to adjust and accept that that’s, that’s part of having Parkinson’s. But then I get a sense of achievement when I’ve done what I set out to do. I’m trying to dig the garden over to get vegetables in, but I do one row at a time, instead of normally I would have dug the whole plot. I just do one row and plant something. And then the next day, if I’m fit and well, dig and plant again.
I do yoga, which I enjoy enormously. And the teacher has adapted yoga things for me. Whereas other people are standing balancing on one leg, I can put my fingers on the wall and, and still do what they do but with a little bit more help. There are times that one side of me tipples over and she comes and steadies me. And I find that really good.
Previous Page
Next Page