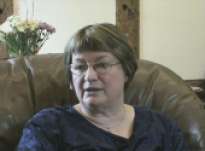 Angela began noticing that she was losing the use of her left side 15 years ago. At the time she didn’t have any tremor, only pain in several parts of her body which was investigated and she was diagnosed with osteoarthritis. She started having tremor on her left side in 2004 and she went to her GP who entered her in to a clinical nerve trial. Very quickly she was diagnosed with Parkinson’s Disease. She was relieved to finally have a diagnosis after feeling for many years that there was something wrong.

At the time of her diagnosis, Angela had several bad falls which had shaken her confidence. Physiotherapy and hydrotherapy helped her greatly to regain her confidence and to improve her mobility. At first Angela tried to deal with the symptoms of Parkinson’s Disease with alternative pain relief and therapy, but her health deteriorated. After taking Roprinirole there was a noticeable improvement in her symptoms.

She went on a Sinemet drug trial but she had a very bad reaction to it straight away so she switched to Ropinirole which she continues to do very well on. After having considerable pain caused by rigour on her left side, she began taking Lyrica, but she gained two stone in two months. She switched to Amitritylene which worked for a while but it is becoming less effective as time goes on.  When she was taking Requip medication three times a day she was getting very disorientated and drowsy. Now, she takes a smaller dose every two hours, and although she feels very tired in the evening, this works better for her.

She started five elements acupuncture a year ago and it was a major turning point in improving her general wellbeing and confidence. Yoga, Tai Chi, and hydrotherapy help to keep her mobile and build up her stamina.

More recently she has noticed that the shaking has become more pronounced and she has memory lapses where she can’t find the word she is trying to say.

Angela feels optimistic about the future. With the considerable research that is being done, she feels that the prospects for people living with Parkinson’s Disease are better than they have ever been.

Angela admires the PDS and questions the value of a proliferation of separate organisations all...

I think with all the research that's going on the prospects are probably better than they've ever been. I get a bit concerned about all these major charities they may say they've all got different perspectives but at the end of the day surely what they're all supposed to be doing is looking for the cause and hopefully finding a cure for Parkinson's. And I'm a bit concerned that vast sums of money are going in different directions, certainly charity-wise, that really could be better managed focused together. I mean they found this with cancer didn't they, they've coordinated, brought all the cancer charities together under one umbrella, I really can't see the point of having more and more Parkinson's charities. I think that we should be, they should be working together and pooling resources. I'm sure they do, I just don't see why somebody has got to swan off and open up another one. And especially with the huge sums of money that are being involved and what is their impact on the person with Parkinson's? Yeah I do have concerns about that.
I mean everything I've had from the PDS I can't fault, I've had a very good service. I think it's an excellent organisation.

Angelas GP had no idea what was wrong with her but agreed to enter her for a nerve trial. Once...

Show in context
SHOW TEXT VERSION
PRINT TRANSCRIPT
Right well I first thought there was something wrong about probably getting on for fifteen years ago now. Almost imperceptibly I seemed to be losing the use of my left side and I went to the doctors, it never, it was so imperceptible no shake, no tremor, no nothing, I just felt that my left side wasn't doing the things that it should be doing. And I had shoulder pain and elbow pain and neck pain and hip pain, knee and ankle and foot. And it got progressively worse and I kept mentioning it. I never went especially for it but it was irritating me, it was in the back of my mind the whole time. And so I got treated for frozen shoulder and tennis elbow and all those things, which I didn't particularly feel were the cause of it, however they were symptoms. And then the tremor gradually began to show, all left side, nothing on the right side. And because I think I'd been such a pest I went to my GP and he said, I said, "Look you know this arm it’s really, it's not behaving properly."
So there happened to be a trial on at the hospital, the local hospital and I went in there and it was a nerve trial and so they sat me down and sent currents through and apparently there was absolutely nothing wrong with the nerves and messages going through the nerve pathway and from then on everything happened very quickly. The consultant who, the person who actually did the trial I didn't see again but the consultant who was obviously over, in control of the whole thing had me to go and see him and did various tests and things and it was determined very quickly that I'd got Parkinson's. And from then on everything happened, that was about three years ago, yes three years ago. And the treatment since then has been absolutely fantastic, I cannot fault it at all.

Angela knows she has no family history and is convinced that her Parkinsons was caused by being...

Show in context
SHOW TEXT VERSION
PRINT TRANSCRIPT
One thing that I did find though, which was quite helpful, was that I've actually researched how I might have come about getting it in the first place. And it's fairly certain in my case that it's organophosphate poisoning from when I was courting and I first got married in the 60s and 70s. People, I come from Manchester and I've been a city dweller. My husband had long slow exposure to organophosphates which were in common use in every area of agriculture, we had stock. There's no history of Parkinson's or anything like it in either side of my family going back as far as I can trace, no shaking palsy, no, nothing like it at all. And I've been doing family tree research, as you do when you get to a certain age, and there's no history of anything like it anywhere in the family so I'm convinced that that is the cause of it in my case. But I understand that there are debates about the genetics and the propensity and so on.

Show in context
SHOW TEXT VERSION
PRINT TRANSCRIPT
The physio was brilliant, it gave me, it taught me how to break the spasm, gradually increase the use of my left arm, improve my mobility by going up and down the stairs and it was wonderful as long as it lasted. I did so well on that and with the drugs that it stopped after a while but I gather it's rationed anyway round here.
I had hydrotherapy as well from the same physio service and I should have been rationed to eight sessions but because of the nature of the work I'd done before I was able to emulate people with various different disabilities so I was used as a dummy, a model in the pool by the principal hydro so I actually got about three months, it was good, of weekly sessions
What difference did that make?
Oh that was wonderful, made me much, obviously I could do things in the water. Most of it probably was to do with confidence but it was confidence and increased mobility so that I was more stable for walking, I had a better gait.

Angela has felt much better since she has been having regular acupuncture.

Show in context
SHOW TEXT VERSION
PRINT TRANSCRIPT
One of the big turning points for me is something that I've been able to do privately. I went for acupuncture and that started last November. It's five elements, classical, it's five elements Chinese acupuncture and the doctor who administers it is a former consultant anaesthetist who retrained in China in alternative medicine. And I started going once a week. Within three months I was down to once every three weeks, then once a fortnight and I go once a month and my mobility and confidence, general wellbeing, everything is just so much better. People who haven't seen me for a long time look at me and say, "You know you look great," right thank you. And I put that down to a combination of all the things but that for me was a major turning point. And I absolutely swear by it but unfortunately it doesn't do for everybody.

Angela nearly lost her license when she filled the form in wrong. Not being able to drive would...

Show in context
SHOW TEXT VERSION
PRINT TRANSCRIPT
I didn't really go anywhere without having somebody with me and fortunately I've got a fantastic family and friends and so I hadn't really been that conscious of it myself. My roommate from college who's Polish English, we went on a holiday to Poland three years ago and she said you know, I, it was after that that it really hit home to me that I had to be helped up and down even down small changes, that I really was reliant on other people. And one of the horrifying things was that when I got a social worker from the PDS, who was wonderful, we notified the DVLA and everything that I filled in with her I was okay for so I got my disability allowances. But a small form to the DVLA, they took my licence away. Well look where I live, eight miles from the nearest town, a mile and a half from the village, I was absolutely stuck.  But we revised it and sent it back and I've now got a temporary three year licence which was what I'd expected to get.  I'd still don't know what I filled in wrong [laughs] but whatever it was we undid it and got it, it was done within a month, full marks to DVLA they were very, very helpful.
Previous Page
Next Page