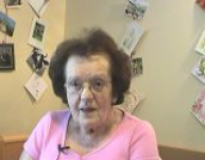 Age at interview: 74
Age at diagnosis: 72
Brief Outline: Maryse was diagnosed March 2005. She was told she had 2-3 years to live. Within months she could no longer live independently and moved into a nursing home. Her speech deteriorated rapidly.
Background: Maryse is a retired senior university lecturer, widowed with 2 adult children. Ethnic background/nationality' French.

(Maryse's daughter was also present and contributed to the interview)

Maryse first noticed symptoms in early 2005, around a year and a half before she was interviewed. She had recently taken up flying lessons and had passed a stringent medical to be allowed to fly, but soon after her first course of lessons her leg started to feel floppy. She went to her GP, suspecting it might be multiple sclerosis or motor neurone disease. Although her GP thought either diagnosis was unlikely she referred her quickly to a neurologist, and MND was diagnosed in March 2005. Maryse was told she had 2-3 years to live. At the time she did not cry, but now she often feels tearful when she wonders how much worse she will get.

Her condition has deteriorated quite quickly. She had to stop driving in July, and by September she needed a carer to help her get washed and dressed in the morning. She had lots of help from friends and help from social services with equipment such as a stairlift, but it soon became very difficult to manage at home. She moved to a nursing home in a different part of the country in January 2006, so she could be nearer to her daughter, although it was sad to leave her friends behind. At this stage Maryse was still able to walk with a Zimmer frame, but within two months could not walk at all. Her breathing and swallowing have become more difficult, and her speech began deteriorating rapidly. She takes riluzole, but does not feel it is having much effect on how fast her symptoms are progressing. It seems to make her feel very hot all the time.

The nursing home has become home now and Maryse feels well supported there. However, when she was admitted to hospital recently for a test, she felt the nursing care was very unsympathetic and that staff did not seem to appreciate her needs as a person with MND. They did not get her to the toilet on time, and later made her lie on her back when she wanted to be on her side. She was so upset she demanded to be taken home, but felt no-one was listening and they were treating her as if she was senile. The nursing staff contacted her daughter who told them to respect her wishes, so eventually they called a taxi and she went home. She never wants to go into hospital again. Similarly, although her first GP was excellent, two GPs she has seen since do not seem to know much about the condition or how to care for someone who has it.

Maryse knows she will die soon, and she does feel frightened and sad sometimes, but she feels lucky that she is not in pain and that she is in a place where she is well cared for.

She took up flying lessons but had to give up when she noticed her leg was becoming floppy.

She took up flying lessons but had to give up when she noticed her leg was becoming floppy.

View topic summary
SHOW TEXT VERSION
EMBED CODE
PRINT TRANSCRIPT
In the autumn 2005, I decided to find out about flying in the aeroplane, learning to fly in the aeroplane. My aim was to learn towards a pilot license. In January 2005, I passed a very stringent medical in order to start the course. And the course because of the weather, the course instead of being every week, was on average once a fortnight. I finished the course. I was assessed in order to take the second course and I was told I couldn't do that. But I told the assessor I was leaving for February and March because of the weather but that was not my reason [inaudible]. I had what could be described as a floppy leg. It was already floppy, no pain and I became suspicious. I went to see my GP and asked, 'MS?' She said, 'No, you're too old for that, too old for MS.' So I said, 'What about lower motor neurone?' And she said, 'No.' But she was extremely quick in referring me to a neurologist and on the 16th March I walked out of the outpatients with a walking frame, just as a precaution, I did not need it, but with the diagnosis of motor neurone disease.

It's hard to open her eyelids when she wakes, and she can no longer keep her eyes open to read.

It's hard to open her eyelids when she wakes, and she can no longer keep her eyes open to read.

View topic summary
HIDE TEXT
PRINT TRANSCRIPT
My eyes have deteriorated. My vision last week was less than 20/20. So it is not the vision, it is the muscle. In the morning it takes me a few minutes [inaudible] to open my eyelids. After a few times they open up. It is getting more difficult in terms of tiredness. I read three words very clearly and then it's too much, so I give up.

When she was admitted to hospital the nursing staff did not listen to her when she said she...

When she was admitted to hospital the nursing staff did not listen to her when she said she...

Maryse' So I and my friend went by ambulance, went to the nurses' station. And I said, 'I need to go to the toilet.' 'Oh we can't do that now, we're doing the take over.' So I retreated and went up ten minutes later. The same reply. I said 'Well, you should know I'm going to wet myself.' I said 'I'm not incontinent but I do suffer a little bit of urgency.' So then they joined me in the bathroom. Put me on the hoist and I said to them, I could speak a bit better than now. And I said, 'Take my trousers off and I'll be okay'. 'Oh no, you won't.' So they put me over the loo, sat in the hoist and then dragged me backward forward, behind to get my trousers down. You can imagine the result. So after that, they took me up to what was going to be my bed. I had a change of clothes that I brought in.

In the night her nose gets blocked and she can't swallow. She and her carers have found sleeping...

In the night her nose gets blocked and she can't swallow. She and her carers have found sleeping...

View topic summary
SHOW TEXT VERSION
EMBED CODE
PRINT TRANSCRIPT
Maryse' So gradually I've not been able to sleep in bed because my nose for some reason gets blocked. My, the mucus membrane of my mouth dries up and normally one can swallow. But it's too difficult to swallow. And it's not so much the swallowing but the back of nasopharynx is also inactive.

Maryse' Yes, it will be later' There might be some help with sucking the saliva. So because of that, it's, it is very frightening not to be able to breathe in the night. In a, in the recliner, what is it called?

Daughter' The recliner chair. We tried several, didn't we, before we got one that we found was okay.

And that helps with your throat, with the swallowing?

Maryse' The carers and I have gradually learnt how to position me. It's only in the last week that it is getting better. In the last week, example, I go to bed at 11.30. I need care between 2 and 3 and last night I slept from 3 until half past eight.

Maryse' I didn't get up. I think the [inaudible] makes me a bit drowsy. So what are the changes? I was taken to lunch on Wednesday and it was tender fillet of steak, really perfect and my friend cut it for me. And I realized that the chewing is fine, the swallowing is fine in terms of food but my tongue has, is going or partly. It's not moving as it should.

She was sad to leave her friends behind when she moved to a nursing home near her daughter, but...

She was sad to leave her friends behind when she moved to a nursing home near her daughter, but...

View topic summary
SHOW TEXT VERSION
EMBED CODE
PRINT TRANSCRIPT
Daughter' In November, [son] came, didn't he, but you were finding it quite difficult. If he hadn't come you wouldn't have been able to stay at home.

Maryse' Before that we investigated nursing homes in Bristol. [daughter] found this one in October and we came to visit it. And I thought it was the nicest one of them all. But I didn't want to leave Bristol because of all my friends. From March, my son, he came again from Australia and he helped me during the night to get up. I was losing more and more balance. And the carer said we should have two carers. Even I had a fantastic bath. If I went in that it became too hard for one carer and that was when I realised that it was time to do something. And [daughter] said, 'Let's ring up this place.' And the response was that there might be a bed in the next week. I came here on the 10th January.

Maryse' You were saying, asking me about adapting. It's amazing, I came here voluntarily and it's my home. Something, I don't know what it is, but it's playing a positive influence, yes.


She knows she's dying and so do her friends. It's frightening, but everyone has to die and she's...

She knows she's dying and so do her friends. It's frightening, but everyone has to die and she's...

View topic summary
SHOW TEXT VERSION
EMBED CODE
PRINT TRANSCRIPT
You said that you realised you had a lot of friends. You were telling me that off tape before. How have different people reacted to you? How have these friendships changed or not?

Most are shattered and frightened. But most of them have learnt to accept it for me. And when they come they ask, and if they can't see they ask for the changes, and I tell them. And then I say, 'Turn the page.' That's my expression for no more. They all know I'm dying and it won't be long. So I say, 'Right, turn the page. And what have you been up to?' and so on, and we don't mention it again. But they are very attentive to my needs, switching the TV on and so on. People are lovely really. But it is frightening, isn't it? So there we are. My philosophy is that a lot of people are going to die in the next week and they don't know it. And similarly a lot of people suffer pain. I'm very lucky, I don't. I've no pain which requires analgesic.