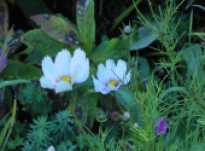 Age at interview: 57
Brief Outline: Rebecca's symptoms included heavy periods, hot flushes and poor memory. Media reports made her wary of HRT. A positive attitude has helped her make a successful transition. Now postmenopausal, she is enjoying a new sense of freedom.
Background: Rebecca is a retired NHS manager. She is married with adult children. She started the menopause at age 48 and had her last period at 52. Ethnic background/nationality' White British.

From her late forties, Rebecca noticed her periods becoming unpredictable and ‘really, really heavy’, particularly on the second and third day. Despite taking precautions including wearing black trousers, she describes how she had ‘several accidents’ even at work. Referred to a gynaecologist at the hospital for an internal scan, Rebecca was reassured that ‘it was probably just menopause’.

Although she experienced hot flushes, and still does occasionally, these caused more embarrassment than concern. In meetings at work, for example, she felt self-conscious, believing that everyone was looking at her. She replaced her much loved polo necks with jackets which she could take off easily. Although Rebecca considered going on HRT at one stage ‘to protect her bones and heart’, she changed her mind after reading adverse media reports suggesting a link between HRT and cancer. She wonders whether the death of her sister from ovarian cancer last year could be related to her long-term use of HRT.

Poor memory throughout the menopause transition has been a source of frustration. Rebecca describes how, in her management role at work, she had to ‘write things down and make sure I remembered things I had to do’. Now retired, she continues to have problems with recall ‘even people’s names that I know well, their name just escapes [me]’ though is unsure whether this problem is caused by the menopause or by getting older. As well as reading books on improving her memory, she ‘couldn’t live without’ her diary.

Rebecca stresses the importance of maintaining a positive attitude to the menopause and has resisted the tendency to let the menopause dominate her life. It is now around five years since her last period. She keeps healthy and stays slim by swimming or walking five days a week, cutting out fats, cutting down on alcohol, and eating fruit every morning. Since retiring last year, and with her youngest daughter now at university, she is enjoying a new freedom ‘to do whatever you want to do, when you want to do it’.

Rebecca was interviewed for Healthtalkonline in June 2009.

Rebecca describes the negativity about the menopause in our society. She argues that women are...

Rebecca describes the negativity about the menopause in our society. She argues that women are...

Because there’s something about the menopause as well that it’s almost, there’s a negativity around it I think not only from women themselves but how other people [see it]. It’s nearly like a put down towards women. “Oh, they’re in the menopause.” There’s fun poked at people at times or sometimes women say themselves, “Oh, I have the menopause, everything goes south.” It’s like I forget everything and that’s the bit I don’t like about, and I think to myself, “I’m not.” I don’t contribute to jokes like that and I feel irritated or annoyed if people do that. It’s almost as if you’re over the hill. You’re no longer of use and maybe it’s something to do with not being able to produce children or something. Maybe there’s a connection there, that women can’t or don’t generally have babies after 45, 46. It’s almost as if they’re made redundant in some ways. And I know at the same time you can blame society but is that how you see it yourself. So from that end of it there’s probably a bit of me wants to say, there’s no problems with the menopause. I’m not going to make it a big deal.

Why do you think society has got such a negative attitude to it?

Maybe it’s because it’s a female thing or something and maybe it’s because of that age. It’s almost as I say, we talked earlier about women feeling made redundant as a woman because I suppose, when you think of it basically, we think why we’re put on this earth is to men to make sure that they procreate and women have children to make sure that the human race doesn’t become extinct sort of thing. And at that stage then that’s the woman’s job over and I wonder sometimes, in our heads do we see that’s the woman just on the shelf now, they’ve nothing more to contribute as our basic reason for being on this earth. And that’s not to say we have a whole lot to contribute sort of thing, and I know that I’ve a whole lot to contribute both personally in my family sort of thing and I’ve more time to do it now as well.

My memory is probably the thing that I think, God, I can’t remember things or names just go out of my head and I find that frustrating as well. And I don’t know whether it’s to do with the menopause or it’s to do with getting older or my plaques in my brain starting to fur up or whatever, I don’t know. I’m not sure but I’ve noticed it definitely in the last few years but most of the people that are my age seem to be the same so I get some sort of comfort from that, that at least I’m not the only one. It’s only when you’re with younger people and particularly at work sometimes when you couldn’t remember things and or even names, you think, “Oh.” But if it was somebody the same age as you, you don’t feel as bad then sort of thing or with my children sometimes I think they’re noticing it as well that my memory’s not so good.

And saying that, it’s not stopping me doing anything and I have ways around it. Even thinking about names, if I can’t remember the name of somebody I go through the alphabet and then I think if I still can’t remember I think it’s maybe a C or a D I would think about DE, DA, DO, DU, trying to think of names round that way so I have ways round it if I can’t remember or at the end of it, I would just ask sort of thing.

Did you ever think at all about going on HRT?

I did think at a stage, I thought maybe, I wonder will I when I’m coming up to the menopause but then I never seemed to get around to it and then, as I say, when my sister had been on it for about ten years. And I think at that stage, that was the, do you remember there was a big survey done worldwide and they had identified that there was people it had caused cancer so she came off it at that stage. And at that time I thought no, I wouldn’t. I wouldn’t be interested. I thought if I can manage. It’s not because I had discussed it with my other two sisters and they were saying, “Sure it’s, if you can manage with hot flushes so”. But I said, “It’s more than that. It’s about protecting your bones and protecting your heart”, things that people aren’t aware of, however, because of my sister’s experience I would be reticent, or hesitant to start HRT.

My eldest sister as I say was on HRT for ten years but she developed ovarian cancer and died February a year ago. So I don’t know whether it was HRT or whatever but, she didn’t realise that she had ovarian cancer until they discovered secondaries and she had always led a healthy [life] she never smoked. She didn’t drink or anything like that so I don’t know whether that has anything to do with it but because of that I wouldn’t consider it.

Rebecca believes that doctors should raise the subject of the menopause and discuss it when women...

Rebecca believes that doctors should raise the subject of the menopause and discuss it when women...

I think it would be a good idea that a woman of a certain age could be asked when they’re in, no matter what they’re in for, just ask about the menopause. Have you noticed it? Where are you at with it? How are your periods? What are the symptoms? Maybe to gather up information or at least to create awareness. And then I suppose for health professionals to be aware themselves as well, to be up to date on what’s happening around it sort of thing.

Maybe things like say the vaginal dryness, is there anything that they would recommend that you could take. Around HRT I would like them to have the inside knowledge, I would like them to be well-experienced and be really knowledgeable about it as well so that they could give me all of the information that I need to make a decision sort of thing. I think I would also like them to be proactive rather than reactive when women come into the surgery.

So I think that’s probably the things and then when people come in with other symptoms, with symptoms of something else that they could check out to see maybe is it the menopause?