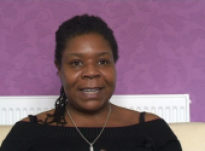 Age at interview: 46
Brief Outline: Despite night sweats, weight gain and poor memory, Marcia has not found the menopause too problematic, managing her symptoms without HRT or alternative remedies. She believes lack of information leaves women feeling unsupported during the menopause.
Background: Marcia is the CEO of a charity. She is divorced with two adult children. She started the menopause at age 45. Ethnic background/nationality' Afro-Caribbean.

Marcia’s menopause story began at age 45 when her periods started to become irregular. Experiencing lower back pain and bloating and with a history of fibroids, she consulted her GP for reassurance that her symptoms were the start of the menopause and nothing more serious. While her GP did not feel that a blood test to confirm menopause was necessary, he did send her for a scan to assure her there was nothing else to worry about.

Since then, Marcia’s periods have gradually declined and have now ‘more or less stopped altogether’. Despite not bleeding each month, she has noticed that the lower backache and bloating return ‘like a reminder’ when her period would normally be due. Although she has experienced hot sweats which wake her two or three nights a week, she does not find these problematic.

Marcia associates her weight gain with the menopause. Despite exercise and a balanced diet, she feels frustrated that she cannot control her ‘fifties stomach’. She has also noticed more ‘granny moments’ when she forgets what she was going to say next or why she has come upstairs. On the plus side, however, she is relieved that she no longer experiences premenstrual mood swings.

Marcia does not feel that her symptoms are severe enough to go on HRT and would prefer to try homeopathic or herbal remedies if necessary. She is disappointed that her GP did not give her any information about menopausal symptoms and treatment options. From a social perspective, she believes women’s issues are ‘brushed under the carpet’. The reticence to discuss aspects of the menopause or to provide relevant information leaves women feeling unsupported and confused.

As a menopausal woman, Marcia is enjoying the fact that she no longer has periods. With five grandchildren, she is coming to terms with the fact that her own ‘baby days are over’. After giving so much time to others, Marcia is looking forward to having some ‘me time’ and dreams of having ‘a nice house by the beach somewhere’ in which to spend her retirement.

Marcia was interviewed for Healthtalkonline in February 2009.

The memory is really bad. I mean just this morning I picked up the credit card, thought I’d put it in the tea [room] and went to look for it, couldn’t find it and had to call one of the staff members to come and look. So yeah, the memory is getting affected. I go upstairs and you can’t remember what you’ve gone upstairs for. And I’ve got two children and I can’t remember their names. I call them vice versa names. And I notice sometimes when you’re talking you can’t remember what you were going to say next and you go “um, er, er, er, er” and then it comes back to you. Yeah.

And that started pretty much when your periods stopped did it?

Yeah, I noticed it more, I call them my granny moments and I run upstairs and I call “Ah, you granny”.

Marcia manages to sleep even though she has night sweats

Marcia manages to sleep even though she has night sweats

And what do you do about it?

I usually discover it just before I get up so it’s usually time to get up anyway, so I don’t really do much about it. But I noticed in the last four months that it’s becoming more frequent like every now and they used to come like every now again but just in the last four or five months I’ve started to notice that it’s like a couple of nights a week that I wake up feeling like that.

And does it affect your sleep?

No, no, no. I think that it occurs just before I wake up because although I think I’ve probably had a couple in the night but they’re not, it’s not to the state where I have to get up and strip the beds and things like that.

I must be honest, I’m not satisfied with both the consultant that I went to see and also my GP. Even because, one of the reasons why he’s my doctor is because I’m concerned that there’s not enough support for women around gynae issues and so when I joined that surgery it was because he was a gynaecologist so I was thinking “Oh good, I’m in good stead for when I start the menopause etc.” And so I’m disappointed that I haven’t been given any literature, there hasn’t been any, there isn’t any support really for women to go out and find out any information about it.

I’ve changed my GP within the practice. I’ve found out that there’s a woman who specialises in gynae issues. So I’ve just registered well I’ve started to see her now.

And is that different?

I just feel more comfortable talking to her than talking to the male. I thought when I chose him as my doctor because he was a gynaecologist I thought I would have the confidence but the conversations that we’ve had have just been so matter of fact that that’s why I decided to move.

Marcia says that literature would help at an early stage

Marcia says that literature would help at an early stage

I think if they’ve got any literature they should really be giving you the literature at an early stage so like when I went and said that my periods were starting slowing down and stopping that if I’d had information about what this might be. So that you could say you might be going through your menopause, these are the symptoms to look out for, and then talk about the different sorts of treatments like what is HRT, so that you know what it is so that you can actually kind of plan your menopause in a sense.

Marcia has put on weight around her midriff. She talks about her fifties stomach

Marcia has put on weight around her midriff. She talks about her fifties stomach

Weight, I seem to be putting on weight and I don’t have a lot of chocolate or crisps or anything like that. I have quite a balanced diet, in fact I probably don’t eat enough because of my lifestyle but I do find that I am putting on weight particularly around my midriff, nowhere else it just seems to be all coming onto my stomach and I’ve tried exercise, I’ve tried really monitoring my food but I’ve noticed that I call it like the fifties stomach and it starts to come from underneath your breast bone and just kind of just permanently looking like you’re four months pregnant.

And does that bother you?

Yeah, I think it does bother me because everyone wants to be trim but if I was over eating I would say “Oh, well it’s because I’m over eating” but it is just the feeling of not having any control over it because you’re trying not to overeat and you’re trying to live a kind of healthy life and it’s still getting bigger, it’s a bit frustrating.

And yeah, I think there needs to be more awareness of it and more open discussion about it as well.

So do you mean open discussion within the GP’s practice, what do you mean?

I think in society, I’m talking more from a society perspective. We talk about pregnancies, I mean periods are advertised on the telly, tampons and things like that, but there’s no discussion about menopause and I think that that is a real barrier to people especially if they’re going through mood swings or memory lapses and they don’t know that that could be the start of it or part of it. Sitting at home worrying and thinking is there something wrong with me because at first when I used to have the memory lapses I’d think what’s wrong and then talking to people you think, oh that’s part of it. Yeah.

That’s interesting isn’t it. So why do you think women and society generally don’t talk about the menopause?

I think it’s to do with women’s issues anyway. I think women’s issues are always sometimes brushed under the carpet and because it’s a thing that’s going to happen to you naturally, why should you be concerned about it because it’s going to happen to you anyway. But I think that the effects of it on the family and society, people should talk about it a bit more so they can be more supportive if support is needed.