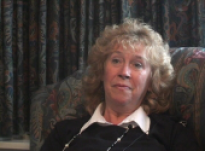 Age at interview: 61
Brief Outline: Karen started the menopause at 40, with hot flushes and mood swings having a considerable impact on her life. Initially prescribed HRT, this was discontinued following surgery to remove fibroids and polyps. Experienced withdrawal symptoms for 6 months.
Background: Karen is now retired after working as a partner in her husband's plumbing business. She is married with two adult children. She started the menopause at age 40 and had her last period at 52. Ethnic background/nationality' White British.

Karen’s menopause started quite early at the age of 40. As well as hot flushes which were disrupting her sleep, she felt she was ‘losing her brain’. Becoming increasingly touchy, irritable, short-tempered and confused, Karen’s behavior and inability to cope were having a negative impact on both her family and business relationships. For Karen, the trigger to consult her GP was when, in a fit of anger and frustration, she stormed out of a supermarket leaving her shopping behind. HRT patches and later, because of a slight allergic rash, tablets helped ease her symptoms.

However, the inconvenience of increasingly lengthy and heavy periods lasting around 21 days led to a referral to a gynaecologist. Diagnosed with large polyps and fibroids, which she links to her sterilization in her early 30s and her use of HRT, Karen underwent surgery to remove these. Within a few weeks, further surgery followed to separate the bowel and womb which had become fused causing bleeding and stomach pains.

Despite her doctor’s pro-HRT attitude and belief that long term HRT was ‘the thing for middle aged ladies’, Karen decided to give up taking it because of her experience. She describes the first six months of withdrawal as ‘a bit horrendous’, especially for her family because of mood swings, and on-going night sweats. She found, however, that visualization and relaxation techniques including ‘thinking of mountains covered in snow’ enabled her to cope until she completed the menopause transition in her early fifties.

Karen believes that women need to have clear guidelines on how to deal with the menopause as well as a dedicated menopause nurse at their doctor’s surgery. She feels that women are generally reluctant to discuss the menopause with each other and would welcome opportunities for women to share their experiences in small groups.

As a postmenopausal woman, Karen has not looked back and feels positive about the changes in her life. She has completed a psychology degree, and, since retiring at 55 has enjoyed travelling and new hobbies.

Karen was interviewed for Healthtalkonline in December 2008.

Karens heavy bleeding and clotting while on HRT was totally inconvenient and interfered with...

Karens heavy bleeding and clotting while on HRT was totally inconvenient and interfered with...

Was it heavy bleeding?

Not all the time. It was clotted at points, which I think that’s when it started really getting to my brain that this was totally inconvenient. If you went anywhere you had to go prepared so it was actually interfering with my general life.

It affects almost everything you do, as I say, even going shopping, you’ve got to go prepared. I needed to know where the nearest loo was. Even going out for meals with friends, everything like that, it does affect you and it affects how you feel. And your moods, your tempers and not wanting to go out and holidays become even more difficult, you’ve got small children who want to go swimming.

And then I think it must have been, I’m trying to think when it was, must have been after about six years it became that my periods were going on and they were forced periods because of the HRT, but they were lasting longer than the days that I had off and I was feeling generally unwell and the doctor was still quite happy that I should stay on HRT. All that he really checked was my blood pressure and my weight and they seemed to be okay. Eventually he referred me to a gynaecologist at [name of hospital] it was quite quick and they did a scan and said that I’d got quite large polyps and fibroids. And they whipped me in the hospital quite quickly.

I think probably my moods affected him more than anything. I was being a very unreasonable lady and he’s got a short fuse, much shorter than mine, so it wasn’t good for us.

Because I think you do sort of shut in on yourself a bit, you’ve got a problem, your husband doesn’t particularly want to know about your female problems, or at least mine didn’t, he’s still very macho man and you haven’t always got someone just to have a chat with.

So did you talk to him about it at all?

Not terribly. He was doing sometimes twelve hour days, he would come home from work, he didn’t want to hear my problems and we’ve got two kids that were squabbling, doing their homework, television programmes going on all over the place. He didn’t want that, he didn’t need it and I’m the sort of person that feels I can deal with things. I’ve always dealt with things myself.

I’m quite a positive person and I like to learn new things, do new things so for me it gave me more freedom because the menopause finished sort of early fifties and I’d made my mind up to retire at 55 anyway if the business would allow it, which we did. We sold the business and moved on, so it’s all very positive for me, it just allowed me to move on to the next thing and take up new hobbies.

And what are you looking forward to most as you get older?

Travelling more. Now I haven’t got my dogs, we’ve decided we’re going to spend more time actually travelling to places we’ve never been. I’d like to see Eastern Europe, Australia, New Zealand, Canada, further away because we could never do that when I’d got family and other things here. Just learning new things.

Karen is not impressed with the doctors in her practice. Theyre uninterested and out of touch...

Karen is not impressed with the doctors in her practice. Theyre uninterested and out of touch...

I just haven’t got a very good impression of the NHS lately. One thing you have got a choice of four doctors but I don’t get on particularly well with all of them. The one I’m seeing at the moment for my hiatus hernia I’ve known him for years, been there for years - pictures on his wall of when he was a rugby player - but you go in and he’s looking at his computer screen and they’re all very much like that. You walk in and they say ,“Good morning, how are you?” without even looking at you. I could be somebody completely different and I swear he wouldn’t know who I am. And he fiddles with his computer, “Ah, yes, is it the osteoporosis?” and you say, “Yes” or “No” or whatever, I said I’ve been seeing him because I have a bad back and leg and he sort of looked at me and said, “How’s your weight” and I said, “I’m a lifelong member of Weight Watchers, I do watch it carefully, I’m slightly overweight but not excessively”. “Do you take enough exercise?” I looked at him and I thought you’re about five stone heavier than you were when you took on this practice and I said, “Well yes” at that point I’d only got the one German Shepherd, I said, “I walk several miles a day with my dog. I did have two, I’ve always walked for thirty odd years, rain or shine my dogs need walking,” so he said, “Oh, right”, and you think he doesn’t know me. I’ve been coming to see you for years but you still really don’t recognise me or know me. And that’s the way I feel about most of them there now. So I’m always reluctant to change to another one who knows even less.

Because to me, a problem shared is a problem halved, particularly with somebody else who’s going through it and I don’t particularly feel that a male doctor has got any idea what a middle-aged lady is feeling like. They treat you almost like you’re neurotic, you’re just a middle-aged neurotic lady who’s got too much on her plate. I can remember at one time my doctor actually said to me, “You’ve got to change something in your life” because I honestly was neurotic at the time and as a throw away remark he said, “Change your job, change your husband, but change something”. And it was a throw away remark but in retrospect it was stupid. He hadn’t got a clue and I don’t think a lot of male doctors have. I’m sure there are some nice ones out there who’ve researched it and know what they’re talking about but I think they’re few and far between in local practices.