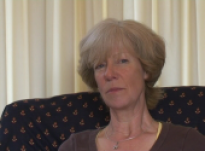 Age at interview: 54
Brief Outline: Feelings of emotional turmoil were the most distressing aspect of the menopause for Cheryl. Her inability to cope and increased irritability at home put pressures on her relationships. An understanding GP and two years on HRT helped ease her symptoms.
Background: Cheryl is a part-time teacher. She is married with two adult daughters. She started the menopause at age 46. Ethnic background/nationality' White British.

Cheryl first realized that she might be going through the menopause when, at age 46, her periods increased in length to around eleven days. After eighteen months, however, her periods returned to normal and it was another two years before they became less frequent and began to dwindle away. Alongside this, she experienced hot sweats each night for about a year, using a towel under her pillow to ‘mop her chest’ and help restore sleep.

Yet while Cheryl found hot sweats unpleasant and regretted the loss of her fertility, the onset of mood swings was of greater concern. Although she did not connect it at first with the menopause, Cheryl found herself getting ‘very very ratty and upset’, and ‘flying off the handle at the slightest thing’. She describes having ‘almost out of body experiences’ where she could see herself being irrational but could do nothing about it. With her husband increasingly retreating from her criticism, irritability and nit-picking, Cheryl turned in desperation to a sympathetic lady doctor at her surgery for help.

With a box of tissues at the ready, the doctor listened as Cheryl told her story and explained how her emotions were taking over her life. She was able to reassure Cheryl that her moods were hormonal and suggested that, alongside trying herbal remedies such as evening primrose oil (which had no effect), she consider taking HRT. For Cheryl, having someone to talk to who recognized her situation and ‘gave me all the time that I needed to get it off my chest’ was invaluable and the first step in coming to terms with her symptoms. Her family was relieved to learn there was a reason behind Cheryl’s moods.

Although at first unsure, after reading leaflets from her doctor and other books and magazines, Cheryl decided to go on HRT. She was also encouraged by friends who had found HRT helpful in overcoming their menopausal symptoms. Within a month of starting treatment, she found herself becoming calmer as her moods gradually abated. After two years on medication, Cheryl weaned herself off HRT over a three-month period. She experienced no side-effects and two years later remains free of emotional symptoms.

Cheryl feels that, after eight years, she is now coming ‘out the other side’ of the menopause transition. Although still having ‘the odd period’ and experiencing vaginal dryness which she treats with KY Jelly, she now feels ‘grown up’ and more mature. She is delighted to be entering a new stage of life where she is no longer controlled by her biological cycle.

Cheryl was interviewed for Healthtalkonline in April 2009.

Yes, the dryness and I can’t remember when we first noticed that. It’s probably about the time that I went on HRT I think but then that’s supposed to help I think isn’t it actually. So probably about four, no three years I should say that I’ve noticed that I’m much much drier.

Is that now or is it?

What since you gave up HRT?

Yes, I think I’m sure we noticed it while I was on HRT as well. But because it didn’t seem to make a lot of difference that wasn’t a reason to stay on HRT we felt.

And how did you overcome the problem?

Simple, KY Jelly. Yes. Just as simple as that and it’s just a routine now.

I managed finally to get an appointment with our lady doctor. About my age and she has recently retired but she was always very good, very very supportive in anything. So I went along and she never hurried any of the patients, so there was always a long queue for her. And I remember being with her for about an hour and she had the box of tissues ready and I just wept and sobbed and told her all about it and she was marvellous, she just sat back and listened. And this is when she felt that we needed to consider something like HRT, to see whether that would help.

What did you talk about in the consultation? If you can remember back?

Well I was trying to explain how these moods seemed to be taking over and how I felt that this wasn’t right and I think perhaps by then I might have thought well is this to do with the hormones, or is there something else that’s going on. But she was more or less able to reassure me straight away that “it sounds like hormonal,” she said, then like you she said “tell me about it” and I would tell her that, how I felt about things that were going on and my reaction if somebody said the wrong thing, put something in the wrong place. Very sad really isn’t it but I think having someone to talk to and who gave me all the time that I needed to just to get it off my chest was one of the best things possible. So that really helped. That it was recognised.

I was recommended, yes I think in fact, yes recommended by the GP first, so this must have been after when I think probably when I saw her when I was 46, and she recommended evening primrose and then I’m trying to think of the other one, the name’s gone, oh gosh that’s another sign of ageing isn’t it. What is the name of the tablet, oh she put me on magnesium as well that’s another one, so it was the evening primrose, the magnesium and I think there was something else and it’s slipped my mind and I can’t think what it is. But I didn’t find anything helpful.

Did you take them for long?

A couple of years. Yes, but I didn’t find it actually helpful.

Have you made any changes to your diet and lifestyle?

Ah, no. I don’t think I have really. I eat the same, because I eat well and I probably shouldn’t drink quite as much as I do but that’s one of the pleasures of life isn’t it with friends especially. So no I don’t think I’ve really made a lot of difference.

Exercise, we lost our last dog five years ago and we’d had her for a good fifteen years and we had a bit of a break when we had lots of holidays and we just felt that we couldn’t replace her. But then a year ago we decided we needed to have another one for both our sakes, that we wanted to ensure that we got out every day and it’s a wonderful excuse and living here in the countryside and it’s marvellous so, yes we both get plenty of that exercise. I don’t swim a great deal. I have done pilates and I’m probably going back to that after Easter because there’s a class in the village. I’ve done belly dancing, but apart from that not a lot.

Right, I suppose it often happens and other women will find this that it’s as your children perhaps are teenagers, growing up, so obviously there can be sort of underlying aggro in the household anyway. But I felt that it was becoming more obvious that I was not able to cope and I would fly off the handle at the slightest thing. And I’d be more critical, my poor husband suffered I think. I became quite nit picking about things and I think he found that difficult. And before we realised what it was we struggled basically, we felt that something was wrong, what was the matter why was I feeling like this. But we didn’t really connect it with the menopause at all. Just thought it was one of those things and I was just irritable but it was horrible really.

You said “we struggled”. What do you mean?