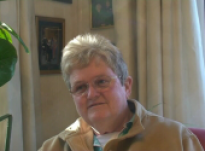 Age at interview: 60
Brief Outline: With a history of irregular periods, Carolyn did not realise she was going through the menopause until a blood test, a year after her last period, confirmed she was postmenopausal. She sailed through the menopause, experiencing no unpleasant symptoms.
Background: Carolyn is a retired police officer. She is single with no children. She started the menopause in her early fifties and had her last period at 53. Ethnic background/nationality' White British.

Carolyn describes her menopause experience as ‘very boring and straight forward’. Having always had irregular periods, she was not perturbed when they became lighter and more spread out in her early fifties. Realising that she had not had a period for a year, she asked her GP to carry out a hormone test as part of routine blood tests to see if she had reached menopause. The test confirmed that she was postmenopausal.

Unlike friends and colleagues, Carolyn cannot recall having any symptoms at all. For her, reaching the menopause has meant freedom from fear of pregnancy, as well as from ‘the nuisance’ of periods and having to ‘mess around with tampons and towels and things’. As a single woman, she has no regrets about not having children. Although taking medication for a number of chronic health conditions, Carolyn enjoys a very active retirement. She is involved in her professional association and does a range of voluntary work. She has lost weight thanks to a healthier diet and keeps fit by walking her dog.

Carolyn speaks of the difficulties faced by some women in her profession as they go through the menopause. She explains that they often struggle with moods and find it difficult to cope, not realizing that their symptoms are caused by the menopause. In a predominantly male environment where discussion of women’s health issues is considered inappropriate, the problem is exacerbated, with colleagues being unfairly ‘branded as just hysterical women’. A recent workshop on the menopause for women in the workplace has helped raise awareness of symptoms and treatments available. Carolyn feels that women should not be afraid to accept that they are going through changes and may need to consider treatments to alleviate their symptoms. She gives the example of one colleague who has turned to HRT to enable her to continue working and progress in her career.

In taking part in this study, Carolyn is keen to present the other side of the menopause story. She stresses that women do not necessarily ‘go into a decline and have a lot of problems’.  She acknowledges, however, that she has been fortunate in having a ‘good’ experience of the menopause, and accepts that this is not the case for everyone.

Carolyn was interviewed for Healthtalkonline in March 2009.

Carolyns periods had always been irregular so she didnt really notice the menopause had started...

Carolyns periods had always been irregular so she didnt really notice the menopause had started...

My periods had always been fairly irregular certainly as I got older, and so I didn’t really think, I never really knew if I was going to have one or not it just happened, when they came they came. So the fact I hadn’t been having any didn’t really register either until eventually I began to think well it must be getting on for about a year which I know is the time that they say. And I was having some blood tests done for something else so they threw in the a hormone check as well and I was decreed that I was through it and I have to say I don’t think I’d had any adverse effects at all.

Carolyn had no adverse effects at all during the menopause. She thinks its important to remember...

Carolyn had no adverse effects at all during the menopause. She thinks its important to remember...

I know I feel a bit of a fraud but I sailed through it really fortunately without the need for HRT or anything else.

I have said this to other people that sometimes I think doctors even forget that not everybody’s ill and that actually I’m sure I’m not alone in actually having had a good experience if you want to put it that way. And so sometimes I think you do need to put the good side as well and that you don’t necessarily all go into a decline and have a lot of problems. But I mean there was nothing I could do about it, it’s just that I’ve been fortunate, that’s the way it’s been for me but I say I’m sure I’m not the only one. It’s like doctors I’m sure sometimes think everybody’s ill because they only ever see people who are ill. So just bringing a bit of good news if you like.

Carolyn describes how research on the effect of the menopause on women police officers has helped...

Carolyn describes how research on the effect of the menopause on women police officers has helped...

And yes I do know that some people have really been struggling and when we had our day, when we actually launched the report that we did that from the research that got done from [name of university], I mean there were some real horror stories came out then and not just police officers but from staff as well and I think some of them perhaps hadn’t realised that this was what they were suffering from. They knew they were being moody, they knew sometimes they found it difficult to cope but they didn’t really understand why. And for some of them it was really good. The light came on and they realised, and then they realised that there was actually something they could do about it as well. And from after we’d had that research done and what have you and carried on and things it crops up now and again and I know, well I’m quite sure that there are some, particularly the more senior women officers, who have struggled and not realised that this is what was causing it.