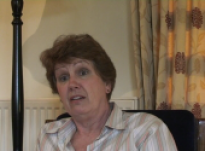 Age at interview: 52
Brief Outline: Barbara has had erratic periods, hot flushes and mood swings since her mid-thirties. Unable to take HRT, she tried complementary therapies without success. She found it hard to cope with the menopause in a physical, male-dominated working environment.
Background: Barbara is a retired army officer. She lives with her partner and has no children. She started the menopause at age 35. Ethnic background/nationality' White British.

Barbara did not immediately associate her increasingly heavy and irregular periods in her mid-thirties with the menopause until she began to have hot flushes. After trying herbal remedies such as black cohosh, agnus castus and evening primrose oil without success, she consulted a complementary therapist. At considerable expense, she was prescribed ‘a cream that I had to rub under my armpit and down in the groin’ to restore the hormonal balance. This had little effect, however.

Barbara considered going on HRT and talked to a number of GPs about the risks. A history of cancer in the family and a belief that taking HRT would just ‘put off the inevitable’, however, convinced Barbara that she should continue to deal with the symptoms of the menopause without taking medication.

As a menopausal woman working in a male-dominated environment, Barbara found it increasingly difficult to carry out the physical training demanded of her job. She describes the embarrassment on one training exercise when, after completing sit ups and press ups with a young male recruit, she discovered ‘blood underneath’. Expected to live in barracks and complete eight mile marches at the same rate as younger recruits regardless of how she was feeling, Barbara realized that it was time to leave the army at age 45. Her retirement has freed her from the stress associated with her job and helped her manage her symptoms.

Since leaving the army, Barbara has put on weight despite maintaining a sensible diet and keeping active. She associates this with the menopause. Despite believing she had reached the end of the menopause two years ago when her periods stopped completely, she had another period a year later and then another more recently. She has also experienced feelings of depression which appear to follow a cyclical pattern, whether or not she has a period. She still has hot flushes and occasional sweats at night.

As a gay woman with a postmenopausal partner, Barbara has had considerable support and understanding throughout her menopausal transition. Buying two separate quilts has proved a practical solution to different temperature needs at night. Although she has experienced some vaginal dryness and at one stage used a lubricant, she tends not to bother now. While sex remains an important part of her relationship, she has noticed a decrease in libido in recent years. She is unsure, however, whether this is due to the menopause or to age or to the maturity of her relationship.

Barbara was interviewed for Healthtalkonline in April 2009.

Several GPs I went to, this is out of the Army, after the Army. Some were better than others, some were sympathetic, some would say “HRT, take HRT”. And I didn’t want to take HRT but at one stage they got so bad I went back and I saw them and they said, “Look what are you worried about” and I said, “Well we’ve got a history of cancer in my family and” I said, “there’s that” and we talked, he talked me through it and he looked at the different types and he says, “Look” he says, “I think you should try this one”. So he gave it to me and I came away and I thought “Not sure about this” because I just think you’re putting something off, so I then went on the internet and looked it up and then realised it came from a pregnant mare’s [urine] and I thought “God, they’re keeping these and not giving them enough water and keeping them constantly pregnant and” I thought “Oh, I can’t take that”. They’re still upstairs in the cupboard not been touched. And I just think, I’ve spoken to lots of women and I’m not knocking HRT because it seems that for a lot of women they’ll stand by it, and they say it’s great. It’s only when it got really bad and the depression got bad and I thought I’ve got to take something but I just couldn’t bring myself to take it. Because I thought I’m just putting off the inevitable. I’ve got to go through it at some stage.

I think the important thing is that every woman is an individual and you can’t say “Oh well, the last ten that I’ve seen this has worked for” you’ve got to treat each individual case differently. Listen to what the woman’s saying because nine times out of ten that woman’s already gone and looked it up for herself, she’s gone to the doctor because she’s getting at the end of her tether and she realises that she’s got to go and talk to somebody that’s supposed to be a professional and knows about these symptoms. And I think sometimes they don’t, they don’t have enough patience with you, they don’t sit and listen to you and perhaps give you a bit of sympathy. Because sometimes it’s just the woman wants to talk and just talking to somebody.

Now, because it didn’t work for me I’m not saying that it’s not going to work for somebody else and I know as I say certain things, [partner] took some herbal Chinese herbal things and you know she felt quite comfortable taking them and she felt they helped. The creams didn’t work for me but I’m very impatient. I take it one night and if it’s not working the following day I think, “This is expensive and it’s not working. And a lot of people can’t afford complementary health.

It is. You go for the consultation then you have the treatment. I mean mine down in [city] were £200 each time.

What for the treatment?

Any change in libido over the menopausal time?

Yes I think there has been. But again I don’t know if that’s after the throes of first romance or whether it’s just an age thing or whether it’s a menopause thing. I mean we still both get worked up but not as often and sex isn’t as important. Is that an age thing or is that a menopause thing? I don’t know. You talk to a lot women and they say, “Oh, I haven’t had sex for a long time, don’t want sex”. And I think that’s weird. It’s never stopped me with sex.

It’s just part and parcel of life and you’ve just got to get on with it. But for me I found it quite hard because I was with guys and I was having to still march eight miles with a pack on my back and do a basic fitness test of running three miles in a certain period of time although I got a bit longer because I was a woman and because I was older. But every month it was a complete struggle and I had to time everything. Anything I was doing I had to think about what time of the month is it, am I going to have a period then or not. And it got to such where I didn’t know when I was going to have a period and how bad it was going to be. I can remember one day and I was doing before the run you have to some exercises which are sit ups and press ups and I was doing the sit ups and you have a guy holding your feet and I did the sit ups and I got up and of course there was blood underneath. And I thought ahh. And it’s an embarrassment but of course I’d still got to do the run.

How did you deal with it all?

You used a spade and that was it. There’s no toilets or anything and you’ve got to make sure you’ve got everything with you and because I was flooding all the time I used to make sure I’d take my knickers but I’d have my Tampax and I’d have some towels with me because I thought that if I’m going to be out for so long I may not be able to go, I might start leaking and I don’t want it to come through my trousers and you’ve got to live in those trousers for the next week.

So do you feel it affected your career in any way?

In the early days no but I would say in the last five years definitely. Definitely. I mean I left the Army because I thought the Army changed a lot in thirty years but I mean as I say one of my last tours was with an Infantry Battalion and I was still expected physically to do the same as the men. Well, I mean I was over 40 then and to go out on an eight mile march, I was the oldest woman in the battalion of six hundred people but I was expected to keep up at the same rate. Well, physically any person over 40 is going to find it harder than a 20 year old but as a woman dealing with changing life and changing hormones it was even more so and I thought “This is time for me to leave, I can’t keep up with these people”. And in the Army you have to carry on doing all the fitness until you’re 50. So I think for a lot of women there’s not many women staying till that age.