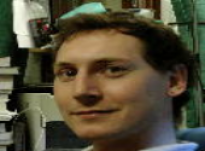 Age at interview: 27
Brief Outline: Seven years ago, Juri was hit in the face with a glass bottle outside a night club. As a result the vision in his right eye is impaired.
Background: Juri works as a support worker with disabled people. He is single and lives with flatmates. His ethnic background is White Italian.

Juri moved to London from Italy eight years ago, one year before his injury. Outside a night club one evening he became involved in a fight to defend a friend. During the fight he was attacked and a bottle was smashed in his face, cutting his eye. He immediately worried whether he was going to be able to see again. He was rushed to hospital and had an operation within the next few days.
When his friends came to visit him at hospital he reassured them that he was going to be ok, saying, “I’ve still got the other eye”, but described how on the inside he was upset about how he looked. One of his biggest concerns was that he would lose his eye and have to use a glass eye. This was not the case.
Later that week, he had a second operation to implant a contact lens in his eye. He described how this affected his vision, saying it was like being “in a car in the morning when there is a lot of condensation on the windows”. Adjusting to the contact lens took some time. Juri said it felt strange especially when closing the eyelid.
When he was back home after a week in hospital, Juri became unwell. He developed a temperature that he described as “the highest fever I have ever had in my life”. He thinks this might have been his body’s reaction to having the lens implanted in his eye. His best friend nursed him back to health again.
Juri attended some further appointments to assess his vision. He was given a hard contact lens to wear. It improved his sight, but wearing it was too uncomfortable so he decided to not to after trying it several times.
Since his injury, Juri rarely ever gets upset about “silly things”. However, the appearance of his eye bothers him and he would like to change it back to the way it was before his injury. He thinks eyes are important “because they express so much. They express everything you want the other person to understand”. He does not like telling people how his injury was caused because he thinks it makes him “look like a bad guy”.

Juri had two operations on his eye. He thinks one was to remove the broken glass from it and the...

Juri had two operations on his eye. He thinks one was to remove the broken glass from it and the...

View topic summary
SHOW TEXT VERSION
PRINT TRANSCRIPT
And what was going through your mind at that time?
Am I going to see again? Because it was all dark and I kept touching it, because I couldn’t believe it, you know. And then everything happened really fast after the accident. The ambulance came and they took me to the hospital. I went into the bathroom at the hospital and I started putting water on the eye because I wanted to try and clear it. I thought that the blood maybe was the reason why I couldn’t see. But it didn’t do anything good and I just waited for, and then I don’t remember anything from there. They gave me a lot of morphine for the next week or something like that. And I guess there were two operations, I think, in that week. I don’t remember much.
Okay and so can you tell me more about the operations you had at that time?
You know I don’t remember much. I think they asked me if I wanted to get a local anaesthetic or a total and I went for the total, because I didn’t want to look at the operation while it was going on. And then nothing. I just remember going to the, to the operation room and they give me something to relax for ten seconds, and then it knocked me out and that’s it. The first operation I don’t remember, though.
Right was that done on that night?
The first operation yes, was done at a hospital near [place], I think. I’m not sure though. And the second one was done at [place].
Right. And do you know what the aim of the first operation was?
The…?
The aim, the reason for it. What were they trying to do?

Maybe take the glass off the eye. And the second one was to try and adjust it I think. Or to implant the contact lens maybe.

Juri sees people staring at his injured eye. This bothers him because the way he looks is...

Juri sees people staring at his injured eye. This bothers him because the way he looks is...

View topic summary
SHOW TEXT VERSION
PRINT TRANSCRIPT
And when you’ve told anybody about it now have they reacted badly towards you?
Depends. Sometime I see people looking at my eye and they avoid asking me. But I know that they’re looking at it you know, because maybe you know, they lose their train of thought or they get like stuck there. And no but usually people who ask don’t get any type of I don’t know maybe empathy, but other than that nothing.

The fight Juri was in when he sustained his injury is on his record. He has to discuss it with...

The fight Juri was in when he sustained his injury is on his record. He has to discuss it with...

View topic summary
SHOW TEXT VERSION
PRINT TRANSCRIPT
Every time I get a CRB back now at the end of it, as in like, it doesn’t affect me when looking for a job, but sometimes, usually I say it beforehand. If not nobody ever said anything to me. Because this is at the end that I got into a fight I would have I would have had charges pressed against me, if it weren’t for my eye injury.
Okay and that comes back every time you apply for a CRB check?
Yes. I wanted to do like I don’t know what, I complain and try to get it off of my CRB, but then they went to the Courts because I used to go and watch like the cases going on and talking to a detective. She said to me, “If it’s not affecting your employability. Don’t do anything for you.” So I didn’t want to go against it, what the detective said, you know. Maybe she was a bit subjective in what she said, because she’s part of the Police Force, but still you know, maybe she was really telling me something good, and I said, “As long as it’s not affecting me, I won’t do it.” I don’t like it though. But because it’s not really what happened you know, it’s not as if it’s written there as if I were meaning something. Because I got angry with them. That is another thing that taught me to be more diplomatic.
So having this on your CRB checks doesn’t affect your employability?
No.
Okay. Has anyone ever discussed it with you in an interview or...?
No. Usually I say to them before, after they give me the job, but before they get my CRB back.
And what do you tell them?

I had a fight when I was younger and the police thought it was my fault as well and it comes up not as in a record, a criminal record, but as in, there is are the last column, that says the last part of it says like, ‘Other things’ or something like that. And even when the police once stopped me on my motorcycle and they said to me, they look at me laughing or something like that you know, because, jokingly, you know, because I don’t look like the type of person who would do something like that, and what was written there was very harsh towards me, against me because of the way I behaved when I was in the interrogation room.

Since his injury, Juri feels he has become more diplomatic and rarely gets angry.

Since his injury, Juri feels he has become more diplomatic and rarely gets angry.

View topic summary
SHOW TEXT VERSION
PRINT TRANSCRIPT
From every bad experience you have there is always something good that comes out of it.
Yeah.
Especially from bad experiences usually. Those are the ones that teach you. Yes.
What do you think the good things were that came out of this experience?
Now. I don’t know if it’s because of it, but most likely it’s because of that, I would rarely ever fight, especially for silly things, you know. Sometimes people get angry because we get pushed on the streets, or you know, because somebody says something to them, and that wouldn’t even be enough to get me into a fight any more. I rarely get angry now. I actually, almost despise anger.
Previous Page
Next Page