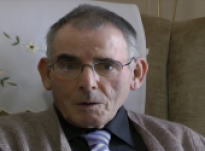 Age at interview: 79
Brief Outline: Around 2003/4, when Derek was 65, he was fitted with a urethral catheter. He had lots of problems with bleeding and blockages. About 9 years later, the catheter was removed after he had laser surgery to his enlarged prostate. He is now catheter free.
Background: Derek is a retired fork lift truck driver. He is married and has 2 adult children. Ethnic background/nationality: White British.

About 40 years ago, when Derek was working as a fork lift truck driver, he noticed that he needed to go to the toilet a lot, especially at night, to urinate. He was referred to an urologist and, after various tests, said that he was told that he would have to live with the problem.
Derek carried on working and living with the problem and was eventually referred to hospital again by his GP. This time, he was told that he had an enlarged prostate, which was causing the bladder problems and, because of other health problems, doctors would not be able to operate on him. Derek had had various health problems. In 1969, he’d had heart failure and in 2002 a metal valve had been inserted. He’d had 4 heart bypasses and, in 2005, was diagnosed with Parkinson’s disease. This is is a degenerative disorder of the central nervous system. As well as other medications, Derek takes warfarin every day, a blood-thinning tablet.
When Derek’s bladder problems got worse, he was told to self catheterise. The first time he self catheterised, he had no problem. The second time, however, he started bleeding and, as on future occasions, had to go into hospital. Shortly afterwards, around 2003/4, when Derek was 65, he was fitted with a urethral catheter. For the first 2 or 3 years, his catheter was changed every 8 or 9 weeks by a district nurse at home. Later, however, he had to get it changed at the hospital because he would always bleed afterwards.
Derek said he often had emergency situations because he was bleeding or because the catheter had blocked, so he was in and out of hospital. Eventually, he was referred to a consultant who told him that he could operate on Derek’s enlarged prostate using laser surgery. This would enable Derek to be catheter free, after having lived with an indwelling catheter for 9 years.
Derek said that, before the operation, he had to stop taking warfarin and his stomach was injected with another medication. He stayed in hospital for a few days after surgery because he’d got an infection. At home, he recovered well and can now go to the toilet normally, without needing to go overnight. Derek said, ‘It was a blessing when I could go to the toilet without a catheter in’ and that he was grateful to the doctors who treated him. He said he now has good and bad days because of his Parkinson’s but not because of his bladder.

Derek had an enlarged prostate. His first attempt to catheterise was successful. After that, he...

Derek had an enlarged prostate. His first attempt to catheterise was successful. After that, he...

View topic summary
SHOW TEXT VERSION
EMBED CODE
PRINT TRANSCRIPT
I used to go to the toilet a lot. At night, I used to go a lot. In and out of bed. And I didn’t used to do much, did I? And I went to see a urologist then at the hospital, and he checked it like a steel rod. Like a rod like what they used. And I said at the end of it all, when he came to see me after, it was day surgery. He just came back to me and said it was something I’d have to live with. And so it carried on and carried on for quite a while too. I finished up going to the hospital again through my own doctor. ‘Cos he, the consultant, it were then, and he told me that I’d got an enlarged prostate. But, because of the warfarin, he couldn’t operate.
Then it got a bit worse after that and I went back and they gave me a catheter to self-catheterise myself, so I had to do that. And the first time I did it at home, it worked well didn’t it? The first time I tried it at home it worked well. The second time I bled, so I rung them up at the hospital and told them what had happened. And they said, “Well, you’re probably alright Mr Robinson, you know something new.” But it was never alright. Every time I did it, I went back into hospital.

Being catheter-free has been life changing. Derek can go out without worrying and sleep through...

Being catheter-free has been life changing. Derek can go out without worrying and sleep through...

View topic summary
SHOW TEXT VERSION
EMBED CODE
PRINT TRANSCRIPT
Derek' I think it’s been more of a proper life change. It’s been a big thing. I mean when they said, “Do you want to be catheter free?” I just couldn’t believe it, you know, what do you have to do to be catheter free? Only an operation.
So it’s had a big impact on your life having the catheter and being free of it.
Derek' It’s had a big impact on my life for a few years now. For long enough, I could never, I couldn’t have a decent carry on because of the catheter always having to be there.
Yes. And I guess that also had an impact on you as well?
Wife' Yeah, yeah.
Derek' I don’t stop out of bed lately. I go to bed a bit earlier than what I’ve ever used to. I go to bed about nine, quarter past nine, and I can go through to the next morning, about 5 o’clock in the morning before I need to go to the toilet.
That’s good. So you get…

Derek and his wife feel that he is ‘just a number’. Hospital doctors are very busy and can be...

Derek and his wife feel that he is ‘just a number’. Hospital doctors are very busy and can be...

View topic summary
SHOW TEXT VERSION
EMBED CODE
PRINT TRANSCRIPT
How have you felt about the healthcare, have you been happy with the healthcare and information you’ve been given or they haven’t really given you a lot of information?
Derek' You’re just a patient love, aren’t you?
Wife' You’re just a number, aren’t you?
Derek' I mean at one time they just tell you what they want you to know, but they’re very busy in hospitals and you don’t like upsetting them.

Wife'  You’ve got to be grateful for what you get done I think.