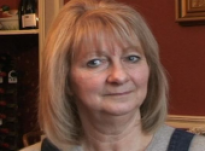 Age at interview: 63
Age at diagnosis: 47
Brief Outline: Wendy was diagnosed with breast cancer in 1993, and underwent a lumpectomy and radiotherapy. She is now 16 years post-diagnosis.
Background: Wendy is a semi-retired hotelier. She is married and has two grown up children. Ethnic Background: White British.

Wendy was diagnosed with breast cancer 16 years ago, and underwent a lumpectomy and six weeks of radiotherapy. Recently, she experienced lymphoedema, but found that the lymphoedema nurse was helpful in prescribing arm sleeves and massage. Aside from the lymphoedema, she is not experiencing any other side effects of cancer and its treatment.
Generally, cancer is not something that Wendy thinks about on a day to day basis, although things can trigger thoughts about cancer. For instance, if someone else was diagnosed with cancer, or if something was in the media.
Wendy found that having a group of close friends and a supportive family was very helpful in getting her through her diagnosis, and may have helped her put cancer in her past. She is still able to continue to work and decorate. Her message to others with cancer is to be positive and to make the most of life.

Wendy describes how she first got lymphoedema 14 years after her breast cancer surgery, and feels...

Wendy describes how she first got lymphoedema 14 years after her breast cancer surgery, and feels...

View topic summary
SHOW TEXT VERSION
PRINT TRANSCRIPT
I’ve had no really bad side effects luckily, until about I think it was two years ago I tripped over in the garden and my arm swelled and it was lymphoedema. Now I think some poor people can get this when they’ve had radiotherapy, and I’ve been very fortunate that it’s taken, must be I suppose fourteen years for it to affect me. But with exercise and wearing a sleeve that’s under control, and I think that’s probably been the worst side effect that I’ve had to suffer. So I’ve been very fortunate.
Can you talk me through a bit about how you realised what it was and where you went to sort of find out what it was?
Right. Well, I just thought my arm had swollen quite badly because I had fallen over and landed on that side. The doctor took a different view and said because of my history I ought to be checked out, and he immediately sent me to see [name] the oncologist. And she then said, “Well, because of your history, once again, you ought to have an MRI scan.” She was very reassuring and said, “I don’t think it’s anything sinister, but to be sure.” And that’s what I did. And as soon as the results came that nothing sinister had happened on the MRI scan I was sent to see a woman who deals, she has a lymphoma clinic.
And it’s at the community hospital in [town] and I can call in whenever I want to. So she’s a good point of call as well actually and she gave me a massage to do, and these awful elasticated sleeves, which are very uncomfortable in the summer but because I didn’t want a big fat arm I kept going with the massage and, touch wood, it has gone down considerably and I don’t always have to wear the elastic sleeve. So, positive.
So you didn’t enjoy wearing that sleeve?
No, only because it was uncomfortable, you know, but it gave masses of support and I didn’t stop doing anything. At the clinic I was told, “Oh, well. If you want to get out of ironing now is the time.” But I’m determined, I don’t want to, I want to do everything I always do.
Just going back to sort of the lymphoedema, which I know…
Yes.
…you’ve talked a bit about, but I just wanted to touch on one last thing. Is there anything that your GP can now be doing to help with the lymphoedema, or are you still experiencing any problems with it?

Well, I really, he wouldn’t be the one. I would go to the woman at the lymphoedema clinic because, once again, I’ve got her number and this is national health actually, so I have her number and I could have an appointment normally within the week. So, you know, that’s a pretty good service that’s offered. And if I need more sleeves or anything, if I’ve been decorating and got paint all up them and stuff, she’ll send me some new ones. And I mean she made me feel gloomy at first because she said I would always, I’d never get rid of the swelling, and it was huge. It was quite a big, you know, arm, so that was a bit of, a bit depressing but because I thought, “I’m not going to put up with this. I’m jolly well going to do this massage.” And I did it twice a day and I never missed. I’ve been a bit naughty just recently because, of course, it isn’t so swollen, but if I do feel it tightening or anything I immediately start those massages and they do work. So yeah, so she gave me very good advice.

Wendy was brought up on a farm eating organic fruit and vegetables so believes her diet is...

Wendy was brought up on a farm eating organic fruit and vegetables so believes her diet is...

View topic summary
SHOW TEXT VERSION
PRINT TRANSCRIPT
Has anyone ever suggested things that you could do to prevent cancer coming back?
Well, not drink too much, and diet, were the two things I was told, and once again, I’m not obsessive. I’ve always eaten healthily and I grew up on a farm in [name]. It was all organic vegetables and things, so if that should prevent it I shouldn’t have got it in the first place, is how I feel. I do drink. I have wine with my supper every day, and to be honest, I’ve no intention of stopping that because you’ve got to live your life, and another honesty is I don’t want to become eighty-odd with dementia living in a home. So I’ll just enjoy life. That’s my motto.
So in terms of sort of changing things, you haven’t really changed or felt that you want to change things?
No, I possibly take more exercise now than I used to, but that’s probably because I’ve got more time now. The children are no longer at home and so on and I am semi-retired from the business. I think I’m more aware of what I eat and of what I drink. I mean I’ve never drunk a lot. I’ve only ever had a couple of glasses of wine with food. As I say, I do think exercise is very important now. It’s important not just for the body but for mental well-being, so it’s lots of good walks.
And usually with a friend, so that’s therapeutic as well. I think everybody should have a friend to walk with.
Previous Page
Next Page