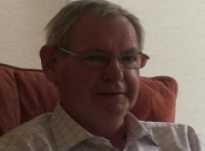 Age at interview: 67
Age at diagnosis: 57
Brief Outline: Michael was first diagnosed with breast cancer in 2000. Had a mastectomy and 11-12 lymph nodes removed, followed by radiotherapy and tamoxifen. Found another lump in 2008 which was also breast cancer. Had a lumpectomy, followed again by radiotherapy and Arimadex
Background: Michael is a retired medical technician. He is married and has 2 adult children. Ethnic Background: White British (English/Irish).

When Michael first found a lump on his chest he was immediately suspicious; he immediately thought that it was breast cancer and he went along the next day to see his doctor. A (female ) friend of his had recently had breast cancer. He was referred quickly and soon had a mastectomy as a day patient. Two weeks later he returned to have 11 or 12 lymph nodes removed. He experienced some lymphoedema after the surgery. There was then a delay of a few weeks before he started 15 sessions of radiotherapy. He was prescribed tamoxifen which he took until just after he was discharged in 2006.
In 2008 he found another lump on his other breast. This time he had a lumpectomy and the removal of just 2 lymph nodes which he described as ‘a piece of cake’ in comparison with his first experience. He again had radiotherapy, followed by a course of Arimadex.
Because he had had two separate diagnoses of breast cancer, he was offered genetic testing, and he was not surprised when that showed that he had BRCA2. He was advised that this put him at higher risk of also developing prostate cancer and it was suggested that he should have further checks. These showed signs of early pre-cancerous changes in his prostate. Somewhat reluctantly he went on to have a prostatectomy which he was recovering from at the time of his interview. One of his sons had gone on to have testing for BRCA2 which thankfully proved negative. Michael did not know about his biological family history because he was adopted.
Michael has a close and supportive family and good support from his religious faith and his friends in church. He felt very well treated throughout his treatment for his breast cancer and well supported by family and medical staff through the whole process (in contrast with his experience of prostate cancer surgery). He thought that there was quite a positive difference in the information that he was given at the time of his second diagnosis in 2008 in comparison with 2000. In 2000 he had felt that the literature he was given was all aimed at women, but by 2008 things had improved and the material was less gender-specific. Most of his treatment was in the hospital that he worked in and he felt it was a real advantage to be treated in a familiar environment. He had found it helpful to be able to tell people about his breast cancer and to be able to talk about it.

After having a 2nd breast cancer removed, a genetic test showed that Michael had a faulty gene;...

After having a 2nd breast cancer removed, a genetic test showed that Michael had a faulty gene;...

View topic summary
SHOW TEXT VERSION
PRINT TRANSCRIPT
I then was sent a letter, suggesting I should have a DNA check, because I’d had it twice and they were again… this was slightly different cancer so it showed more…. they said a predisposition towards cancer than just breast cancer. So I did, I went to a [name of city] hospital and they took a sample and it came back that BRCA2, which is one of the genes apparently that protects you from cancer, was altered, which put me at a greater risk of breast cancer and prostate cancer, and suggested I had my prostate examined, which I did. It felt normal, the normal sort of feeling at the examination but they decided that, under the circumstances, they would do a biopsy, which proved to be positive that there were some very early signs. It wasn’t… it was more than nothing but it was signs of altered cells, pre-cancerous I think they call them or something, so, you know, they discussed it with me and somewhat reluctantly I had a prostatectomy, which was a much bigger operation. It involved more than just an overnight stay in hospital. I was in a week, it was very unpleasant, I had a lot of pain and it wasn’t a nice experience at all.
And you did say when you were talking about the prostatectomy, that you were a little bit more reluctant to go ahead with that operation.
Yes, I think there were two… one of the factors was of course, that I’d probably… according to the, again very good support from a prostate support counselling nurse, that I would have probably not actually seen any symptoms for six to eight years. Also, there is an age cut-off point to when they will not do that operation. They will offer you something else. They couldn’t offer me radiotherapy because I’d already had what was pretty close to the maximum dose that people should actually have, so there was no real other option because the hormone treatment… it’s really for people who have advanced cases. So it was a little bit…’this is what… you can either do nothing or have a prostatectomy’, and in the end I, a bit reluctantly I will admit, I went for it because… they said, well you’re still young and fit enough to do it. If you leave it and you become unfit, we won’t be able to do it and the treatment will be far worse, and so I was, you know, a bit reluctant but I did, you know, have it done. It was not a good experience.

Michael’s breast cancer recurred in the opposite breast and he had the lump and two lymph nodes...

Michael’s breast cancer recurred in the opposite breast and he had the lump and two lymph nodes...

So, 2006 I think it was, I got a piece of paper that really meant it said, ‘discharged’ on it, so I had to continue to take the tamoxifen for a little longer, and that, as far as I was concerned, was it, until 2008. I was… I discovered a lump in my other breast actually. This time I was… I found it, I have to admit, I was not good about checking my breast regularly, and I’d actually been doing the decking with paint, and I thought, my arm feels tired. And I felt… and I thought, ‘oh bother, there’s a lump there’. So again, I went to the doctor. He said, “Yes, you’ve got a lump”. Went through a similar procedure but I’d noticed that in the eight years that things advanced. There was… all the paperwork was a lot less gender-specific and some of that was due to my comments, and this time they had developed a new way of checking the lymph nodes which… well they do, they look at the sentinel lymph node and they put a wire… they put some dye into your breast. It goes to the first lymph node and they check it on the ultrasound and they put a wire in there to mark it, and this is the day before you have the operation. You go in and they removed, this time, just a lump from my breast and the first two lymph nodes, which was comparatively minor to having sort of most of them removed. And I recovered even… by then I had retired, so it was a lot easier, and because it seemed like this, well… a piece of cake, really.