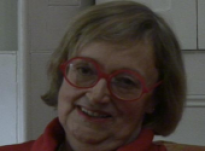 A friend spotted a lump on her cheek. As she was having dental work she rang the on-call dentist (it was a Saturday) who prescribed antibiotics, after which her usual dentist referred her to a maxillofacial surgeon who did an x-ray and CT scan. The lump was removed and the pathology results revealed low grade non-Hodgkin's lymphoma.
She was referred to an oncologist who recommended no treatment. Two to three years later another tumour appeared on her face so she was given chemotherapy tablets. Over the next few years tumours kept appearing, which were treated with oral chemotherapy and radiotherapy.
A high grade tumour developed in her groin and grew rapidly while awaiting surgical removal. She developed breathlessness caused by fluid on the lungs (pleural effusions), which had to be drained before the operation. While having injections to stimulate her stem cells before harvesting for a transplant she needed blood transfusions to counter anaemia. The transplant was postponed because of further breathing difficulties and she had fluid repeatedly drained off her lungs and finally an operation to stick her pleura together. During this time a cocktail of chemotherapies was administered through a Hickman line, which got infected.
Finally, with a very poor prognosis, she had her stem cell transplant. She had an allergic reaction to one substance in the high dose chemotherapy but the transplant went ahead. She contracted septicaemia afterwards and antibiotics were administered through her Hickman line since the veins on her hands had collapsed. Once at home her septecaemia recurred. She was readmitted and believes she nearly died. However, she recovered and the Hickman line was removed, which proved to have been the source of the infection. Apart from a bout of pneumonia she has been well ever since and a CT scan has shown her to be cancer-free.

While having mild chemotherapy for slow growing lymphoma a new aggressive tumour appeared in her...

While having mild chemotherapy for slow growing lymphoma a new aggressive tumour appeared in her...

View topic summary
SHOW TEXT VERSION
PRINT TRANSCRIPT
Anyway when I was going back to be monitored regularly because of the chemotherapy tablets I was taking, a little tumour in my groin was looking just a bit bigger than it perhaps should have been. I’d say it was about the size of a Malteser, and that was enough for the surgeon to think, well it could be a high grade lymphoma, but to be on the safe side they sent me to a surgeon to do a biopsy. And that was fixed for a bit less than three weeks later. And in that three weeks the tumour that started off as the size of a Malteser grew to the size of a cowpat. It grew absolutely phenomenally, and I thought, “Oh dear, should I get in touch with them and tell them?” And I thought, “I don’t want to be a scaredycat”, and I know that one week in the life of a tumour is not a long time, which in fact is almost true almost every time, but in my case it was a bad idea because I was due to go in on the Tuesday for day surgery to remove this, it had been a little tumour, and on the Saturday night and the Sunday night I’d found, when I lay down to go to sleep, I couldn’t breathe properly, I had to sit up. This seemed to me very funny. I’m asthmatic, so I took a bit of extra asthma medicine; that made no difference and it didn’t seem like asthma anyway.
So I was very puzzled by this, and on Monday morning, the day before the due date of the biopsy anyway, I rang the registrar at the hospital, who said, “We’ve got a bed, come on in”. So I came on in, went on the bus carrying a little holdall, slowed down a bit by my breathing. And it turned out that I had something - they recognised this straight away - called pleural effusions. And that is, normally your lungs aren’t attached to your rib cage but they abut closely, there’s no spare space. Well there’s a minute amount of space and that’s normally washed through with lymphatic fluid that comes in at one end and is drained off at the other. And what sometimes happens in late cancer is that the drainage duct that siphons it off gets blocked with a tumour, and when that happens - or partially blocked - fluid builds up and your lungs can’t expand. And so they drained my pleural effusion.
And by then the tumour, I suppose it would probably have been about that big, but because it was in my groin and I spent a lot of time sitting down, it was like a cowpat with a fold in it. And it’s, you know, you couldn’t have worn tight fitting clothes, it would have been too visible. Anyway if I’d gone a week early I’d have saved all the pleural effusion and it might have made an enormous difference to the whole of the following story. But anyway, I didn’t, and they then had an argument between the surgeon and the oncologists about how much they’d take out. Because the surgeons, they wanted me to start chemotherapy as soon as possible, and that meant making the smallest operation they could so that the healing was minimised. But in the event the surgeons who took out, were going to just take out a bit of the tumour, took it all out because it had liquified and died, the cells had died in the middle, so it was a bit of a mess.
Previous Page
Next Page