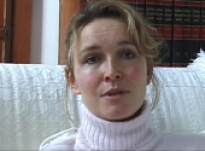 Nerve damage from a hysterectomy for cervical cancer left her unable to feel when she needs to...

Nerve damage from a hysterectomy for cervical cancer left her unable to feel when she needs to...

View topic summary
SHOW TEXT VERSION
EMBED CODE
PRINT TRANSCRIPT
So it was only that, it was the numbness and just having to remember, I had to remind myself to go to the toilet, which is very bizarre, very bizarre thing. But again, you know, I sort of go round it, my daughter was being toilet trained when I got home, and so I just used to, when she went I used to go too.
So you didn't have the feeling that you needed to go?
No, and I still don't fully. I've replaced it with other things, I've realised I've replaced it with other feelings. When I know my stomach feels full, that's when I go, so I've sort of replaced it with a different way round. And I think it's unlikely that people have that, I think they said it doesn’t normally happen that it never comes back, I think it's normally just temporary but for some reason it can't have reconnected somewhere down there. I think it's where they cut the urethra, it’s just whether that re-forms, the nerves for some reason didn't sort of, don't sort of reconnect for me.

When having a hysterectomy for her cervical cancer she felt that losing her fertility was not an...

When having a hysterectomy for her cervical cancer she felt that losing her fertility was not an...

View topic summary
SHOW TEXT VERSION
EMBED CODE
PRINT TRANSCRIPT
I was only 32 so, and I'd only had one child. And at that stage I can honestly say I was quite happy with one child. Okay it upset me, I didn't, I really, really didn't want the operation but I was more concerned that I stayed alive for the daughter I did have than, you know, any sort of concerns of having another one. That didn't hit me till quite a lot later.
How later was that?
I think 2 years after, when I thought that I should stop worrying about am I going to live or aren't I going to live, I thought I would feel a lot more confident at 2 years, and I didn't. So I think I probably had quite a big dip at 2 years. And it's probably been only since I've had a 5 year clear that I've been incredibly broody, I would love to have another child, and it has hit hard.
I think it's been the fertility side that I think has been the hardest thing since. I think because I, you know, hopefully I've not completely stopped worrying about my health, but I do feel that it is over and done with as far as I can tell. So it's been harder sort of not, knowing, you know, knowing that I can't complete my family, the sort of image of the family that I wanted, I wanted two children. And so that's been the toughest part. And going back and reading my notes, and I remember saying quite clearly it wasn't an issue at the time. And it wasn't, it wasn't an issue, but I think 5 years on it is an issue for me.
And how do you cope with those types of feelings, how do you find ways to cope?
I suppose that ever since I've had the illness, because we'd just moved house I focussed on my daughter very much and just on having things to enjoy. I've made sure I've, you know, treated myself to holidays and I've done all sorts of things that I know I wouldn't have done otherwise. Then two years on we decided to move house again, and it was the Friday before she started school on the Monday, so very, very good timing, because I was aware that there was going to be a void. And I guess that void will come again in September when, you know, I've finished the house and I know I want to move on and do something else, and it's making that I focus on another project to give me that satisfaction that I can't get from having another child. I guess that's probably the way I've looked at it.

She says her friendships and family relationships have strengthened because of the support she...

She says her friendships and family relationships have strengthened because of the support she...

View topic summary
SHOW TEXT VERSION
EMBED CODE
PRINT TRANSCRIPT
And has it had an effect on your relationships?
Certainly the ones with my friends it's made an awful lot stronger. I think it's helped me put more into the relationships, I know how important they are to me. I have an amazing network of friends that I appreciate and I will, you know, make sure that I wouldn't lose. I probably invest more time into them because I just know how important they are. And I think I always knew they were very special to me, but I think it's not until, again, something like that happens that you just realise that at the end of the day they are the most important things, certainly with my daughter, certainly with my husband and my immediate family. And then I think I've got a wonderful web of very close friends around me. So yeah, I think it has, it's deepened them. I can have conversations now that I wouldn't have probably had with them before.

Talking to someone who had been through cervical cancer before her had been the most important...

Talking to someone who had been through cervical cancer before her had been the most important...

View topic summary
SHOW TEXT VERSION
EMBED CODE
PRINT TRANSCRIPT
Is there anything else that you would say to other women who are going through this, you know how to…?
I think personally being in contact with somebody else that had gone through it was a huge help to me. Particularly finding somebody so young that it wasn't something that was that rare. I've since found, and lots of people have spoken to me when they've had abnormal smears, and some people, two people I know have had cone biopsies, and it's been great to be able to provide that support to them. I think it's just being able to have a conversation. Books and information, it was helpful, but at the same time it was also quite scary because you couldn't have that two way dialogue, it was all about how it could be, and the danger for me certainly was that I could take myself too far beyond it. And I think, yes, the most important thing that happened to me was being in contact with somebody who'd had a similar experience.

Surviving cervical cancer meant that this woman made more time for her family, which she feels...

Surviving cervical cancer meant that this woman made more time for her family, which she feels...

I used to try and do full-time work and look after my daughter and I realised that I actually didn't want to do that, that I wanted to make sure I just spent as much time as I could with my daughter. And I have had, you know, five very happy years, five and a half very happy years since, and I know that I wouldn't have had those five happy years had I not had the illness. I would've been very much more focused on my work and trying to keep my CV looking good, and I think it just helps you put things into perspective. You hear people say it but it's probably not till it really happens that, and it is that complete taking the rug from underneath your feet feel, that is horrible at the time but a huge wonderful life learning, and I think if people can hang on to the fact that it will have huge positive sides to it and keep that in mind, that they'll actually probably be pleased they've had it, it will help them with the down days really.